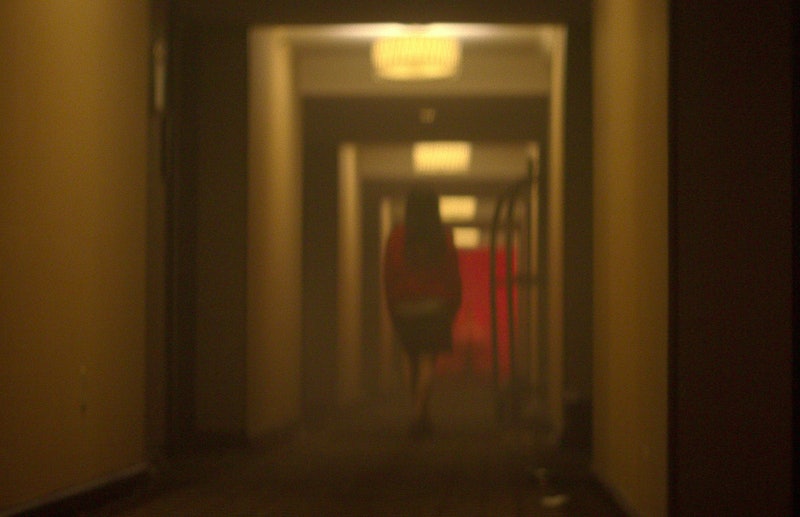 Netflix's new docuseries Crime Scene: The Vanishing at Cecil Hotel revisits the tragic and confounding death of Elisa Lam, a Canadian college student who went missing from the Cecil in 2013. According to the CBC, Lam made an online reservation for a three-night stay in a shared room at the hotel on Jan. 28, 2013. She was first assigned to 506B, but after Lam's roommates complained about her "odd behavior," she was moved to a private room. Her parents reported her missing when they hadn't heard from her by Jan. 31.

Nearly two weeks later, Lam's naked body was found in a water tank on the hotel's roof after guests complained about dark and foul-tasting water. The strange circumstances of the case — including elevator footage of Lam acting erratically — have led to a number of theories about her death. Here are the most popular ones.

Some point to Lam's Tumblr blog, where she often wrote about her depression and anxiety, as evidence that she died by suicide. But as reported by the CBC, the coroner said that "a full review of circumstances" didn't support the idea that Lam ever intended to harm herself.

This is the theory most supported by lead investigator Detective Wallace Tennelle. Lam had a history of bipolar disorder, and Lam's sister told Tennelle that Lam took four medications, including Wellbutrin (an anti-depressant), Lamotrigdine (an anti-convulsant), and Quetiapine (an anti-epilleptic and mood stabilizer).

"My opinion is that she fell off her medication, and in her state, she happened to find her way onto the roof, got into the tank of water," Tennelle said, per CBC. "At the time, I think that water tank was maybe full. But as people used the tank, used water, unknown to her, the level was dropping to a point where she could no longer reach out and escape, and she died that way."

Because of her unusual behavior in the elevator, some have theorized that Lam was misusing substances and a hallucinatory episode led to her death. Lam's toxicology report found no evidence of substance or alcohol misuse, but self-described body language experts have claimed that her actions signaled "a level of emotional dissonance."

Elisa was murdered by someone

Some believe that Lam's elevator video suggests that she was afraid someone was following her. In the footage, she looks out into the hallway before jumping back in to frantically push the buttons. In an episode of Real Life Nightmare, forensic psychologist Cheryl Arutt said "it looked like maybe she was hiding from someone. She seemed to be hiding in a corner, trying to make herself small and be out of sight."

Tenelle said that at one point they did see Lam "come in with two gentlemen" who gave her a box. They were never captured by the cameras again. After her death, Lam's belongings were found in the basement, but Tennelle didn't suspect foul play. "My partner and I tried to figure out how somebody could have put her in there, and it's difficult for someone to have been able to do that and not leave prints, not leave DNA or anything like that," he said.

Elisa was tormented by ghosts

Since its creation in 1924 in Skid Row, the Cecil has been linked to a variety of criminal activities; this includes housing serial killers like Richard Ramirez, aka the Night Stalker, and being the last known location of Elizabeth Short, aka the Black Dahlia. Because of the many tragic deaths that have happened at the hotel, some believe that Lam was hiding from a supernatural entity in the elevator. Many point to her strange hand motions as a sign she was communing with a spirit.

A lot of armchair theorists like to bring up the 2005 film Dark Water, suggesting that maybe someone murdered Lam to copy the events of its plot. They point to the fact that the main characters are named Dahlia (like the Black Dahlia) and Cecilia (like the Cecil Hotel). In the movie, residents at the apartment complex where Dahlia and Cecilia are living complain of dark, foul-tasting water, which leads to the discovery of a girl's body in the water tank on the roof.

Elisa was a tuberculosis test subject

One of the weirder conspiracy theories speculates that Lam was a guinea pig for a new tuberculosis medication. There was a tuberculosis outbreak in 2013 on Skid Row, and theorists pointed out that one tuberculosis test is called the LAM-ELISA.

She opened a portal to another dimension

But by far the wildest theory suggests that Lam died because she opened a door to another dimension. This theory hinges on believing the spooky urban myth of the "Korean Elevator Game." According to the rules, a player has to enter an elevator alone and press a series of buttons in order to enter a parallel dimension. In this new world, electronic devices don't work and there's nothing outside but a red cross. The player is not supposed to leave the elevator, and if a strange woman steps on, they shouldn't speak to or look at her. Some theorize that Lam was trying to play this game when it all went horribly wrong.