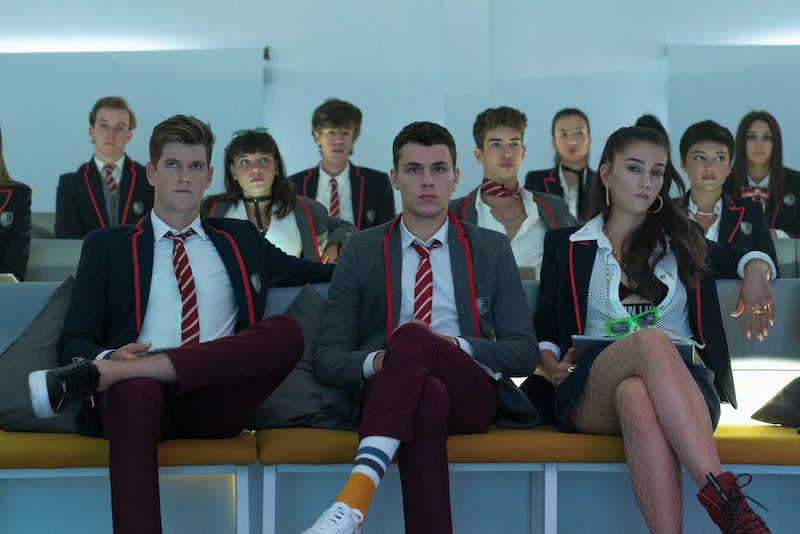 Good news, Elite fans: it looks like Carlos Montero and Darío Madrona’s soapy teen drama isn’t ending any time soon. On Feb. 25, Netflix renewed Elite for Season 5, months ahead of its Season 4 premiere. "I want Elite to be Netflix's Grey's Anatomy. I would love it to last for many seasons,” Montero told the Spanish-language site BLUPER. “I am clear that I do not want it to end.”

Per Entertainment Weekly, Elite Season 5 will conclude the school year that begins in Season 4, which introduces a host of new privileged students. "I am very proud of this new season,” Montero explained. “It was a difficult thing to do because we have lost in the way many important characters, but I think I'm already in love with the new ones. I think we have a very powerful cast and I hope the audience will fall in love as much as I have."

Though the series opened with Samuel (Itzan Escamilla), Nadia (Mina El Hammani), and Christian (Miguel Herrán) — three working class teens who got scholarships to attend the prestigious school Las Encinas — the series quickly grew to follow the lives of several other students on campus. Everyone has a secret at Las Encinas, and what began as a typical fish-out-of-water story quickly ramped up into plot lines about sex, drug dealing, and murder.

Though Montero told Entertainment Weekly that fan-favorite characters like Lu, Carla, Polo, and Valerio are no longer around, he believes that Seasons 4 and 5 still “keep the DNA of the show" alive. With a handful of new characters being introduced, their goal going forward is to explore how this “new powerful group” collides with the old students we’ve come to know and love.

Here’s everything we know so far about the fifth season.

Per BLUPER, filming for Season 5 began in February in Madrid. The show takes about a year between seasons, so there’s a good chance we could see Season 5 some time around February 2022 if that trend continues.

As Season 5 will wrap up the school year, we can likely expect the new characters from Season 4 to return — barring any of them being murdered, that is. Some newcomers include the wealthy Blanco children — Ari (Carla Díaz), Patrick (Manu Ríos), and Mencía (Martina Cariddi) — who are the kids of the new school director. And then there’s Prince Phillippe von Triesenberg (Pol Granch), who ends up falling for Cayetana (Georgina Amorós).

While there hasn’t been a trailer released yet, there are a few Elite shorts that fans can check out. These short stories will likely bridge the gap between seasons, and feature characters like Guzman, Nadia, Omar, and Ander.

More like this
The 'Freeridge' Cast Shared Their Hopes For A Potential Season 2
By Grace Wehniainen
Everything To Know About 'Cobra Kai' Season 6
By Brad Witter
'The Crown' Season 6 Has Suspended Filming "Out Of Respect" For The Queen's Death
By Bustle Staff
Netflix Shut Down 'Bridgerton' S3 Rumours About A “Very Dark” Storyline
By Bustle
Get Even More From Bustle — Sign Up For The Newsletter
From hair trends to relationship advice, our daily newsletter has everything you need to sound like a person who’s on TikTok, even if you aren’t.