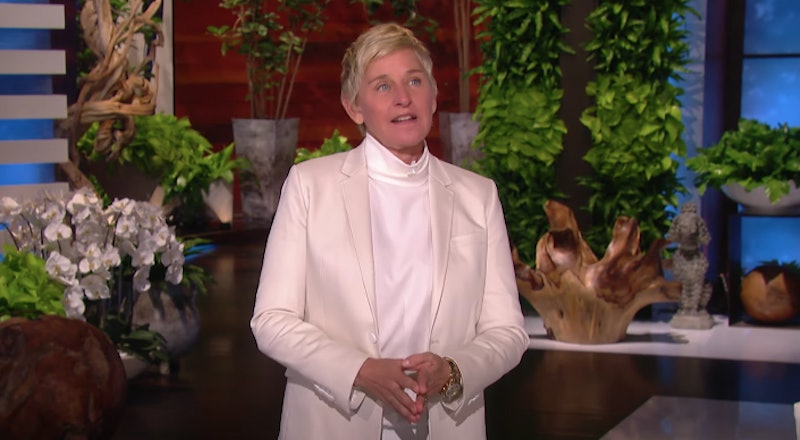 After a tumultuous summer full of exposés and allegations of mistreatment behind-the-scenes, The Ellen DeGeneres Show is back. In her first monologue of Season 18, Ellen DeGeneres addressed the toxic workplace allegations, apologizing for what she admits happened on her watch. "I know that I'm in a position of privilege and power, and I realize that with that comes responsibility," she said. "And I take responsibility for what happens at my show."

While she didn't address any of the specific allegations made against her show — which include racist microaggressions and termination after medical leave — DeGeneres revealed that she and her staff have had "a lot of conversations" about the situation, and promised the audience that things at The Ellen DeGeneres Show will be different going forward. "We have made the necessary changes and today, we are starting a new chapter," she said.

During her monologue, the talk show host also addressed the "articles in the press and [stories] on social media that said that I am not who I appeared to be on TV," and opened up about her reputation as the "Be Kind Lady." After explaining that she started ending her shows with the request that people "be kind to one another" in 2010 because she "thought the world needed more kindness," DeGeneres admitted that "being known as the ‘be kind’ lady is a tricky position to be in."

"The truth is I am that person that you see on TV," DeGeneres continued. "I am also a lot of other things. Sometimes I get sad, I get mad, I get anxious, I get frustrated, I get impatient and I am working on all of that. I am a work in progress." Though she joked about being a "pretty good actress" due to having played a straight woman in the past, DeGeneres explained that she wasn't adopting a character or persona when she stepped onstage to record her show. "I don't think I'm that good that I could come out here every day for 17 years and fool you," she said. "This is me."

Adding that she always wants to be "the best person I can be," DeGeneres then apologized for not living up to that standard. "If I have ever let someone down, if I have ever hurt their feelings, I am so sorry for that," she said. "If that's ever the case, I have let myself down and I have hurt myself as well." DeGeneres also celebrated the "270 people" who work on her show, explaining that "all I want is for every single one of them to be happy and to be proud to work here."

Back in July, 11 former and current employees of The Ellen DeGeneres Show alleged that her producers had created and fostered a toxic work environment in an interview with BuzzFeed; at the time, the talk show host released a memo accepting responsibility for the accusations and promised to "correct the issues" as quickly as possible. "On day one of our show, I told everyone in our first meeting that [the show] would be a place of happiness — no one would ever raise their voice, and everyone would be treated with respect,” DeGeneres wrote in the memo, per The Hollywood Reporter. "Obviously, something changed, and I am disappointed to learn that this has not been the case. And for that, I am sorry."

An internal investigation was conducted into the show's environment, and in August, The Ellen DeGeneres Show parted ways with three producers who had been accused of harassment and sexual misconduct by former employees. Though no official reason was given for their departure, DeGeneres reportedly once again apologized to her staff for letting the show turn into such a toxic environment, according to Variety. "I’m a multi-layered person, and I try to be the best person I can be and try to learn from my mistakes," she reportedly said, offering additional apologies to anyone who felt "disregarded" by her while working on the show.