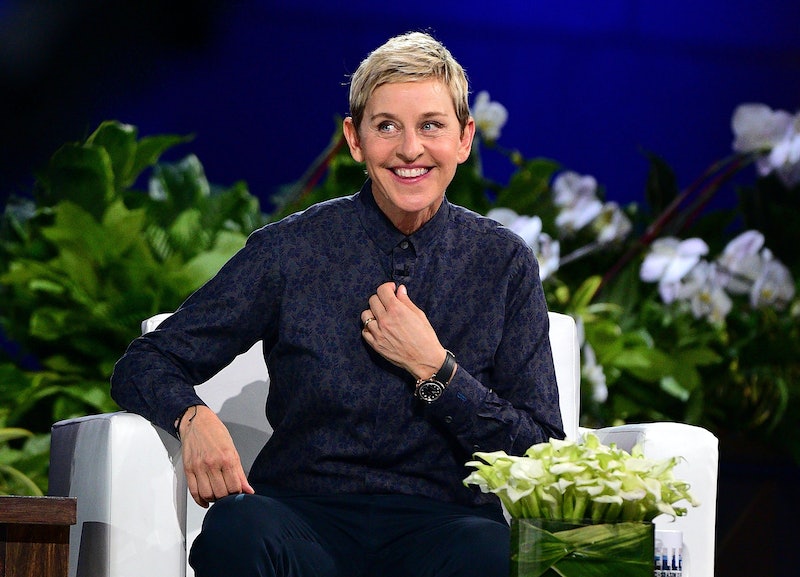 In his first Instagram post since July 24, The Ellen DeGeneres Show producer Andy Lassner addressed the controversy surrounding the talk show. This marked his first public statement since three senior producers — Ed Glavin, Kevin Leman, and Jonathan Norman — parted ways with the show on Aug. 17, after allegations that the top producers had fostered a toxic work environment surfaced. (Leman and Norman have denied all allegations against them, and Glavin hasn't issued any public statement.) Since then, a number of changes have taken place behind the scenes in order to improve conditions for employees and create a safer, more positive experience for staffers, but audiences have yet to hear from DeGeneres herself.

As a top producer on the show, Lassner is often seen on camera, making him a regular fixture for Ellen Show fans. After DeGeneres and DJ Stephen "tWitch" Boss, he's arguably the most well-known Ellen personality, which means fans were eagerly awaiting for him to address all the controversy. The producer began his Instagram video by assuring everyone that he's "back," presumably not just on social media, but also on the show. "I've been away for a little bit, dealing with — you know, some stuff," he said. "You may have read about it. It's been a couple of rough months. But it's when we go through these things, I guess, when we learn the most about ourselves, and maybe even some growth."

Lassner avoids going into specifics about the allegations or discussing details about what the remaining top brass is doing to create a space where workers feel safe coming forward with issues they may be experiencing. However, he did admit that "it's been rough," and that he's glad to be back. "I love you guys; I miss you and I'll talk to you soon," he said at the end of the video.

Earlier this month, DeGeneres addressed staffers via a virtual call and apologized for not being aware of the toxic environment on set. She reportedly told staffers that rumors that they shouldn't look her in the eye were "untrue," and promised that changes would be made to make her show a positive place to work for everyone. "I’m a multi-layered person, and I try to be the best person I can be and I try to learn from my mistakes," she told staffers, per People. "I’m hearing that some people felt that I wasn’t kind or too short with them, or too impatient. I apologize to anybody if I’ve hurt your feelings in any way."

Since DeGeneres spoke with the staff a number of changes have been implemented in the production, including the show's parent company WarnerMedia bringing in a dedicated HR person and creating a hotline for complaints so employees can speak up without fear of retaliation from upper management. Additionally, DJ tWitch has been made co-executive producer, and everyone, including the host, will take part in inclusion and diversity workshops. The Ellen DeGeneres Show is set to return for Season 18 in September.