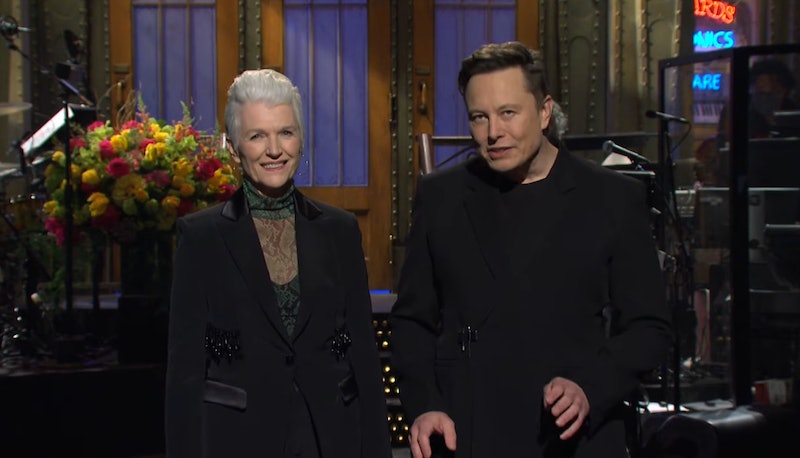 Fortunately for viewers (and NBC executives), Elon Musk’s SNL appearance didn’t feature any pranks or bold moves that would help him “find out just how live Saturday Night Live really is,” as he suggested in an April tweet. What the SpaceX founder’s monologue did include was, predictably, ample mentions of Dogecoin... and a sweet surprise appearance by his mom, Maye Musk, for Mother’s Day.

The pair reminisced about how Musk made a space-themed video game when he was 12 years old and shared a hug before, naturally, Dogecoin came up (as it was always going to). “I’m excited for my Mother’s Day gift. I just hope it’s not Dogecoin,” Maye said.

References to Musk’s cryptocurrency recurred throughout the evening and no, those of us in the dark are not any closer to understanding it. During a Weekend Update segment, Musk appeared as a financial expert called Lloyd Ostertag (aka “the Dogefather”) to clear up the confusion. “It was created in 2013, and has a circulating supply of 117 billion coins — of which, 113 billion have already been mined,” he said.

“Alright, cool. So what is Dogecoin?” Michael Che pressed on.

While Musk was singing the praises of Dogecoin on TV, a different story unfolded online. Many fans noted on Twitter that the cryptocurrency’s price was actually going down during SNL — according to CNBC, it dropped almost 30% at one point, but it was on its way back up before the episode ended.

Even if, like Che and Colin Jost, you still don’t understand Dogecoin — you’re not alone. Fortunately, Musk’s appearance on SNL prompted enough memes to almost make sense of it all.