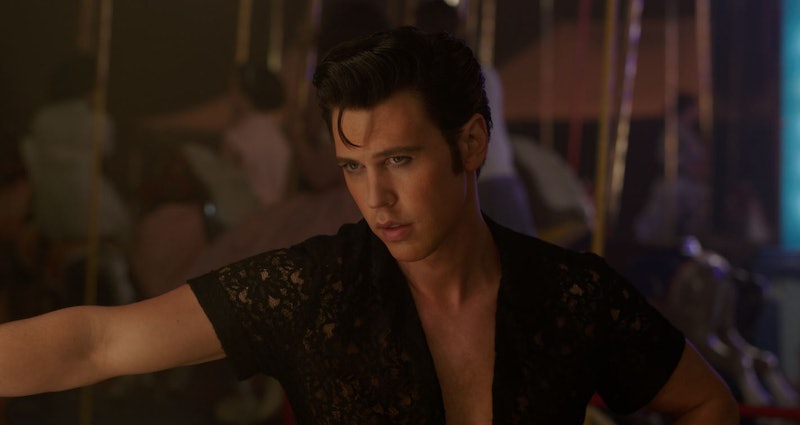 To sing or not to sing? It’s the age-old Hollywood question for actors trying to reinvent themselves or take on musical roles outside of their comfort zones. Baz Luhrmann’s Elvis is the latest movie to take the question head on. Led by Austin Butler, the film explores the life and career of Elvis Presley, and required Butler to provide vocals for the younger Elvis (though Elvis’ real voice is used for the older version portrayed in the film). Butler, who has been a musician from a young age, told Entertainment Weekly that he created his own archive of Elvis’ voice to nail down the performer’s voice. “Music has always been a part of my life but always a very private thing," he said. “I knew that the singing aspect of [the role] was going to be something I really wanted to give everything I had to.”

Butler is far from the first actor to work with voice and dialect coaches and sing for a role. Here are 11 other films where actors got behind the microphone and belted out a tune or two.

Most of the stars in The Greatest Showman weren’t strangers to singing: Zac Efron is perhaps still best known for starring in the Disney Channel smash hit High School Musical trilogy; Zendaya is an accomplished musician in addition to her acting career; and Hugh Jackman famously dueted with Neil Patrick Harris when they co-hosted the 2011 Tony Awards. All three stars lent their voice to the production in addition to learning extensive choreography, and Jackman told Variety (via Express) at the time that that working on The Greatest Showman was some of the most grueling work he’s ever done. “I sing notes that I've never sung...I have done a lot of dancing, but this was the most challenging,” he said.

Taran Egerton fully committed to embodying Elton John in Rocketman — and part of the deal with the real Elton was that Egerton sing for the film. On his website, Elton said, “It was so important that the music I composed and recorded had to be sung by Taron. I wanted his interpretation of me, through Bernie [Taupin]’s lyrics and my music—not just acting.”

Egerton also felt it important to add his own take on the music. Speaking to Entertainment Weekly, he explained how the film doesn’t work without his own recordings: “Rocketman works and thrives when it feels like it’s existing in a realm that isn’t quite our world. It’s not quite our Elton. It’s not quite the music that you exactly know. It’s re-imagined. It’s not intended to be a carbon copy performance of who Elton is.”

Seeing as the film won an Oscar for Best Original Song and was nominated for a slew of other awards, it’s clear Elton and Egerton’s insistence was fruitful.

Renee Zellweger’s Oscar win for her portrayal of Judy Garland was completely earned. The actress hired the self-proclaimed “voice-builder” Gary Catona (whose client roster includes Whitney Houston, Andrea Bocelli, and Garland’s own daughter Liza Minnelli to name a few) to help Zellweger strengthen the muscles around her vocal chords. In an interview with Variety he said, “her trick was not impersonating Judy Garland, but bringing something of her own alchemy to it, which I feel she succeeded in doing, while remaining true to the character and making it come alive.”

The Damien Chazelle brainchild about struggling artists in LA was an instant classic, and not only because of the notorious Oscar Best Picture flub. The film features a winning partnership in Ryan Gosling and Emma Stone, both of whom sing all of their own songs as the crooning jazz musician and the aspiring actress, respectively. While Stone did a lot of theater and musicals while growing up, she didn’t consider herself a great singer or dancer when she took the part. “Damien was very adamant that even though he wanted people that had a bit of musical ability—that were able to dance and sing—it didn’t need to be technically perfect. I didn’t need to be Sutton Foster or Idina Menzel, who are my heroes, but who I’ll never be able to stack up next to,” she told TIME.

It’s no surprise that Lady Gaga sang all of her parts in the 2018 A Star Is Born remake, in addition to co-writing a handful of the film’s original songs. But her co-star Bradley Cooper also lent his voice to the soundtrack and played a role in composing the songs for his directorial debut. Not a singer by nature, Cooper reportedly took six months of guitar and piano lessons to prepare for the role. In an interview with Entertainment Weekly, Cooper also revealed that he worked with a dialect coach to help him lower his speaking voice an octave to embody fictional rock star Jackson Maine in the movie.

The role that catapulted Reese Witherspoon into being seen as more than just a romantic comedy star required her to get out of her comfort zone. In Walk The Line, which tells the life story of Johnny Cash, Witherspoon originally didn’t think she’d have to sing in the role of June Carter Cash. “I’ve never sung professionally and I have terrible stage fright,” she told Conan O’Brien on his late night talk show. She underwent six months of voice lessons before recording the album, and essentially learned how to sing from scratch. The hard work and transformation paid off: Witherspoon ended up winning the Best Actress Oscar for the role in 2006.

Relative newcomer in 2013, Oscar Isaac starred in the Coen Brothers musician-centered film Inside Llewyn Davis. During press for the movie, Isaac told Entertainment Tonight that everything for the film was recorded live and there was no lip synching involved in the production. Luckily, Isaac felt comfortable behind the microphone: he’s been singing for a long time, even attending Julliard and the University of Miami School of Music. The soundtrack is full of folksy hits and it’s even better knowing that Isaac is actually the one singing.

One of Zac Efron’s first post-High School Musical roles was in the filmed musical Hairspray based on the 2002 Broadway show of the same name. In addition to Efron, the film’s ensemble cast includes John Travolta, Amanda Bynes, James Marsden, Michelle Pfeiffer, Queen Latifah, Brittany Snow and more — all of whom lent their own vocals to the film.

Like many musical films, Les Miserables is a filmed adaptation of a stage musical. For better or worse, all of the actors in the film sang their own parts: Anne Hathaway won a deserved Oscar, likely driven by her emotional performance of “I Dreamed A Dream,” while Russell Crowe has been widely panned for his lack of singing chops.

Moulin Rouge, another Baz Luhrmann musical, came out over 20 years ago and was released to wide acclaim. Starring Nicole Kidman and Ewan McGregor, the actors sang their own parts — even though Kidman didn’t feel like her singing was up to her own standards. “I can't do with my voice what I can do when I act and that's very frustrating. With performance, there's the possibility I may not get there. But at least I know I can try to reach it. With voice, I just can't. I wish I could sing what I feel,” she told the Sydney Morning Herald despite receiving critical acclaim for her performance. Meanwhile McGregor has openly talked about how much he loves singing, which was certainly a factor in the film’s success.

For all of its acclaim, the original 1961 West Side Story used dubs for the singing despite being a musical. In Steven Spielberg’s 2021 remake, the stars are actually singing. The film is filled with many actors with a music theater background, including Ansel Elgort who told Playbill that he cried when he learnt he had been cast as Tony: “Musical theatre is my first love—I saw Oklahoma when I was 4 and decided ‘that’s me, the guy with the lasso!’” Elgort stars alongside other Broadway stars like Rachel Zegler, Ariana DeBose, and legend Rita Moreno.

More like this
Christina Perri Had No Idea Her 'Twilight' Song Is On YouTube's Top 100 Chart
By Radhika Menon
Madonna’s Reason For Directing Her Own Biopic Is So Madonna
By Maxine Harrison
Taylor Swift Calls Dwayne Johnson "The Man" After Revealing New "Taylor's Version" Song
By Jake Viswanath
Lady Gaga Will Star In 'Joker: Folie À Deux' With Joaquin Phoenix
By Jake Viswanath
Get Even More From Bustle — Sign Up For The Newsletter