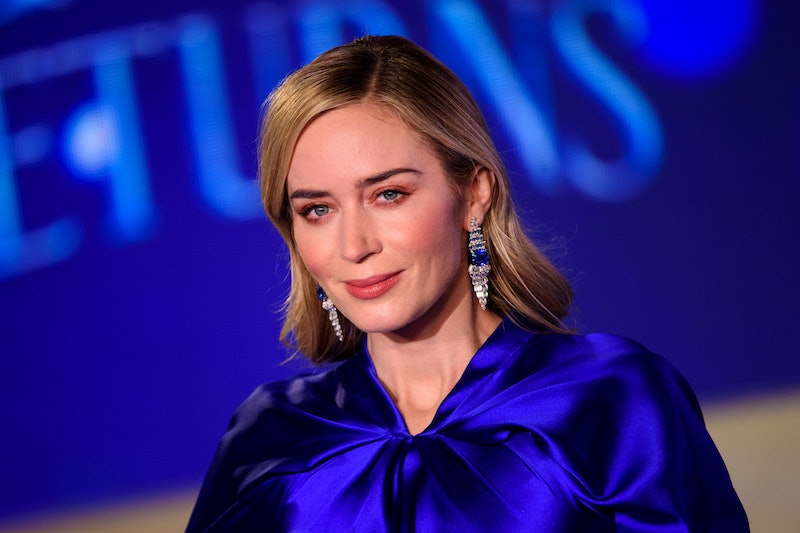 Like you, we live for an awkward first kiss story. However, Emily Blunt’s first smooch wasn’t just awkward, but an absolute “horror show.” On May 26, The Mary Poppins Returns actor appeared on Jimmy Kimmel Live and detailed the entire experience on live TV. And yes, the embarrassing story will make you cringe from start to finish.

In the interview, Blunt revealed that she had her first kiss during a game of Spin the Bottle at her 13th birthday party. And when someone in the audience let out an audible “aww,” Blunt was quick to correct the person. “It was awful. His name was Ashley Clark and it was the ’90s,” she said, explaining that he had curtain bangs, a popular trend for boys at the time. “It was quite an attractive thing so if you were talking about boys, you’d be like, ‘Have you seen his curtains?’”

“Ashley Clark had great curtains,” the 38-year-old actor continued. “They were blond and he was very tall and very handsome.” Elsewhere in the interview, Blunt set the scene by explaining that roughly 18 kids gathered around her dining room table to play the game. She also put a makeshift sign on the door demanding her mother to keep out. “I spun the bottle, it landed on Ashley, I thought, ‘Oh my God, this is it,’” she said.

Unfortunately, Blunt’s first kiss wasn’t just a peck, but a full-on French kiss. “Now, I had heard about the concept of French kissing but I thought, ‘Well, that sounds weird. Why would that be pleasurable or nice? And it wasn’t. It was not,” she confirmed. “I was just, like, horrified by the whole thing. And I just remember surreptitiously wiping my mouth afterward. It was just horrible.”

Obviously, Blunt didn’t keep in touch with Ashley after he — as Kimmel said — slipped her the tongue. But the actor said that the word “slipped” is a major understatement. “Not slipped,” she corrected. “That sounds kind of delicate!” The actor went on to say that she has no idea what Ashley is up to these days, but things definitely worked out for the best. In 2010, Blunt went on to marry actor John Krasinski, who wrote and directed A Quiet Place 2. Blunt stars in the film, which is scheduled for release on May 28, after being delayed because of the ongoing COVID-19 pandemic.

“It was surreal,” Blunt said of the world shutting down due to coronavirus, adding that the movie feels even more relevant now than it did pre-pandemic. “In the first movie their home gets decimated, destroyed, all of it, so the family now has to venture out. And it’s this big theme of needing your neighbor to extend their hand to you and yet we’ve been living in this world of nobody wanting to do that.” She’s right. Extending hands to strangers and spreading more germs is absolutely off-limits, and so is French kissing. Someone please tell Ashley Clark.