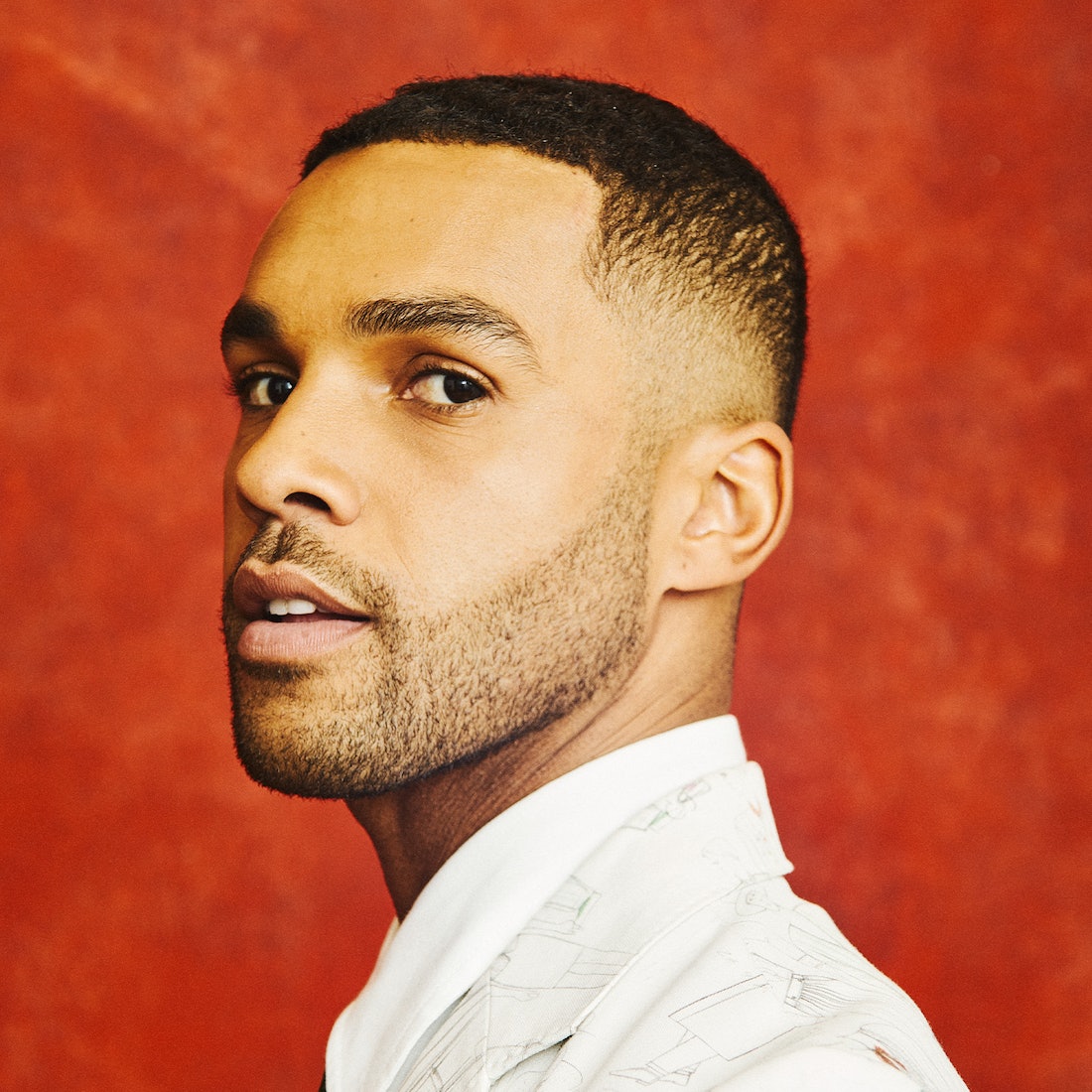 No matter the surroundings, Lucien Laviscount manages to charm anyone in his periphery. On this rainy Friday afternoon, you wouldn’t know from his chipper demeanor that he’s wrapping up a few whirlwind weeks of glitzy premieres and globe-trotting promotional trips ahead of Emily in Paris’ third season. As he walks through the lobby of a Flatiron hotel, dressed in a red puffer jacket and the sort of zany patterned pants that only a debonair actor can pull off, he leaps up the stairs to help an older man with his suitcase, then jumps back down to hold the door open for a group of hotel guests. Meanwhile, he’s peppering me with questions about my holiday plans and favorite New York spots, and he tells me excitedly about the holiday shopping he plans to do that evening before he returns to Antigua, the Caribbean island he currently calls home.

And if you need further proof of his ability to delight and win over strangers, just look up his recent viral appearance on The Drew Barrymore Show. When Barrymore asked him who his “childhood fantasy” was, he gazed into her eyes and flashed a megawatt smile. “I’m living the dream right now,” he said, throwing the host into a fit of giggles.

It makes sense that Laviscount would be in high spirits. After the 30-year-old Brit was cast last year for the second season of Emily in Paris — in which he played a love interest for Emily herself — his career took off with the specific cadence of a newly crowned Netflix star. He now has more than a million followers on Instagram, nabbed a role in an Amazon Original Christmas movie, and makes regular splashes in the fashion world by showing up to red carpets in hot pink and purple suits. (His style icon? “Lenny Kravitz,” he says. “I feel like it’s just the daringness of [his outfits], the ‘eff-you’ to society, when it comes down to swag and that whole image he puts out.”) Now, with the third season of Emily in Paris out, Laviscount is poised to get even more attention as his character, Alfie, steps further into a love triangle with Lily Collins’ Emily and Lucas Bravo’s chef Gabriel as a series regular. “I’ll never forget the first few days on set,” Laviscount says, recalling his very first table read, when Collins gave him a hug and some words of encouragement. “And then everything from then on, honestly, my feet haven’t hit the ground.”

When people approach him on the street, “Usually I get, ‘I’m Team Gabriel, but can I have a picture because I’ve got a friend somewhere that likes you?’”

Laviscount wasn’t always sure Alfie would make it to the third season. After the cotton candy confection of a show became an immediate hit for Netflix in October 2020, the Emily overlords embarked on a search for a romantic foil who could shake things up in Season 2. Laviscount — who got his start on the U.K. series Grange Hill before appearing on shows ranging from British soap Coronation Street to the CW Riverdale spinoff Katy Keene — was in New York when he got a phone call from his manager, who said “Lucien, stop what you’re doing. [Show creator] Darren Star wants to see you tape for Emily in Paris.” He received thirteen pages of dialogue and recorded it immediately with the help of a friend he summoned miderrand. “She was getting her nails done. She came back from the nail salon with half her nails done, the other half hanging on,” he recalls. “And we knocked out the tape within an hour.” Another hour after submitting his tape, he got a call that Star and Collins wanted to Zoom with him the next day. And just 45 minutes into that Zoom, Star told him he had the part. “[We] were instantly won over by his charm, his humor,” Star says, “and felt confident he would bring a fresh energy to the show.”

Though Star says Alfie “was always envisioned to have a longer arc on the series,” Laviscount remembers initially being cast for only three episodes. Still, he connected with the character immediately. “[Alfie] was this cynical Brit, a banker that comes to Paris and hates it. And I was like, ‘I can do that,’” says Laviscount, who grew up in Lancashire, England. Whereas many of the characters on the show spend the bulk of their time bemoaning affairs of the heart over wine and pastries, Alfie tends to cut to the chase. “He’s got his heart on his sleeve, and he’s really honest about his feelings, I think,” Laviscount says. “And that’s quite rare on this show. He’s good at speaking his truth.”

It helps, of course, that Laviscount and Collins have excellent on-screen chemistry. “Lucien has such an infectious and positive attitude on set that makes working with him so fun,” she says. Star adds that Laviscount’s performance brings out a different layer of Emily’s personality, noting “I love the way he teases her and brings out a fun playful of side of Emily — and Lily. Alfie and Lucien both share a devilish side and a sense of adventure.”

Laviscount says he tries his best not to dip into online discourse around the show, instead letting his mom surface the most notable comments for him to read. And he has a good sense of humor about viewers who may be rooting for Emily to end up with the other guy. When people approach him on the street, “Usually I get, ‘I’m Team Gabriel, but can I have a picture because I’ve got a friend somewhere that likes you?’” he says. “Honestly, more than anything, it does feel like a superpower to be able to make someone’s day just by saying hello or just having a little picture here and there.”

The attention has also altered the way he approaches his dating life and meeting people generally. “I love to go out and dance and certain things like that, but now I guess everything’s just become a little bit more local — i.e., we’re at friends’ places a lot more,” he says. “Or if I’m in London, we’ll be at the bar. [There’s] a little bit more structure to nights out, I guess.”

“But yeah,” he concludes, “I feel like, with anything, I see it as a blessing.” Even with a full plate — on top of acting roles, he’s also writing scripts of his own — Laviscount projects just-happy-to-be-here energy: “I just want to gravitate to what make sense in the moment and give it 100% and hopefully kill it and keep on going,” he says. “If I have a long career doing this, great. If I don’t, I’ve had a great run.”

He still has roots in London and recently opened a bar in the city called the Wealthy Beggar with restaurateur Zac Lichman. (“The name came from the idea of ‘true wealth is in your heart.’ And we are going to beg, borrow, and steal to get whatever we want in this life.”) But his heart is clearly in Antigua, where his parents now live (his father is of Antiguan descent) and where he spent most of 2020. Last year, Netflix couldn’t even hold a premiere for the second season of Emily in Paris because of the pandemic. Now, Laviscount not only got to attend his first premieres for the show, he also orchestrated one himself after asking Netflix to host an event in Antigua, which took place on Dec. 20.

“The first reaction [from Netflix] was like, ‘OK...’,” he says. “And then I was like, ‘You have no idea what it’d mean, not just for me, but for kids there and the people on the island and all the West Indies, who don’t get the opportunities to be in New York or Paris for a premiere but also love the show. [It goes to] show you can do it no matter where you come from.” He pauses, and looks up at me, beaming, “Yeah, anything’s possible.”