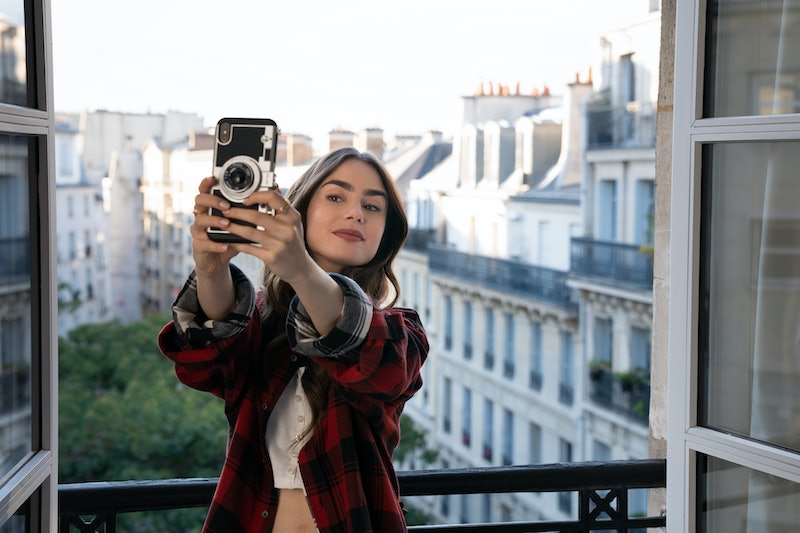 Whether you're on team love to hate it, or hate to love it, the feelings around Netflix's Emily in Paris are polarizing. Currently the second-most popular show on Netflix, the light Lily Collins com-dram, from Sex and the City creator Darren Starr, is only picking up momentum. A week after the show's premiere, Twitter is still ablaze with reactions. But why is it evoking such obsessive hate-watching? Mental health experts say that the psychological reason you can't look away from Emily In Paris has to do with our current ability to process stress, and a desire for or aversion to escapism. In a pandemic, the spectacle of a privileged young woman galavanting around the City of Love, with unbridled optimism in place of a mask, is both infuriatingly unrealistic and just what the doctor ordered.

"After watching the first episode, I spent hours bashing this show in my group chat. Then I got bored and ended up hate-watching the rest of it in one day," Monica, 30, tells Bustle. "I am ashamed to admit that I'm hoping it gets picked up for another season."

Amy, 51, says she loved it flaws and all. "Just the pure escapism of it, no mention of the pandemic or masks or social distancing, the wacky clothes, and of course Paris," she says. "Was it fluff and basic? Yes. Did I love every moment of it? Also yes."

According to clinical therapist Caroline Given, L.C.S.W., our reaction to the show is more indicative of what we are going through, rather than what the show presents. "The polarizing views on Emily in Paris reveal a lot about how people respond to crisis and chaos," she says. "It’s undeniable that in America we are experiencing a time of upheaval and while there are a variety of ways to cope with that, I believe the two major cognitive inclinations are towards either escapism or reality confrontation."

The show asks viewers to suspend their disbelief that a junior marketing agency employee could move to Paris to represent her company while speaking zero French, says neuropsychologist Dr. Sanam Hafeez, Psy.D., and instead indulge the fantasy. But the idea of suspending reality is as repulsive to some as it is alluring to others.

"The mere fact that the main character is mask-less allows some viewers to pretend that they are back in a world where they are as well," Hafeez says. "Nightclub scenes show people are standing and sitting close together and that life is fun and frivolous — as some people watch this, they too may wish they could be free, traveling in a foreign country, and unconcerned about COVID."

For people who are unable to separate from their feelings about work, health, and the political climate right now, Hafeez says that it can feel tone-deaf. "With a critical election just a few weeks away, most of us just cannot embrace what Emily is feeling in this series. It has been so many months since we have been mired in this pandemic, financial crisis, political and racial upheaval, that many forget what this unbridled enthusiasm even feels like," she says. Hafeez explains that people are too stressed to unwind for this kind of content right now.

Given says that for some, escapism is essentially butting heads with a sense of moral duty. For others, a desire to be fully immersed in fantasy is a way is a welcome way to check out from real life, which is particularly uncertain right now.

"The people who are prone to indulging in a fantasy mindset are also likely to view that fantasy, no matter how far fetched, as aspirational or inspiring. Whereas a reality-confronter might view the same fantasy as delusional or even irresponsible to engage with because it seems so detached from a harsher reality," Given says.

Given also points to the fact that the pandemic has inspired a philosophical way of thinking for many, that makes viewers more likely to judge and confront things. "The essential truth of information is constantly being questioned and there is a universal longing for authenticity and sincerity right now," she says. "The trouble is that I don’t think there is a consensus on what authenticity and sincerity really is."

So whether you're feeling profoundly agitated or amused by Emily's Paris, you might be able to glean some insight into what your reaction says about how you're feeling about life in general right now. If you're on your 10th hate Tweet, you might not be in a headspace for escapism, and that's OK. There's no reason to force down the baguettes, Boomerangs, or berets right now.

More like this
19 Latinx Therapists & Mental Health Experts To Follow On Instagram
By Kaitlyn Wylde, Naydeline Mejia and Lexi Inks
The ‘Emily In Paris’ Season 3 Release Date Is Here, Plus The First Footage
By Bustle Staff
Here's When 'The Crown' Season 5 Will Premiere — And What To Expect
By Bustle Editors
'Heartstopper' S2 Just Welcomed Four Brand New Cast Members
By Nola Ojomu and Sam Ramsden
Get Even More From Bustle — Sign Up For The Newsletter