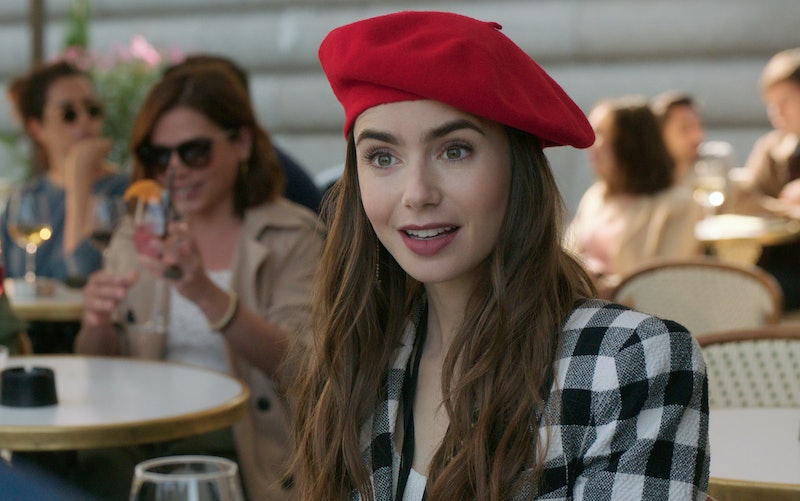 Netflix's so-bad-it's-bad new half-hour dramedy, Emily in Paris, has officially been renewed for Season 2, and it has a messy cliffhanger to resolve when it returns. In the final moments of the first season, Emily (Lily Collins) plans a date with her new beau Mathieu (Charles Martins) only to learn her secret crush Gabriel (Lucas Bravo) isn't leaving Paris after all. This puts her in a sticky situation. She's friends with Gabriel's girlfriend Camille, who he only broke up with because he was moving. And she just slept with Gabriel the night before. Seconds later, Emily gets an ominous text from Camille: "I just heard from Gabriel. He's staying in Paris. Can we talk??"

This could obviously lead to a precarious second season, in which Emily must navigate an even more complicated love triangle. Will Gabriel and Camille get back together? Will he choose to be with Emily? Will Camille find out about their relationship? And what will become of Mathieu??

It may be a while until fans find out. Emily In Paris' first season was filmed in fall 2019, which means it took about a year to make it to screen. But the show won't be able to film a potential second season anytime soon. Though film and TV production is starting to resume in America, Emily in Paris is shot in France, where there are still travel restrictions in place. And creator Darren Star told Entertainment Weekly that the location is pretty much non-negotiable. "Just the way I would never shoot Sex and the City in Toronto. The city is a character. It's called Emily in Paris. You need Emily and you need Paris," he said.

Depending on when the world opens back up, a second season of Emily in Paris could be ready by late 2021, but 2022 seems more likely. Fans will just have to wait with bated breath until then.

More like this
The ‘Emily In Paris’ Season 3 Release Date Is Here, Plus The First Footage
By Bustle Staff
The ‘You’ Season 4 First Look Shows Joe’s New Identity And Potential Victims
By Bustle Editors
Here's When 'The Crown' Season 5 Will Premiere — And What To Expect
By Bustle Editors
'Fate: The Winx Saga’s Cliffhanger All But Begs For A Season 3 Renewal
By Brad Witter
Get Even More From Bustle — Sign Up For The Newsletter