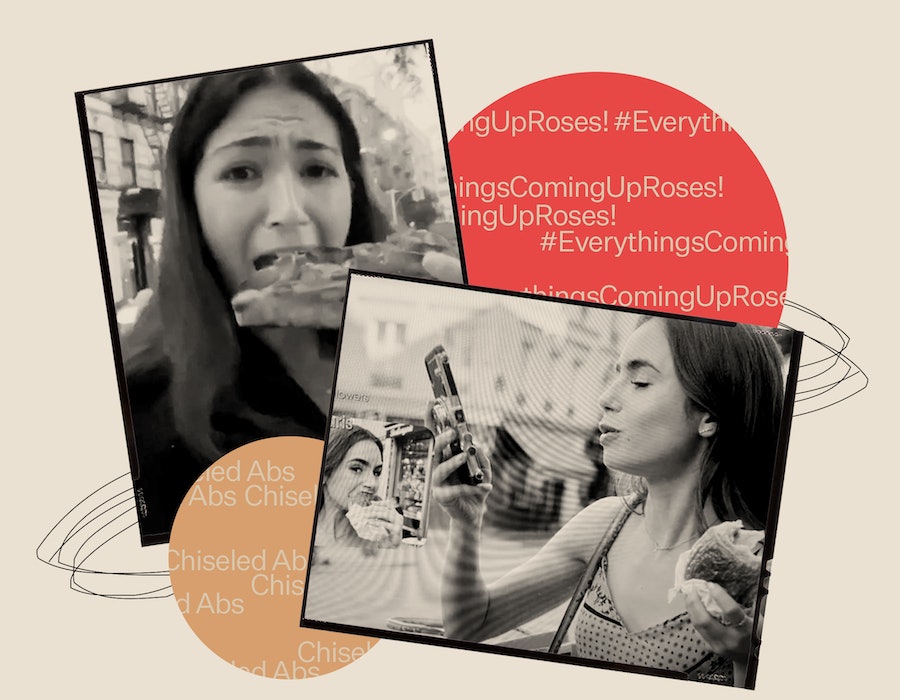 Last week, swayed by the hoards of hilariously negative reviews, I decided to sit down and inhale all of Netflix's Emily In Paris in one sitting. I did so with the expectation that it would be so-bad-it's-good, like 90% of Glee. And for the most part, I was right. Despite being denounced by the entire country of France (and one Chicago pizza joint), I found a few key details about what it's like to move to Paris as an outsider to be surprisingly accurate.

You see I, like Emily, once upended my life and moved to Paris. The year was 2015, and I lived in the Latin Quarter for six months as part of an exchange program. My host family's apartment was perched on the top floor of a centuries-old walk-up with motion sensor-activated lights, where I experienced the confusion of ground floors, outward-opening doors, and unannounced water shortages firsthand. And while none of my neighbors fell in love with me (to my knowledge), my host brother was, in fact, a chef. Could Emily be... based on me? Quelle horreur!

‌Beyond those details, the show felt decidedly camp. Emily flaunts about Paris mispronouncing bonjour and pouting about why the city refuses to embrace her the way she did croissants. The outfits are vile (if I never see another hat again, I'll die happy), the relationships are cliché (an older female boss who feels threatened by Lily Collins' youthful joie de vivre and perfect brows? Groundbreaking!), and Emily's lack of awareness about her privilege as a white, thin, upper class (judging by her endless supply of Chanel) woman is so outrageous, it borders on satire.

But the real pièce de résistance is Emily's mishandling of social media: Between the close-up selfies and corny hashtags, social media editors everywhere are ready to put in their two weeks. Against all odds, every one of Emily's posts somehow goes viral, lands her brand sponsorship deals, and builds a cult following. In a few short episodes, her follower count grows from 84 to 25,000.

Which got me thinking: Either Darren Starr knows something I don't know, or the intern he's hired to run his socials has never used Instagram a day in their life. So, I decided to put his methodology to the test. For one week, I Instagrammed like Emily and waited for fame to follow (reader: it did not).

I commend Emily for taking this selfie and uploading it to Instagram without a second thought. First of all, windows totally backlight faces, which means the lighting is whack. Secondly, "my view" isn't of, say, the Eiffel tower, but windows of the walk-ups across the street from where I live in New York City. And third, my arm hurt after taking a million of these in order to get one shot where I didn't look like I was holding in a fart. The actual photo was somewhat well received, with two strange men choosing to comment — one step closer to finding my Gabriel!

In order to recreate Emily's iconic first-taste-of-croissant Boomerang, I hightailed it to Prince St. to get a bite of a true New York delicacy: pizza. Unfortunately, I am allergic to gluten and had to give this slice to my partner shortly after uploading. Also unfortunate: In the one minute I took off my mask to take this video, a pedestrian screamed, "Wear a f*cking mask!" I love New Yorkers. This Story wasn't as well received as my first 'gram, as no one has seen a Boomerang since the year 2016. My friends were confused and concerned.

I woke up to an annoying five-follower loss, instead of a 100+ follower gain. But nonetheless, we persist. For this post, I took a cue from Emily's trip to the Luxembourg Gardens and hit Elizabeth Street Garden, a nearby sculpture park. Unfortunately, the only statue I could find with chiseled abs was some sort of bird. The second I uploaded, I knew it was a mistake — the picture is undeniably creepy. Ultimately, it resulted in my least liked Instagram since the early 2010s. My mother immediately commented, "Are you OK?"

Hey! I gained two followers back! Meanwhile, Emily has gained over 1,000! Cool, cool, cool. Not like this Instagram story was humiliating! In order to recreate Emily's post, I found an impossibly chic older man (look at his sneakers...) and his adorable dog. I changed up the caption for my non-French speakers, but still maintained the poop pun.

Caption: Paris is for cheese lovers

I woke up to three more followers and thought, "Surely this isn't working?" And alas, it wasn't. I had been tagged in a zine I'd contributed to a few months prior. Anyway, to recreate this panoramic video, I hit my equivalent of a local farmers' market: my neighborhood bodega. My caption is also a play on words — adapted from a classic New York saying — albeit not that funny.

Caption: A little hello does NOT go a long way!

Inspired by Emily's subtle jump to 5,000+ followers, I asked my local bodega man (he requested that I keep him anonymous, you know what celebrity can do to people) if he'd like to take a Boomerang with me. He said absolutely not. I suddenly felt very uncomfortable and wound up buying a carton of milk that I didn't need before quickly leaving.

While I have gained one net follower overall, Emily has somehow caught up with me over the course of the week. Suspicious! Anyway, it was raining today so I was unable to go outside and capture any real New Yorkers working out. Luckily, I had this beautiful picture of a stranger running around the reservoir in Central Park at sunset saved to my camera roll. As for the punny caption, running away from our problems felt fitting; God knows we have enough of them this year.

I'm up five followers, but Emily and her hashtags have also somehow surpassed me in followers. What — and I cannot emphasize this enough — the f*ck? I'll admit this post was a bit of a cop-out: It was raining two weeks out from the election in the middle of a pandemic, so I was understandably not in the mood to stop and smell the roses. I also looked atrocious, so I decided to forgo a selfie featuring my face and instead capture my roses in my new Baggu reusable shopping tote. And you know what? They look much cuter that way. If not for the hashtagged caption, this is something I might actually post IRL.

Caption: With a little help from mon amie

Caption: With a little help from my friend

This was a relatively easy one to copy. I just grabbed my very own Camille — my ultra chic friend Simone — and sat at an outdoor café for half-priced bottles of wine (only on Thursdays). Posting this felt somewhat nostalgic, like a drunk 'gram you wake up and regret the next morning. There was virtually no response to it. And while I have yet to go viral à la Emily, my followers have been pretty steadily rising.

Caption: Durée is smudge proof, even when you’re berry hungry.

Caption: Hourglass is smudge proof, even when you're berry hungry.

I filmed this free promo for Hourglass Cosmetics, and for some reason, they still haven't reached out to me about becoming a brand ambassador. I'm not sure why... maybe because replacing the word "very" with "berry" isn't even a tiny bit clever? Or perhaps it's because my smudge-proof lipstick did, in fact, smudge, leaving blueberry stuck in my teeth? Either way, looks like I'm nowhere near ready to quit my day job and become an influencer.

Since I don't own any tacky keychains, I decided to rock the only chain I have: My fabulous mask chain made by my dear friend Aidan. Unlike Emily, I actually believe this chain has brought me plenty of luck, as it continues to protect me from coronavirus. But in keeping with Emily's tradition, I still polled the public: ringarde or not? Surprisingly, the consensus was somewhat inconclusive.

I topped off the week with a photo of my partner and I at a local pumpkin patch doing fall things. I copied Emily's caption punniness to a T, though it appears to have led her wayward: She ends our "week together" down several hundred followers. Yikes!

All in all, this experiment required a lot of extra work, but resulted in very little benefit. Although I did end the week with a few dozen more followers, I didn't manage to go viral with the same zsa zsa zsu as Emily — perhaps because I am a jaded Middle Eastern New Yorker who lacks Emily's infantile naïveté and stunning lack of awareness. Another seven days went by, and I remained an irrelevant writer, overpaying for rent and drinking burnt coffee while scrolling through Twitter. TL;DR: Nobody cared about my week of Instagram chaos because they were too busy worrying about the world imploding.

But therein lies the appeal of Emily In Paris: For a brief moment, I was more focused on my Instagram aesthetic than my CNN news alerts, which acted as a sort of reprieve from my burnout. In other words, the experiment had the same impact on me that watching the show did on viewers — it's a form of complete and utter escapism. Is admitting that a little vapid? Yes. Is it effective? Also yes. Will I be archiving all of my posts? You betcha.

More like this
Lib & Will’s Romance In 'The Wonder' Is Very Different From The Book
By Sam Ramsden
Kate Winslet To Star In Russell T Davies' 'Dark Season' Revival
By Sam Ramsden
David Tennant’s Transformation In ITV’s 'Litvinenko' Is Astonishing
By Sophie McEvoy
How Is The British Royal Family Related To The Romanovs?
By Karen Fratti
Get Even More From Bustle — Sign Up For The Newsletter