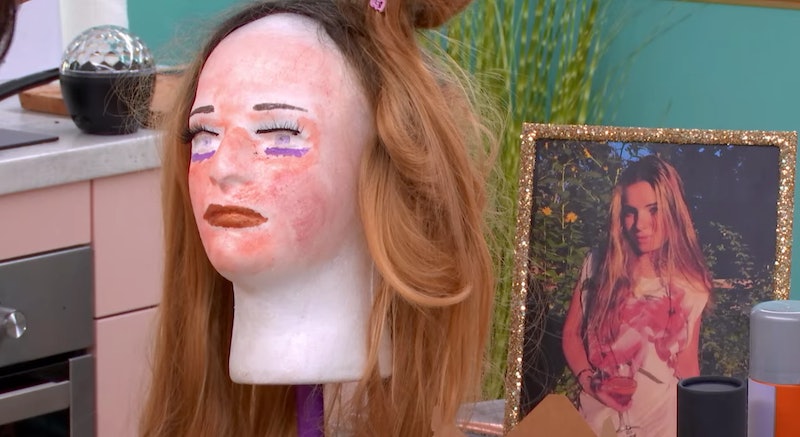 On Netflix’s The Circle, catfishing is an expected part of the game. It’s worked decently well for some contestants: in Season 1, Seaburn came in fifth place by masquerading as his girlfriend, Rebecca. Season 2 also has some skilled catfishers, like Deleesa as her husband “Trevor” and Lee as young student “River.” But there’s one player who spectacularly failed to keep his identity a secret: Jack.

Though the “cutthroat” college student thought he was getting away with pretending to be a 21-year-old sweetheart named “Emily,” any convincing he’d done was immediately foiled by the “Glammequin Challenge” in Episode 7. Appearing on The Circle platform, Queer Eye’s Johnathan Van Ness explained to players that they had to dress up a styrofoam mannequin head as themselves, using a box of makeup, wigs, and glitter. “Be bold, be extra, go wild with style,” he advised. He then gave them 30 minutes to decorate the head.

“But I’m a guy who doesn’t know how to do makeup, that’s posing as a woman who should,” Jack groaned to the camera. “So I’m f*cked, Jonathan!”

While the rest of the players immediately went in with liquid foundation, Jack started with either powdered foundation or straight-up pink blush — it was unclear, but it looked very bad. After he finished his splotchy strawberry-faced application, he gave the mannequin a smudged purple under eye liner, a dead-eyed stare, and an uneven pair of lips and eyebrows. He topped it all off with shaggy, unstyled hair and a pair of sunglasses.

“Emily, this was a struggle. I sense a lack of time, maybe a sense of anxiety emanating from your manny,” Van Ness said while judging the mannequins, as Jack groaned and curled up on the floor. “It turned out a little salmon ... there’s an age old saying that your eyebrows should look like sisters, not twins. These eyebrows are like third cousins.”

Though it made for hilarious entertainment, the bad makeup job immediately put the other players on alert about Emily — the person who, up until that point, was coasting along in several alliances with key players like Trevor and Chloe. “Oh my god, Emily. Now I’ve got doubts,” Chloe said when Jack’s mannequin popped up on screen accompanied by sad piano music.

“That don’t look like a 21-year-old girl did it,” said Mitchell, who managed to put together a decent mannequin despite playing as himself.

“If every single player is not questioning Emily’s identity after this, they don’t deserve to win $100,000” Courtney added.

Deleesa’s “Trevor” ended up winning the competition (all while raising a few eyebrows herself for her perfect makeup application). But it was Jack who was devastated the most by the challenge. “All of the girls and like any guy with half a brain is going to be like, ‘a girl did not do that makeup,’” he said. “I’m actually kind of upset ... it’s just ridiculous that this is the sh*t that’s getting me upset, but it’s like all my work is just down the drain,” he said as he started to cry.

Jack ultimately couldn’t overcome the other players’ suspicions, and he was eliminated at the end of Episode 8 alongside Lance Bass’ assistant Lisa. Though a surprise twist at the end of Episode 8 revealed that he and Lisa can keep playing together as an old man named “John,” “Emily” is officially done with the game. As Jack himself said, “If you’re going to catfish as a girl, make sure your makeup skills are on point!”