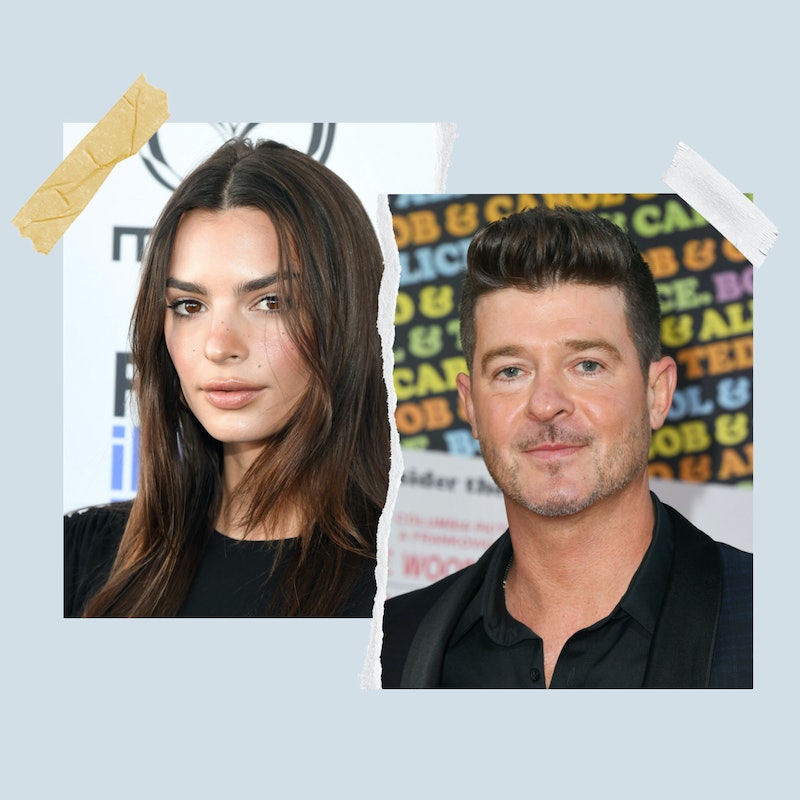 Emily Ratajkowski is opening up about being groped by Robin Thicke on the set of “Blurred Lines.” On Sunday, Oct. 3, the Sunday Times shared excerpts from the model’s upcoming book, which alleges that she was sexually assaulted by the singer while filming the music video in 2013. The video, which stars Thicke, Pharrell Williams, and T.I., features Ratajkowski and two other semi-nude models. It has long been criticized for promoting rape culture.

“Suddenly, out of nowhere, I felt the coolness and foreignness of a stranger’s hands cupping my bare breasts from behind,” the model reportedly writes in My Body, out Nov. 9. “I instinctively moved away, looking back at Robin Thicke.” She also claims that Thicke’s eyes were hidden behind sunglasses and that he “smiled a goofy grin.” “My head turned to the darkness beyond the set,” she continues. “[The director, Diane Martel’s] voice cracked as she yelled out to me, ‘Are you OK?’”

Although Ratajkowski writes that she was “nothing more than the hired mannequin” and that the encounter made her feel “naked for the first time that day,” her first instinct was to “minimize” the situation and brush it off because Thicke was “a little drunk.” “I pushed my chin forward and shrugged, avoiding eye contact, feeling the heat of humiliation pump through my body,” she writes. “I didn’t react — not really, not like I should have.”

Martel confirmed the incident to the Times. “I remember the moment that he grabbed her breasts. One in each hand. He was standing behind her as they were both in profile,” she recalled. The director also told the U.K. paper that she didn’t think he would’ve groped the model “had he been sober.” “I screamed in my very aggressive Brooklyn voice, ‘What the f*ck are you doing, that’s it!! The shoot is over!!’” she said.

According to Martel, Thicke apologized but didn’t understand how the situation felt from Ratajkowski’s perspective. Regardless, the model wanted to continue filming, even though the director was willing to halt production. “We kept on and Emily was phenomenal,” Martel told the Times. “She’s really the star of the video. She’s fully mocking him and the male gaze with her beautiful shape and ferocious energy. She’s playful, not seductive. And quite hilarious.” Bustle has reached out to Thicke for comment and will update this story accordingly.

Although Thicke hasn’t addressed these particular allegations, he told the New York Post in February that fans won’t see him “making any videos like that ever again.” “I had lost perspective on my personal life and my music and what was appropriate,” he said. He also previously admitted to drug and alcohol abuse during the promotion of the album. “We had no negative intentions when we made the record, when we made the video,” Thicke told the paper. “It did open up a conversation that needed to be had. And it doesn’t matter what your intentions were when you wrote the song … people were being negatively affected by it.”

On Oct. 5, Ratajkowski opened up about why she hasn’t shared the story until now. “I was an unknown model and if I had spoken out or complained, I would not be where I am today; I would not be famous,” she told People, noting that she “[hopes] people are able to read the essay and understand the nuance behind these kinds of situations."

This article was originally published on Oct. 4, 2021