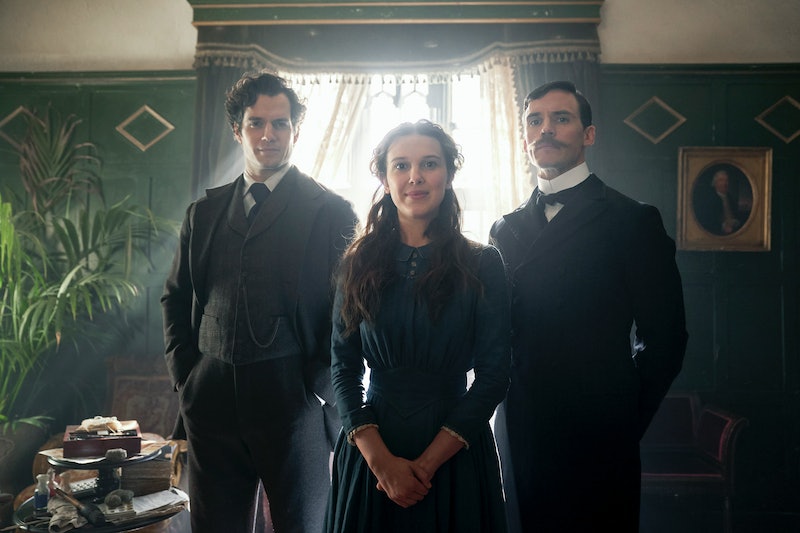 Fans of the first Enola Holmes film will be pleased to know that the sequel is one step closer to being released on Netflix. Starring Millie Bobby Brown (Stranger Things) as the inquisitive Enola, Henry Cavill (Justice League, The Witcher) as Sherlock Holmes, and Sam Claflin (Peaky Blinders, Hunger Games) as Mycroft Holmes, the first look at the upcoming sequel has finally been released for our viewing pleasure.

What’s the plot for Enola Holmes 2?

The last time we saw Holmes, she was busy saving Viscount Tewkesbury, whom she met whilst boarding a train running away from her brothers, from being murdered by an assassin. After which, they both travelled to London and parted ways. Or so we thought.

It’s been confirmed that Tewkesbury, played by Louis Partridge, will be returning for the sequel, which leaves much to be desired about his and Enola’s storyline, and maybe even a possible romance.

Enola Holmes is based on book in the wider franchise, The Enola Holmes Mysteries, and so it’s pretty likely that Enola Holmes 2 will follow some of the events of the second book of the franchise, The Case of the Left-Handed Lady. This book sees Enola investigate the disappearance of a young girl, whilst still trying to outrun her older brothers, Sherlock and Mycroft, who want to send her away to boarding school.

The film’s synopsis reads: "Now a detective-for-hire like her infamous brother, Enola Holmes takes on her first official case to find a missing girl, as the sparks of a dangerous conspiracy ignite a mystery that requires the help of friends – and Sherlock himself – to unravel."

Who will be starring in Enola Holmes 2?

David Thewlis (Harry Potter) and Sharon Duncan-Brewster (Dune) will also be joining the cast for the upcoming sequel in yet-to-be named roles.

When will Enola Holmes 2 be released?

No release date has been announced, but Netflix has included Enola Holmes 2 in their biggest films to look out for in 2022, so we can definitely expect to see it on our screens some time this year.

Is there an Enola Holmes 2 trailer?

Netflix hasn’t released the trailer for Enola Holmes 2 just yet, but we have been treated to a short teaser clip, where we see Brown and Cavill’s characters turn to the camera and talk directly to the audience.

"In here, mystery sparks extraordinary adventure," says Cavill, playing Sherlock, as he strolls down a Victorian alleyway with Enola. She adds: "The real mystery is why everyone is talking to them [the viewers]. I thought that was my thing?"

ENOLA HOLMES 2 Teaser Trailer
More like this
Everything To Know About The 'Daisy Jones & The Six' TV Series
By Maxine Harrison and Brad Witter
The Song At The End Of 'The Last Of Us' Ep 1 Has A Deeper Meaning
By Sophie McEvoy
This First Look At 'The Gold' Shows Jack Lowden In A Whole New Light
By El Hunt and Sam Ramsden
'Happy Valley' Recreated This Moment From S1 In Its Penultimate Episode
By Sophie McEvoy
Get The Very Best Of Bustle/UK
Sign up for Bustle UK's twice-weekly newsletter, featuring the latest must-watch TV, moving personal stories, and expert advice on the hottest viral buys.