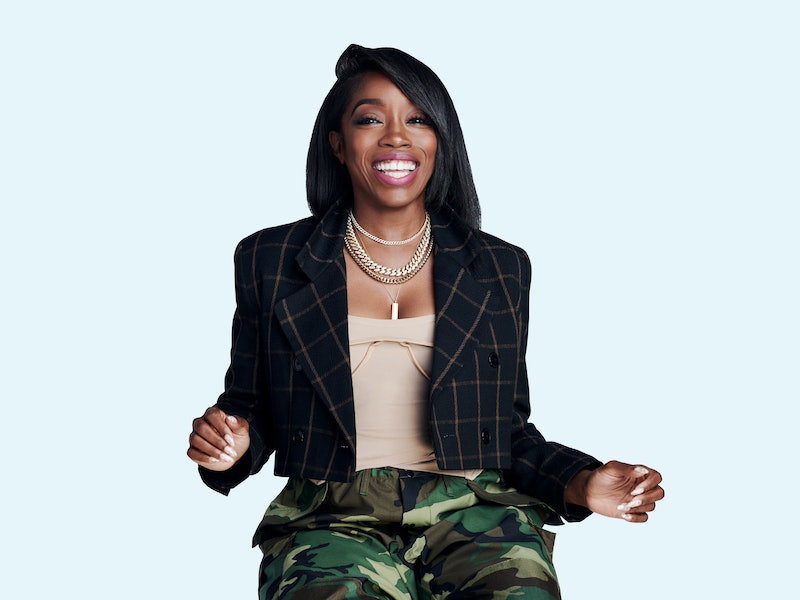 In 2004, West Londoner Estelle began making waves with her acclaimed debut album The 18th Day. What followed was an impressive run of chart success, including the 2008 sophomore release Shine and the now iconic Kanye West duet “American Boy.” A song which catapulted the singer-songwriter to international prominence and earned Estelle her first Grammy Award, among other accolades.

Today, in between working on music and forthcoming film and TV projects, the “Thank You” performer’s wide breadth of musical knowledge can be enjoyed on Apple Music Hits’ The Estelle Show. Throughout each episode, the award-winning songwriter talks listeners through some of the greatest music of the past few decades, spotlighting some of her personal favourites from years gone by, as well as contemporary voices to look out for.

Joined by the occasional guest, Estelle also shares a varied catalogue of music that inspires and excites her, playing everyone from Bob Marley, Prince, and Madonna to Wizkid and Lil Wayne.

I (virtually) sat down with Estelle to discuss her venture into radio, the artists who have inspired her, and her Living Room Soul playlist.

Tell me about The Estelle Show on Apple Music Hits, what can listeners expect?

Expect your memory to be jogged. Expect to be surprised by how many records you actually know, and by how many you don’t know. Listeners will get to learn new music as well as reminisce on some of their favourite tracks, or on the first time they heard a certain song. People use music as a vehicle to get us through our days, and my show is the soundtrack to getting you through your days. You’re gonna get a good steady mix of old and new.

The show promises to showcase timeless classics as well as fresh young voices, who are some of your favourite artists right now?

I love Tiana Major9, I think she's incredible. I also think Giveon is really good, I think he's got a very distinctive good voice. Vocal wise, he reminds me of a British group back in the early ‘90s, I can’t remember their name. But, they are definitely two of my favourite artists right now.

Who are some of your favourite artists that you never get sick of listening to?

Well, I’m a musician, so I can’t pick just one. I think this is why I have The Estelle Show because I like a lot of artists. I can pick the quality in a lot of music, you know? So it ranges from everyone like Marvin Gaye and the Bee Gees, to Donna Summer and Diana Ross, all the way to Snoop and Dre. Also, my latest obsession is D Smoke, I think he's incredible. Where Kendrick will give you music and go away, Smoke will give you music and stay. But, I can appreciate pretty much everything as long as it has good lyrics. And by good lyrics, I mean lyrics that evoke a feeling.

Who would be some of your dream guests on The Estelle Show?

I really really really would love Diana Ross. I don't know if I'd be able to crack that legendary Motown composure, but I just think she has the best stories and no one ever knew. Also, Kathy Sledge is someone I’d like to interview, as well as the Bee Gees. Those are the type of people I want to talk to because they’re almost like a library that is slowly but surely burning to the ground, and we need to get all the information from them.

Tell us about the Living Room Soul playlist, what is the inspiration behind it?

The playlist is essentially filled with the kind of records you’d dance to around your living room and back in the ‘70s. It’s exciting and very energetic and has everything from Jocelyn Brown’s “Somebody Else’s Guy” to Candy Staton’s “Young Hearts Run Free,” Sylvester’s “Over and Over.” It has that kind of energy, just back to back up-tempo and Sunday afternoon dance vibes.

The Estelle Show airs Monday-Friday from midday BST on Apple Music Hits. Tune in live for free or on-demand with an Apple Music subscription at apple.co/_TheEstelleShow.

More like this
The Spice Girls Are Set To Reunite At King Charles III’s Coronation
By Sam Ramsden
This Girls Aloud x Sugababes Collab Still Hits All The Right Notes
By Sophie McEvoy
8 Easter Eggs From Taylor Swift's “Lavender Haze” Music Video
By Shahed Ezaydi
Harry Styles Had A Major Stage Malfunction At The Grammys
By Darshita Goyal
Get The Very Best Of Bustle/UK
Sign up for Bustle UK's twice-weekly newsletter, featuring the latest must-watch TV, moving personal stories, and expert advice on the hottest viral buys.