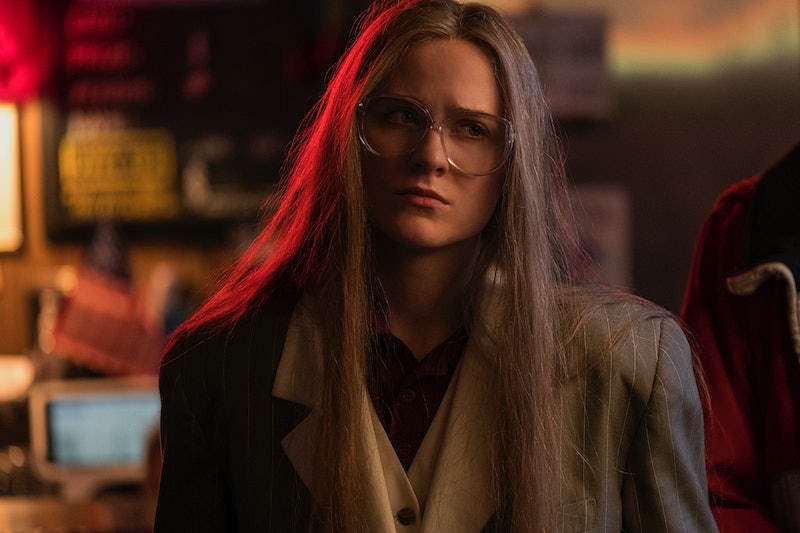 In Miranda July's latest film Kajillionaire, Evan Rachel Wood plays a young woman with an odd name. Old Dolio, as she's called, has spent the entire 26 years of her life swindling, scamming, and stealing with her parents; con-artists Theresa (Debra Winger) and Robert (Richard Jenkins). During their latest heist, however, they charm a stranger named Melanie (Gina Rodriguez) into joining their gang of grifters. But Melanie's introduction into their not-so-merry band of thieves turns the family upside down and leads to Old Dolio questioning her devotion to her parents.

Not having a traditional childhood is something that Wood connected with right away. Recently, Wood appeared in the Alex Winter documentary Showbiz Kids where she spoke of her non-traditional life as a child actor. Old Dolio has been effectively "working" for her parents her entire life, and Wood knew exactly how that felt. "I absolutely related in a way of not having a conventional childhood," Wood tells Bustle. "Living in a bubble makes it really hard to relate to other people, especially other people your age. Old Dolio is someone who's been treated like a peer and not as a child and working to please her parents. It's very common for a child star to confuse performance and adoration with love."

Old Dolio starts to become aware of the negative impact her childhood had on her shortly after meeting Melanie. "One of the realizations Old Dolio is having when she meets Melanie is she sees her parents are capable of giving that kind of affection and starts to question everything," Wood says. "She feels quite cheated, she knows that something isn't quite right but hasn't been able to put her finger on it. It's really devastating to watch."

Having been raised in such a bubble, Old Dolio isn't a "conventional" or "typical" young woman. She's socially awkward, shy, and doesn't know how to relate to others or behave in the public world. In the film's press notes, July details that Wood imagined Old Dolio to be a lot like Edward Scissorhands. Her aesthetic has hints of Billie Eilish, while her personality has echoes of July herself.

"I definitely drew from parts of Miranda," Wood says. Wood and July got together very early in the process and started working on Old Dolio's physicality. They watched videos and improvised scenes. July even gave her clothes to wear while they rehearsed and gave Wood odd scenarios to enact. "For example, I'd do [a scene] once and I couldn't say anything. I'd do it again and I couldn't look anybody in the eye. I'd do it another time only this time I'd do it like a wild animal."

Wood's experiences were a great source to mine for Old Dolio's feelings of isolation, but the experience wasn't too close to home. "[Old Dolio] is so removed from any kind of societal norm and devoid of affection or physical touch," Wood says. "I had to erase anything that was mine and build back up with a new set of rules."

More like this
11 Movies To Watch At The 2023 Sundance Film Festival
By Chloe Foussianes
Austin Butler Recalls Lisa Marie Presley Showing Him Elvis’ Bedroom
By Jake Viswanath
Pamela Anderson’s Dating & Marriage History Could Be Its Own TV Series
By Jake Viswanath
Owen Thiele Asked Sundance Attendees About Films That Don’t Exist
By Grace Wehniainen
Get Even More From Bustle — Sign Up For The Newsletter
From hair trends to relationship advice, our daily newsletter has everything you need to sound like a person who’s on TikTok, even if you aren’t.