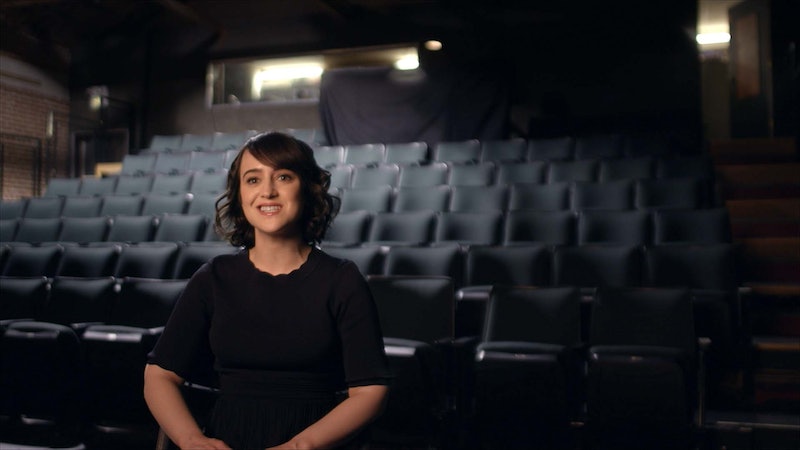 Mrs. Doubtfire. Miracle on 34th Street. Thomas and the Magic Railroad. What do these films all have in common? Mara Wilson. As a child actor, Wilson broke out at six years old as the adorable Natalie, acting alongside comedy legend Robin Williams in 1993's Mrs. Doubtfire. After that, Wilson went on to act in a remake of Miracle on 34th Street and then got the starring role in Matilda, an adaptation of the beloved Roald Dahl novel. But Wilson quit acting after her final role in 2000's Thomas and the Magic Railroad and took a long break from Hollywood. Now, Wilson's appearing in the HBO documentary Showbiz Kids, and dishing all about her feelings about being a child star.

Directed by Alex Winter, Showbiz Kids features interviews with child stars both formerly famous and still very much so. Actors like Evan Rachel Wood, Milla Jovovich, Jada Pinkett Smith, Todd Bridges (Willis from Diff'rent Strokes), Wil Wheaton, and Henry Thomas (Elliott from E.T.) appear in the doc to discuss their careers and look back at the intense pressures they faced as child actors.

In the film, Wilson reflects on the awkwardness of growing up in the public eye. From how weird it felt to have people recognize her on the street as a child, to the loneliness she experienced missing out on so many seemingly normal childhood rituals. She quit acting at 13, but has stayed in the business by becoming a voice-over actor in animation and fiction podcasts like BoJack Horseman and Welcome to Night Vale. Wilson has also found success as a writer, having published the memoir Where Am I Now? True Stories of Girlhood and Accidental Fame. She is very active on Twitter, and also runs a newsletter called Shan't We Tell the Vicar?

While Wilson has been vocal about her experiences as a child actor in the past, appearing in Showbiz Kids was still a revelatory experience. "A lot of what I'd said I had either put down only in writing or had expressed to friends and family but not said out loud," Wilson tells Bustle. "But what surprised me when I watched the film was how similar so many other child actors' experiences were. There was one moment where there's a clip of me saying something that I had never really admitted to before, but right after there were clips of two other people saying almost the exact same thing. It was heartening to watch."

She's also optimistic that people will learn from the stars' shared experiences. Wilson hopes that people who watch the film take away that, "There's a narrative that's been forced upon child actors. Grown-up former child actors are seen as objects of derision or objects of pity; everyone expects us to 'flame out' or have breakdowns, and then judges us harshly when or if we do. I have always wished people would actually listen to what we have to say, instead of assuming what happened to us."

Which is what Wilson finds so powerful about Showbiz Kids — it's giving former child stars a platform to be heard. "[The film] allows us to speak for ourselves, to tell our own stories, the good and the bad. Many of us actually did love acting and performing, and were happy to do so, and some of us actually found a lot of structure on film and TV show sets," she says. "But we also have been under tremendous pressure our whole lives, and many of us have experienced things no child ever should. It's more complicated than one might think. So I hope people listen, and I hope they get the nuance of it."

More like this
Here’s What Happens To Bill & Frank In 'The Last Of Us' Video Game
By Brad Witter
Here’s Everything Coming To & Leaving Netflix In February
By Jake Viswanath
The 'Gossip Girl' Reboot Creator Is “Looking For A New Home” To Air A Potential Season 3
By Brad Witter
The 8 Best Aidan Shaw Moments On 'Sex And The City'
By Grace Wehniainen
Get Even More From Bustle — Sign Up For The Newsletter
From hair trends to relationship advice, our daily newsletter has everything you need to sound like a person who’s on TikTok, even if you aren’t.