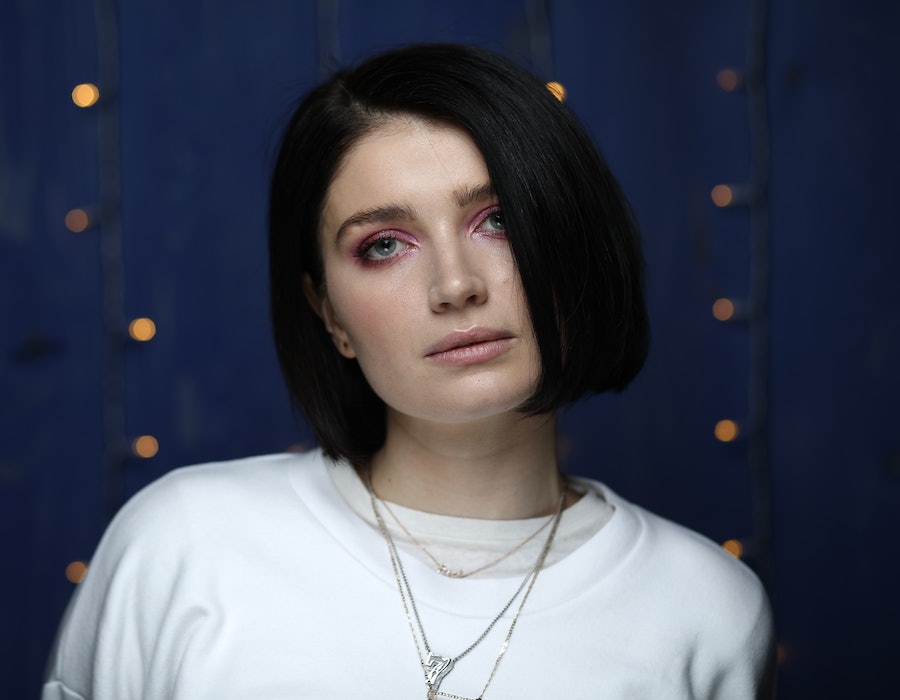 Until recently, you’d be forgiven for thinking that Eve Hewson was from another era. Her onscreen wardrobe has been dominated by Victorian standing collars, her dark hair reliably swept back, and her performances — in series like The Knick and the BBC drama The Luminaries — constricted by the social mores of the time period in which she plays. But in her new Netflix thriller Behind Her Eyes, the Irish actor isn’t simply ditching the buttoned-up corsets for luxury athleisure and satin robes — she’s taking a baseball bat to set and fully releasing her rage between scenes.

“I was sort of blessed with really great, serious, dramatic, grounded work,” Hewson says of her career thus far. “So, when I got this part, I really let it rip. I went all out. And I've never had more fun, honestly.”

It’s hard to describe Behind Her Eyes without giving too much away. Based on the international best-selling novel by Sarah Pinborough, it’s a moody and twisted love triangle with a big swing ending that will leave you rattled. When I talk to Hewson days after finishing it, I’m still perturbed. “I’m so glad it f*cked you up,” she tells me, laughing. “That's the kind of work I like to do!”

Which isn’t to say playing Adele — a lonely, temperamental housewife who is alternately icy and volatile — came naturally to Hewson. The 29-year-old is infectiously chatty, our conversation ricocheting from her work to her adoration of Alec Baldwin (she listens to his podcast Here’s The Thing in the bath) to my love of Cameo (“Wait, is it the thing that Bella Thorne is on?”). It was the bat, which she asked the prop department to procure along with a cushion to hit, that helped her rev up before filming.

“Before I had to do an intense scene, I would just be whacking the bat and hear, ‘Rolling camera, action,’ throw the bat away and go into it,” she says. It’s a testament to Hewson’s approachability that the Method-y tic wasn’t a turn-off on set. “Everybody on the crew, if we were having a stressful day or people were tired and things weren't going well, they'd be like, ‘Can I borrow your bat?’”

Hewson already has a lifetime of experience upsetting expectations. The same my-therapy-bat-is-your-therapy-bat ethos at odds with playing Adele is also at odds with what most people expect from rock star progeny. “The bar is set so low for your personality. They really just think you're going to be a piece of sh*t," Hewson says of growing up being known as Bono's daughter. "If you just say please and thank you, people are floored by that." It was a childhood that came with some desirable perks, to be sure: Hewson would spend summer breaks on U2 tour buses, prank calling her dad’s A-list phone contacts, like Justin Timberlake, to pass time.

By Hewson’s description, the energy at Bono’s full house seems pretty typical. “It's people fighting over the potatoes,” she says. After 10 years living on her own in New York City, the NYU grad moved home to Dublin just as the pandemic hit, sad to be leaving friends but ecstatic to be reunited with her Guinness. “Because of lockdown you could hire a truck to come and they just do pints for you,” she says proudly. “The Irish people will always find a way.” Hewson calls mornings with her parents and three siblings “pretty mental.” Not that she knows firsthand, having completely reverted to her teenage self, including her teenage sleeping habits. “I don't experience the mornings,” she tells me. “When you work, you have to get up like 3 in the morning, you're working all day long, you never sleep. So I thought, okay, well I'll just take advantage of this, and I will sleep forever.”

In fairness, her 2019 was as hectic as her 2020 was soporific. She starred in the biopic Tesla — yes, another period piece — opposite Ethan Hawke, headed off to New Zealand to shoot the miniseries The Luminaries, and eventually landed in Scotland for Behind Her Eyes. After a run of capital-D dramas, Hewson’s beginning to figure out exactly what kind of career she wants to have. She loves Carrie Fisher, whose semi-autobiographical film Postcards From the Edge is Hewson’s all time favorite. “I think it's a really funny, honest depiction of what it's like working as an actor. And also as an actor who already has a famous parent.” And, of course, there’s Baldwin, who actually impersonated Bono on SNL in the '90s. “He seems like he'd be a good time on set and as much as I love working with great serious actors, you also want to have a bit of banter and be able to enjoy your work.”

Now, her year of hibernation is ending. Hewson is away from home once again, in London this time. Well-slept and clear-eyed about the kind of projects she wants to pursue, she’s hoping 2021 comes with “a lot of a work” and “maybe a sprinkle of some love thrown in there.” Oh, and getting booked on Baldwin’s podcast, of course. She’s never met him, but hopes injecting it into the ether can make it come true.

And if that doesn’t work, she could always swipe her dad’s cell phone for a prank call again.

More like this
'The Queen’s Gambit' Season 2 Tweet Wasn’t From Anya Taylor-Joy
By Mary Kate McGrath, Jack Irvin and Grace Wehniainen
Ashton Kutcher Wants Danny Masterson “To Be Found Innocent” In Rape Retrial
By Jake Viswanath
'The Crown' Season 6 Has Suspended Filming "Out Of Respect" For The Queen's Death
By Bustle Staff
Here’s Everything Coming To & Leaving Netflix In February
By Jake Viswanath
Get Even More From Bustle — Sign Up For The Newsletter
From hair trends to relationship advice, our daily newsletter has everything you need to sound like a person who’s on TikTok, even if you aren’t.