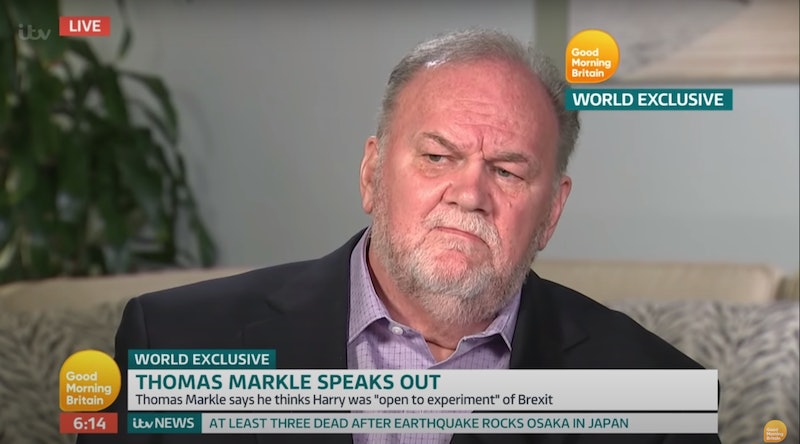 In January 2020, Meghan Markle's father Thomas Markle starred in a Channel 5 documentary to set the record straight about the seemingly strained relationship between him and his daughter. However, Markle has since revealed to The Sun that he wasn't happy with the finished product, and intends to release a new film that will chronicle his life from his career in television and raising Meghan to more recent events like his absence from the royal wedding. So here's everything we know about Thomas Markle's new documentary.

Hoping to have the documentary "completed later this year," Markle told the Sun that it will "figure out what went wrong" in their relationship. "It begins with my life, my family, and my love of theatre and television and how I got there," Markle explained. It will follow his "life with Meghan, growing up, her school days until she went off to college, and when her career began."

Featuring unseen home footage of Meghan's upbringing, Markle wanted to portray what he believes to be a truer version of events than what was shown in the previous documentary. "It was not edited in the correct order, dates were wrong, and it had too much generic public domain film added," he told the Sun. "My documentary will have some new videos and my favourite photo of my 'baby girl' [...] I think we will do a good job."

Channel 5's version, titled Thomas Markle: My Story, saw Markle set the record straight in a one-on-one interview with the broadcaster. It covered the "staged" paparazzi photos that were released prior to Meghan and Harry's wedding, as well as Markle not being able to attend the wedding due to serious health problems. The documentary also covered the publication of Meghan's private letter to her father, and why Markle decided to publish part of it in British tabloids.