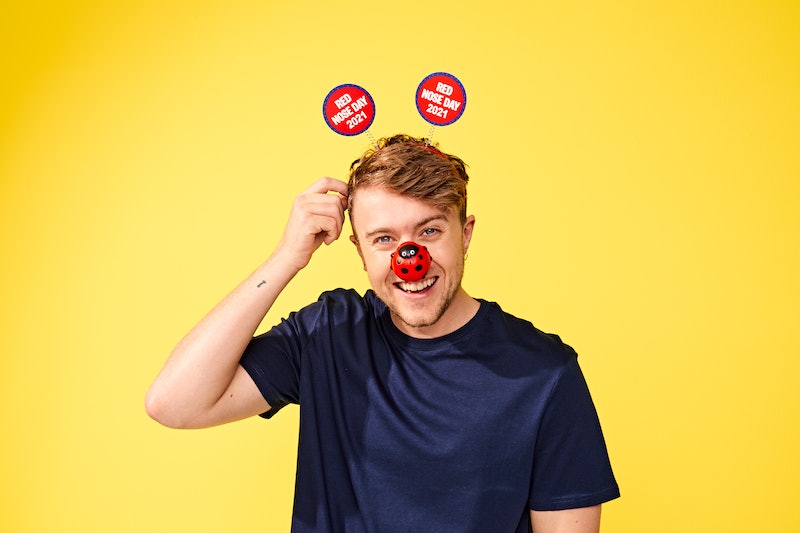 The pandemic has caused major disruptions to our regular TV schedules. However, when it comes to the annual Red Nose Day fundraiser, the show must go on. In aid of Comic Relief, this year's charity event will aim to raise money for a range of issues brought on by the Covid-19 pandemic. If you'd like to find out more about what to expect and how to get involved, here's everything you need to know about Red Nose Day 2021.

Red Nose Day 2021 will take place on Friday, March 19. Fundraising events in support of Comic Relief will be held throughout the big day, marking the charity's 35th anniversary.

Per Radio Times, Red Nose Day events will air throughout Friday, March 19 on CBeebies and CBBC, and culminate in the main TV fundraiser, which will be broadcast live on BBC One.

The Red Nose Day 2021 telethon will be hosted by Davina McCall, Paddy McGuinness, Alesha Dixon, David Tennant and Comic Relief co-founder, Sir Lenny Henry. As usual, the show will be packed full of hilarious sketches, live performances, one-off comedy specials, and a lineup of celebrity cameos — which so far includes Dawn French, who will reprise her iconic role of The Vicar of Dibley’s Reverend Geraldine Granger, Doctor Who's David Tennant, and Quiz star Michael Sheen, who will appear together in a Staged special.

This year, Red Nose Day will aim to raise money for issues exacerbated by the Covid-19 pandemic, including homelessness, hunger, domestic abuse, and mental health problems. To donate, you can purchase official Red Nose Day 2021 merchandise (including the famous and 100% plastic-free Red Nose), hold your own Comic Relief fundraiser, make a donation on the official Comic Relief website, or donate via phone or text during BBC One's live Red Nose Day 2021 extravaganza.

In 2021, Comic Relief has also launched the Share a Smile campaign, which aims to spread joy between households across the country by encouraging people to download the official Share a Smile poster, add in their favourite joke, and then place it in their window to share it with passers by, local friends and neighbours.

More like this
Turns Out George Clooney Is A Huge Fan Of This Classic British Game Show
By El Hunt
You’ve Got 'Love Island’s Farmer Will All Wrong
By Jack Orenstein
This Pre-'Love Island' Video Of Olivia & Zara Together Changes Everything
By Bustle UK
A New Netflix Doc Will Explore The Unsolved Murder Of Jill Dando
By Sam Ramsden
Get The Very Best Of Bustle/UK
Sign up for Bustle UK's twice-weekly newsletter, featuring the latest must-watch TV, moving personal stories, and expert advice on the hottest viral buys.