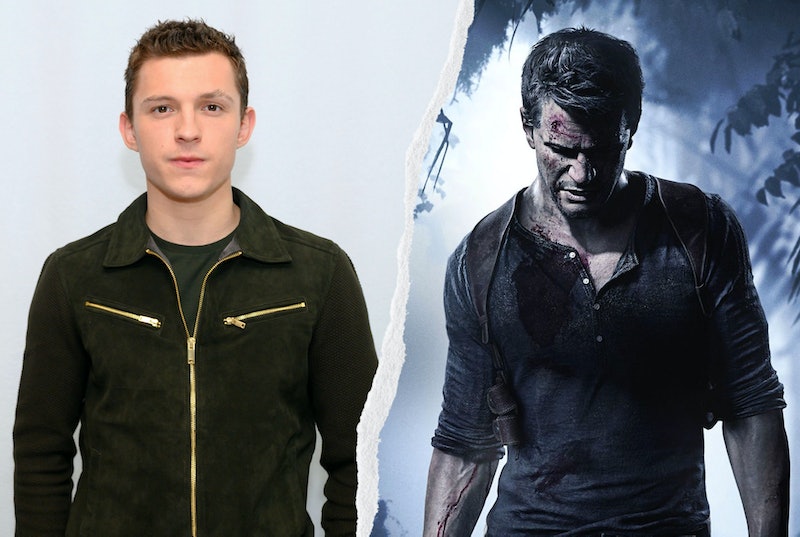 Thanks to Sonic and Detective Pikachu, video game movies are having a well-deserved renaissance, which seems to be helping adaptations that were otherwise in development purgatory. In 2019, Tom Holland signed up to play the titular character of the Uncharted video game series, and recently began filming in Spain. Last March, Antonio Banderas was revealed to be joining Tom Holland and Mark Whalberg alongside Tati Gabrielle and Sophia Ali, but there’s no word yet on which characters they’ll be playing. So here’s everything you need to know about Uncharted and its movie adaptation, which is shaping up to be a pretty monumental event for fans of the series.

Who Is Starring In Uncharted?

Currently, Holland and Wahlberg are the only two confirmed to be playing actual characters. Holland is in the titular role, while Wahlberg will be playing Drake’s best friend and father figure Victor ‘Sully’ Sullivan.

But the trailer also features Sophia Taylor Ali (Truth or Dare), Antonio Banderas (Hitman’s Wife’s Bodyguard), and Tati Gabrielle (The Chilling Adventures of Sabrina. Ali is rumoured to be playing Chloe Frazer, a treasure hunter who first appears in the second Uncharted game Among Thieves as well as the spin-off Uncharted: The Lost Legacy as a main character. Banderas will reportedly be the film’s main villain, and Gabrielle’s character has yet to be revealed.

Is There A Trailer For Uncharted?

On Oct. 21, 2021, PlayStation released the first official trailer for Uncharted. It didn’t give too much of the plot away, and fans finally got to see some familiar set pieces from the Uncharted series including that plane scene from Drake’s Deception.

As exciting as it is to finally see Holland in action as Nathan Drake, some fans are still a little uncertain as to the direction the film is taking. As ComicBook.com notes, many questioned Holland’s casting as he “might’ve been too young and clean cut to play even a younger version of the protagonist”, as well as Wahlberg’s lack of a mustache for his portrayal of Sully.

Is There A Release Date For Uncharted?

Since it was first announced, the release date for Uncharted has moved around quite a bit. It was initially slated for release July 2021, but due to the ongoing pandemic it’s been pushed back to Feb. 11, 2022, per THR.

What Is Uncharted About?

The action-adventure series follows Nathan Drake, an experienced treasure hunter who starts the series off by recovering the coffin of a long-lost relative — famed explorer Sir Francis Drake — accompanied by Elena Fisher, a reporter covering Nathan’s treasure explorations for her TV show. In the coffin, they discover Francis Drake’s diary, which contains the location of El Dorado, a mythical tribal chief. The pair, along with Drake’s friend and mentor Victor ‘Sully’ Sullivan, then set out to discover El Dorado and its treasures.

This serves as the catalyst for the rest of the series, which currently consists of four main games and a number of smaller instalments. The games are linear, but feature some flashbacks to Drake’s younger years.

Which Uncharted Game Will The Movie Be Based On?

According to entertainment site Cinema Blend, A Thief’s End has been the main inspiration for the film adaptation. “One of my favourite video games ever is the fourth Uncharted game,” Holland told IGN at the premiere for Pixar’s Onward. “And lots of the inspiration from the film has come from that game in particular.” As Screen Rant notes, the film isn’t adapting any of the games “beat for beat”, and will instead be an original story based on the narrative and characters.

A Thief’s End is partly a prequel to the entire Uncharted series, featuring flashbacks to Drake’s past and the introduction of his older brother Sam. So it’s the perfect place to start for new audiences to become acquainted with Drake and the rest of the characters. “[W]ithout giving too much away, it’s more of an origin story,” Wahlberg recently told Collider. “Meeting them, and Nathan becoming Nathan. Sully and him meeting, trying to not only get over on each other, but also starting to partner up and develop that relationship. It’ll be very cool.” Uncharted 3: Drake’s Deception also heavily features a young Drake meeting Sully for the for the first time, so that’s guaranteed to be a major influence as well.

At the start of 2021, the movie’s official Twitter shared new photos of some of the artefacts that will feature in the film, including a gold cross that also seems to act as a key, an ancient world map, and a dusty figure on horseback.

Why Has It Taken So Long For Uncharted To Be Adapted To The Big Screen?

As Collider reports, the Uncharted film has been on the table since 2010 but has never been able to hold onto a director (David O. Russell, Shawn Levy, and Dan Trachtenberg were some of those who came and went). That was until Sony signed Holland to play Drake last year, with pre-production due to start in the next month or so.

Sony has also secured a director for the film, Ruben Fleischer (Zombieland, Venom). The seventh director attached to the series, Fleischer’s involvement follows the departure of Travis Knight at the beginning of 2020. Hopefully, this news along with the confirmation of pre-production and further cast announcements means that 2021 will finally be the year that Uncharted makes it to the big screen.

This article was originally published on March 6, 2020