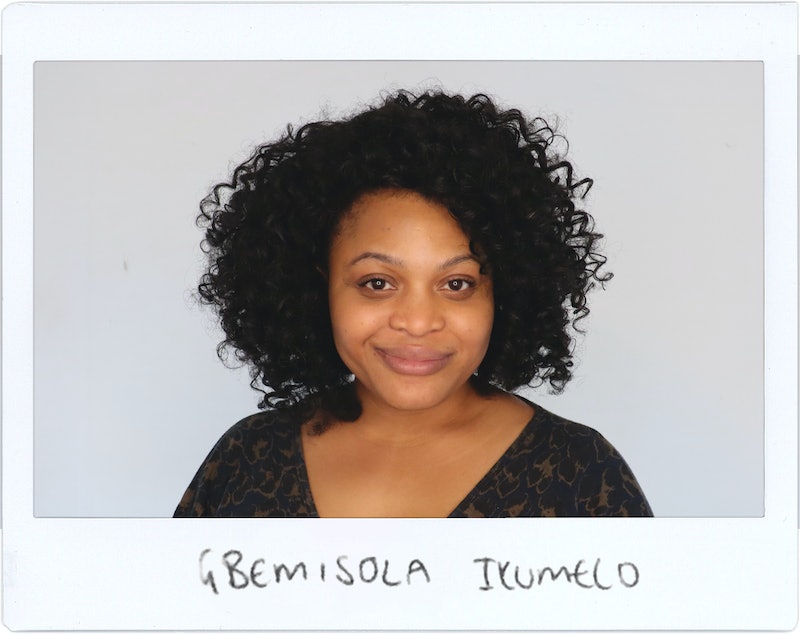 When celebrities (virtually) hang out with Bustle writers, we want to give them the chance to leave their mark. Literally. So we hand them a pen, a piece of paper, a few questions, and ask them to get creative. This time, actor and Famalam star Gbemisola Ikumelo is leaving her mark in the Bustle Booth.

Considering she's just been nominated for the 2020 Best Female Performance in a Comedy BAFTA, you may be surprised to hear that, for much of her life, Famalam's Gbemisola Ikumelo didn't think comedy was her thing.

"I write very serious dramas, but I'd never actually looked and dissected what makes something a comedy," she tells me over the phone. Before joining the cast of BBC Three sitcom Sunny D in 2016, Ikumelo made her mark in theatre writing and directing productions such as The Den, a darkly powerful, immersive drama. But when it came to comedy, she says, "I didn't realise I could do it."

"I'd say comedy is something that's happened in the last five years for me, Famalam was the first time I was looking at being a comedy writer, and it felt really natural," she tells me, adding: "I just love going to work and laughing every day."

The process was very natural, Ikumelo explains, because she finds laughter and pain blend easily together in her work. "I always sort of genre-bend ideas in terms of story anyway, but I've noticed with comedy you slowly become aware when something's not working. There are beats and rhythm to writing something funny, and it's really fun to dissect and delve into what that is," she says.

All this hard work and analysis paid off in Ikumelo's comedy short Brain in Gear, which she wrote, directed, and starred in. It's the show that gained her a second BAFTA nod this year for Best Short Form Programme. "It was quite crazy [being nominated twice]," she tells me. "There's something lovely about waking up to great news, especially now."

Brain in Gear sees Ikumelo play Remi, a single woman in her late twenties trying to navigate all the conflicting advice coming from her inner thoughts (all of whom manifests as other, physcial Remis). Conceptualised well before the coronavirus crisis, the short has ended up being even more relatable given the circumstances, which Ikumelo is pretty chuffed about.

"This person is sort of isolate and a bit of a recluse," she says. "The thoughts in her head force her to engage a bit more, and those are the kinds of decisions I'm literally having with myself [in lockdown]. Hopefully, viewers will have had similar ones, if not it'll be really awkward for me!"

And while working in lockdown had been frustrating for Ikumelo at times, "the reality is the life of a creative has never been a straight line, it's always full of the unknown," she says. "For me, it's really forced me to just be a lot more productive in terms of work. So in some ways there's the creative part of me that feels that it's been a gift, but you know, there's also the part that wants freedom."