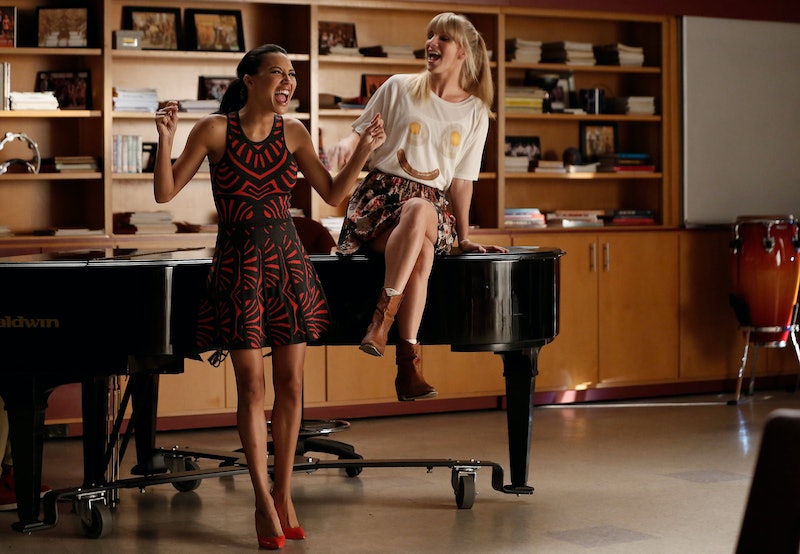 On Monday, July 13, Naya Rivera was found dead nearly a week after she was initially reported missing. The Glee star disappeared on July 8, when her son Josey Dorsey was found alone in a boat on Lake Piru. And, while fans hoped and prayed for her safe return, now they are paying their respects to the actor, and the role that made them fall in love with her. Fan tributes to Naya Rivera are celebrating her Glee character Santana Lopez and how she helped many fans feel empowered, especially those apart of the LGBTQ community.

On Glee, Santana started out as a fierce, quick-witted cheerleader and loyal sidekick to Queen Bee Quinn Fabray. As she quickly grew into a fan favorite, Rivera was promoted to a series regular, and got her own love story, falling for her onscreen BFF, Brittany S. Pierce. Throughout the series, Santana had a difficult time grappling with her sexuality, even after high school. But, her story ended happily, as Santana and Brittany got married during the show's final season, and then promptly honeymoon-ed in somewhere called Lesbos Island, in typical Glee fashion.

In the wake of her tragic death, fans are taking to social media to explain how Rivera's arc on Glee helped them come into their own growing up. For many, Santana and her relationship with Brittany, or as fans lovingly call the couple, Brittana, was their first exposure to LGBTQ representation on TV. And as Rivera's friend Jamie Primak said on Twitter, Rivera was very proud of the couple's impact on fans' lives. "I want you to know she knew this - about her character - it’s one of the things she was most proud of," she wrote.

For some LGBTQ fans, Santana's journey helped them find themselves and gain the courage to come out publicly, whether it be as bisexual, lesbian, or another sexual identity. As writer Whembley Sewell beautifully put it, "It is no exaggeration to say Naya Rivera changed my life."

Some fans also pointed out Rivera's Latina heritage, saying that her representation of an LGBTQ person of color on TV made Santana all the more important.

It's safe to say that Rivera's impact will never be forgotten.

More like this
Linda Ronstadt’s “Long Long Time” Plays A Pivotal Role In The Last Of Us
By Brad Witter
Here’s What Happens To Bill & Frank In 'The Last Of Us' Video Game
By Brad Witter
'The Queen’s Gambit' Season 2 Tweet Wasn’t From Anya Taylor-Joy
By Mary Kate McGrath, Jack Irvin and Grace Wehniainen
Jameela Jamil Defends Sam Smith After Trolls Body-Shamed Them
By Jake Viswanath
Get Even More From Bustle — Sign Up For The Newsletter
From hair trends to relationship advice, our daily newsletter has everything you need to sound like a person who’s on TikTok, even if you aren’t.