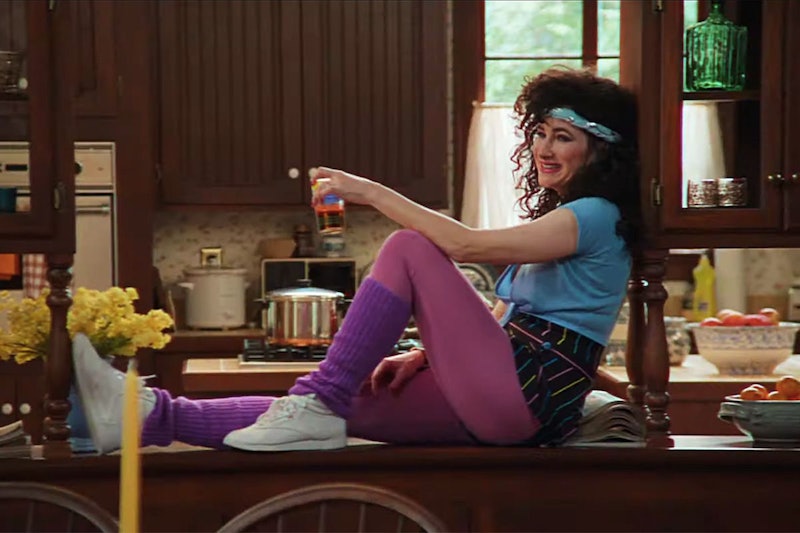 For a franchise that includes a talking raccoon, WandaVision looks weird even for the MCU. The first-ever live-action MCU series for Disney+ is pulling no punches when it comes to strangeness, setting itself up as a time-traveling sitcom/alternate reality drama that's set to rewrite MCU history in some big ways. Contributing to the madness is a bunch of oddball new characters, with Kathryn Hahn's Agnes leading the pack. Agnes from WandaVision definitely looks like she'll be bringing a good deal of comic relief to the series, but there's likely a lot more to the character lurking beneath the surface.

At first glance, Agnes looks to be a brand new character created for the series, as there appears to be no direct comic equivalent. In the show's mysterious trailers, she pops up in different timelines, always appearing as a neighbor and friend to Wanda and Vision. However, one trailer also features a unique moment where, after being touched by Vision, Agnes seems to "wake up" and realize that she is no longer residing in reality. This version of Agnes initially believes herself to be dead because she knows that Vision is dead. This all lends credence to the theory that WandaVision is adapting a version of the Avengers Disassembled/House of M storylines from the comics, where the Scarlet Witch undergoes a mental breakdown following the death of Vision and creates an alternate reality in which she has children. The series appears to have some characters entering this reality from the outside world, who apparently then get sucked into its delusions. Agnes could very well be one of these characters.

There's also a pretty good chance that Agnes isn't a new character at all, but rather a reworked version of a comic book character. Fans online, as reported by CBR.com, have theorized that Agnes is actually the Marvel Comics character Agatha Harkness. In addition to the closeness of their names (AGatha HarkNESs, get it?) and the fact that both wear a similar brooch, Agnes and Agatha also share a closeness to Wanda in regards to her warped reality dimension. In the comics, it is Agatha — an actual witch — who mentors Wanda in the ways of magic and helps her control her reality-warping powers. Those powers seem to be on the verge of getting out of control in WandaVision — hence why she and the deceased-Vision are acting out different decades' examples of sitcom marital bliss — and Agnes may be there to make sure she doesn't take things too far. One possible example of this mentorship can be seen in one of the trailers when Agnes sees that Wanda and Vision now have twin babies. Seeming disturbed by this, Agnes declares, "Let's just take it from the top," possibly implying that those twins then get erased from existence (spoiler: that's basically what happens in the comics).

If this theory proves true and Agnes is really Agatha Harkness, then she may prove to be the most important character in WandaVision. Fans of the comics know that very bad things happen when the Scarlet Witch loses control of her powers, so if Agnes is able to keep her from doing so, then she might just end up saving the entire MCU.