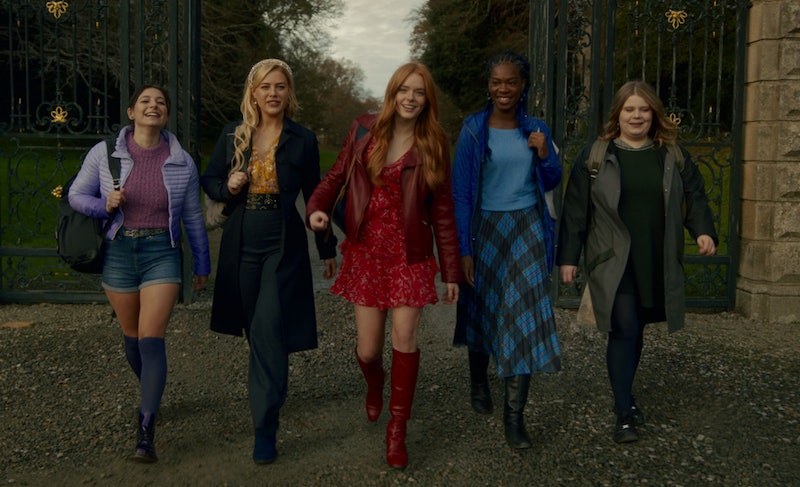 Fans of the original Winx Club cartoon won't see a lot of similarities in Netflix's new live-action adaptation, Fate: The Winx Saga. Though the plot is the same for the most part, the tone and storylines are more mature than anything in the kids' series, in the same way that The Chilling Adventures of Sabrina put a much darker spin on Sabrina the Teenage Witch.

Like in the Winx Club animation, the show centers around fairies at a magical school called Alfea. Most of the characters retain the same powers that they had in the cartoon, but a couple fairies aren't featured in the Netflix show at all. And some characters whose designs were inspired by people of color have been cast with white actors, leading to backlash from fans.

That said, there are a few new characters viewers will get to know, too, including the earth fairy Terra. She's the cousin of Flora, a nature fairy from the original series who's not in the Netflix show but could appear down the line. For now, here's what to know about the Season 1 characters and the people playing them.

The series' main protagonist is Bloom, who was raised by human parents on Earth before discovering her fire fairy powers later in life.

Prior to joining Fate: The Winx Saga, actor Abigail Cowen was best known for playing Dorcas in The Chilling Adventures of Sabrina. She also played Eliza in The Fosters and appeared in two episodes of Stranger Things as a Hawkins High student.

Stella is a sun fairy who can manipulate light. She's also pretty good at manipulating people and quickly gets off on the wrong foot with her new roommates at school.

She's played by Hannah Van Der Westhuysen, who's had a few small roles in British shows like The Fugitives and Grantchester.

Aisha is a water fairy who's learned how to control her powers by being regimented about her swimming routine — twice a day, every day.

Though Keke Palmer voices Aisha in the animated show, Precious Mustapha portrays her in the live-action series. Mustapha previously had a small role on the British police procedural Code 404, but Winx is one of her biggest roles to date.

Terra is an earth fairy who can control plants. She's played by Eliot Salt, who you may recognize as Marianne's friend Joanna in Hulu's Normal People.

As a mind fairy, Musa is able to see and feel the emotions of everyone around her. This often overwhelms her, so she likes to listen to music to block out the noise.

She's played by Elisha Applebaum in her first major role. Prior to Fate, Applebaum was in a couple of short films and had small parts in some relatively unknown horror movies.

Though Sky previously dated Stella, he finds himself drawn to Bloom when she arrives at school for her first year.

Prior to playing Sky, Danny Griffin played Shane in Netflix's 2020 series Get Even.

Sky's friend Riven has kind of a "bad boy" vibe and spends more time getting high than honing his magic.

Before Fate: The Winx Saga, actor Freddi Thorp was in the Netflix show Safe with Michael C. Hall.

The antagonist of the story, Beatrix is seemingly an amalgamation of three characters from the original series who together formed a witch group called The Trix.

Sadie Soverall's only other acting credit is for a movie called Rose Plays Julie, so Fate could prove to be a breakout role.

The first year student is a new character to the Winx world. He's a bit shy and timid at Alfea, but he soon forges a bond with Terra.

Dane is played by Theo Graham, who has a lot of experience on British television shows like Doctors, Clink, Brief Encounters, and the soap opera Hollyoaks.

Fans may recognize actor Eve Best from Nurse Jackie, on which she played Dr. Eleanor O'Hara from 2009 until 2015. She's also a theater star, having performed in everything from Antony and Cleopatra to Much Ado About Nothing, Macbeth, and A Moon for the Misbegotten.