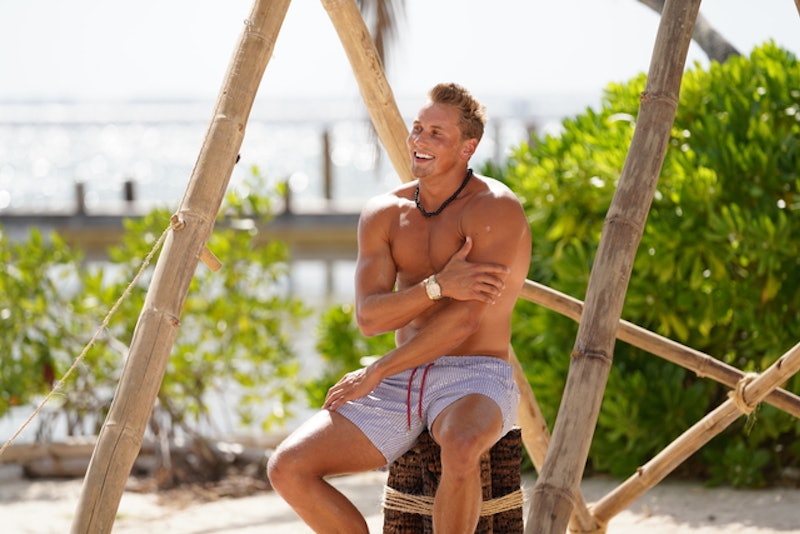 British model Lauren Coogan left the Love Island US villa single last summer, but she found romance very soon after filming wrapped in Las Vegas. As she later explained in an interview, Lauren met Garrett Morosky — who’s now competing on HBO Max’s FBoy Island — at the airport the same day she left the CBS reality series. Lauren said she was “struggling” with her bags at the airport when Garrett approached her. “He kind of just asked me if I needed help, and I did,” she told Film Daily in December 2020. “I was stressed and tired from the show and, you know, we had a few drinks at the airport bar.”

Afterward, they made the “impulsive decision” to explore Vegas and get to know each other better instead of going home. When TMZ cameras caught up with the couple at Los Angeles International Airport in September and posted the footage, Lauren wrote on Instagram that she was “in a desperate panic” about how she was going to explain to her mom that she “just impulse vacationed with a stranger.”

It worked out in the end, as the pair dated for several months afterward. They were very public about their relationship on social media, and all of their steamy and romantic posts are still up on their respective Instagram pages (though they no longer appear to follow each other). Garrett most recently posted a photo of himself and Lauren holding hands on a “last minute birthday trip” on Feb. 2.

Lauren, who still has several Instagram Story highlights of her and Garrett kissing and posing in bed, has posted photos of them together even more recently. “Happy Valentine’s Day to the guy whose first words to me were ‘just don’t fall in love with me,’” she wrote on Feb. 14. “I had never rolled my eyes harder... and less than a month later you were cryinnnn because you loved me too fast ... You make every day Valentine’s Day for me and I have so much gratitude for everything you do.”

The last post Lauren shared of Garrett was on March 15. “Blessed to be able to travel with my best friend,” she captioned a video montage, which she geotagged in Puerto Vallarta. Days earlier, she’d shared more travel memories from their Mexican getaway, writing, “G and I haven’t stopped traveling since we met.”

While it’s unclear when — or if — Lauren and Garrett broke up, this is where the timeline gets complicated. Though FBoy Island premiered in July, showrunner Elan Gale told The Hollywood Reporter that the reality dating series filmed in the Cayman Islands in March and April of 2021. What’s more, Gale added that “everyone was flown out two weeks in advance for a full 14-day quarantine.”

Lauren did say in her Love Island intro video that she likes her men “young, dumb, [and] rich,” so that may clear up any confusion about whether or not Garrett falls into the Fboy or nice guy camp.

More like this
Molly-Mae & Tommy Fury Revealed Their Baby Girl's "Really Unusual" Name
By Sophie McEvoy and Sam Ramsden
Love Is Blind’s Natalie Claims Shayne Signed Up For 'Perfect Match' While They Were “Still Together”
By Brad Witter
Love Island’s Latest Winter Season Finally Has A US Release Date
By Grace Wehniainen
ITV’s New Take On 'Love Island' Is Only For MILFs & DILFs
By Sam Ramsden
Get Even More From Bustle — Sign Up For The Newsletter
From hair trends to relationship advice, our daily newsletter has everything you need to sound like a person who’s on TikTok, even if you aren’t.