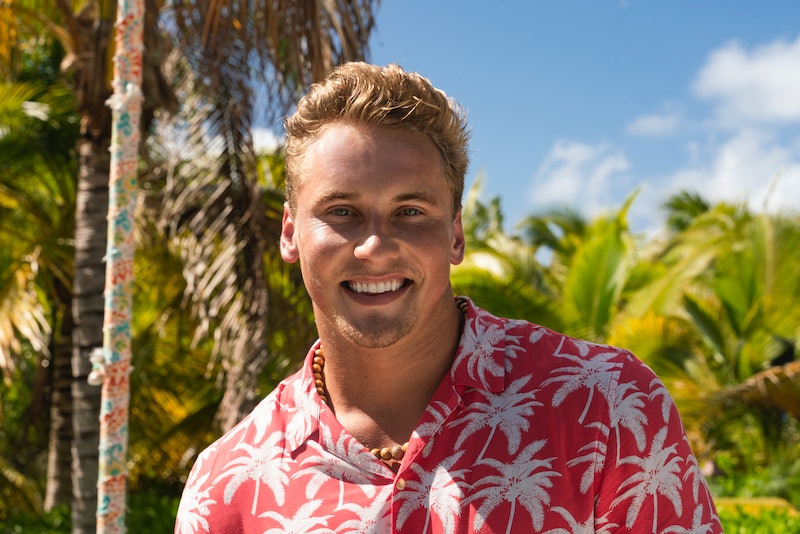 He may be a brawny athlete, but Garrett Morosky will show off a more sensitive side on HBO Max’s FBoy Island. “Who’s tuning in July 29th to watch me ball my eyes out?” Garrett joked on Instagram in response to the show’s trailer, which teases a tearful scene between him and lead Sarah Emig. In an earlier post, he described shooting FBoy Island in the Cayman Islands for three months.

“We had our ups & downs but it’s here and I’m so proud,” Garrett wrote in part. “I won’t be able to grow without support and an amazing team behind me.”

The new dating series stars three women looking for love with 24 suitors — half of whom are self-proclaimed nice guys genuinely looking for a relationship, and half of whom are FBoys only there for a shot at the $100,000 prize. It’s up to them to decipher which one Garrett is, but in a pre-show interview, he said he’s looking for a partner who’s not “basic.” The key to his heart? “Be genuine, goal oriented, and an absolute freak in bed,” Garrett said, noting that dating him feels a lot like skydiving.

Here’s everything else to know about the 29-year-old Pittsburgh native.

After attending Fox Chapel high school in Pittsburgh, Garrett graduated from Meadville, Pennsylvania’s Allegheny College in 2014 with a double major in business economics and mathematics. During his time in college, he played as a left-handed pitcher on the baseball team in addition to pledging the Phi Gamma Delta fraternity.

Garrett is a self-described entrepreneur and accredited investor. His LinkedIn page doesn’t list a work history outside of owning G LLC, a Los Angeles-based company he launched in 2019 that specializes in medical PPE Sales and international manufacturing. HBO Max also notes that Garrett is a “cryptocurrency guru.”

It’s no surprise that Garrett has been posting shirtless Instagram photos since he created his account in 2013. His HBO Max bio lists his interests as “animals and saving the environment,” but Garrett wrote in a June 2019 post that he considers fitness and traveling to be his main passions. Indeed, he’s been to Mexico “well over a dozen times” and has shared vacation photos from locations including Mykonos and the Maldives.

Although Garrett appears mostly solo in his photos, don’t expect many selfies: he just posted his first one since 2014 in February. His parents, Ronald and Donna, appear in some of his older shots. He described his dad as “everything I aspire to be” in 2014. “I have never met such a humble and professional human being!” he captioned a Father’s Day post. “Whether it be sports, raging, girls, business ventures, etc. you have lived those moments with me! Alright, maybe not the girls... With that being said, you have provided me with some amazing opportunities and many more to come! You have literally given me everything in order to succeed in life: human capital, social capital, financial capital, etc. I LOVE YOU DAD!!!”

Perhaps most striking is that Garrett’s Instagram still includes years worth of romantic photos with his exes, including Liberty Netuschil, an America’s Next Top Model alum who he called his “favorite person in the world.” He most recently posted a photo holding hands with model and Love Island US star Lauren Coogan during a last-minute birthday trip in February, and there are photos of him all over her page dating from September 2020 to March 2021. Seems like their relationship would aligned pretty closely with filming for FBoy Island...