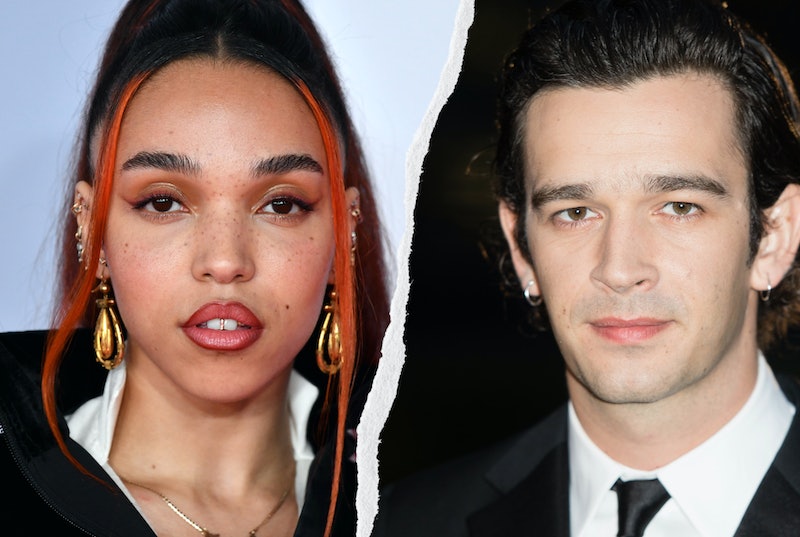 Two of the UK's most innovative and critically acclaimed musicians are an item, but you wouldn't even know it unless you paid close attention. FKA twigs and Matt Healy's relationship timeline proves that while they may keep their romance pretty low-key, they're always supportive of one another. The pair was first linked in January 2020 after being spotted together several times in London — one of those times was even posted on The 1975 lead singer's Instagram. After months of near-silence toward the public, Healy made their relationship Instagram official in December. His latest activity on the platform confirmed they kept going strong during quarantine, and he was there to support her as she came forward with allegations of abuse by ex-boyfriend Shia LaBeouf.

In January 2020, they were spotted attending RuPaul's DragCon UK in London alongside Healy's mother, actor Denise Welch. RuPaul's Drag Race UK star Vinegar Strokes shared a photo with twigs and Healy on Instagram, writing that it was "‪so wonderful to meet the gorgeous @denise_welch, @fkatwigs, @trumanblack and their fabulous family backstage at #DragConUK today."

At the time, E! News reported that they appeared to be "more than just friends" but could not confirm if they were an item. "Matt Healy and FKA twigs were smiling and holding hands while having a great time walking around and watching the shows together," a source told the outlet. "The two kept a pretty low profile... Denise and FKA twigs were getting along great. They were very comfortable around each other."

The next month, PEOPLE reported that the two artists were officially dating. While neither of them commented on the speculation, Healy did share a snapshot of twigs putting her arm around his shoulder while backstage at the NME Awards. (The pair gave separate performances at the London ceremony.) "Thank you NME for the awards and the chaos," he captioned the post.

On Dec. 11, twigs filed a lawsuit against LaBeouf, alleging she suffered "relentless abuse" during their relationship and was the victim of assault, sexual battery, and emotional distress. In an interview with The New York Times, she said she wanted to share her story to show that even people with power, success, and money can still get trapped in abusive situations. "What I went through with Shia was the worst thing I’ve ever been through in the whole of my life,” she told the outlet. “I don’t think people would ever think that it would happen to me. But I think that’s the thing. It can happen to anybody.”

In a statement to The NYT, LaBeouf said that "many of these allegations are not true" but also added, "I have no excuses for my alcoholism or aggression, only rationalizations," he said. "I have been abusive to myself and everyone around me for years. I have a history of hurting the people closest to me. I’m ashamed of that history and am sorry to those I hurt. There is nothing else I can really say."

On Sunday, Dec. 13, Healy shared a sweet photo of twigs, calling her a "legend," "icon," and "LOML," which, of course, means "love of my life." The caption also came complete with a barrage of emojis to show his support for her coming forward with her story about the actor.

That's the latest on twigs and Healy. If they make any more rare declarations of their love, this post will be updated.

More like this
Beyoncé & Jay-Z's Relationship Timeline Proves They're Still "Crazy In Love"
By Jake Viswanath
Who Is Bad Bunny Dating? Gabriela Berlingeri's Vocals Are Featured On His Song "En Casita"
By Radhika Menon
Demi Lovato's New Song "29" Hints At Their Age Gap From Ex-Boyfriend Wilmer Valderrama
By Jake Viswanath
Kim Kardashian & Pete Davidson’s Relationship Timeline From Start To Finish
By Jordyn Tilchen and Bustle Editors
Get Even More From Bustle — Sign Up For The Newsletter