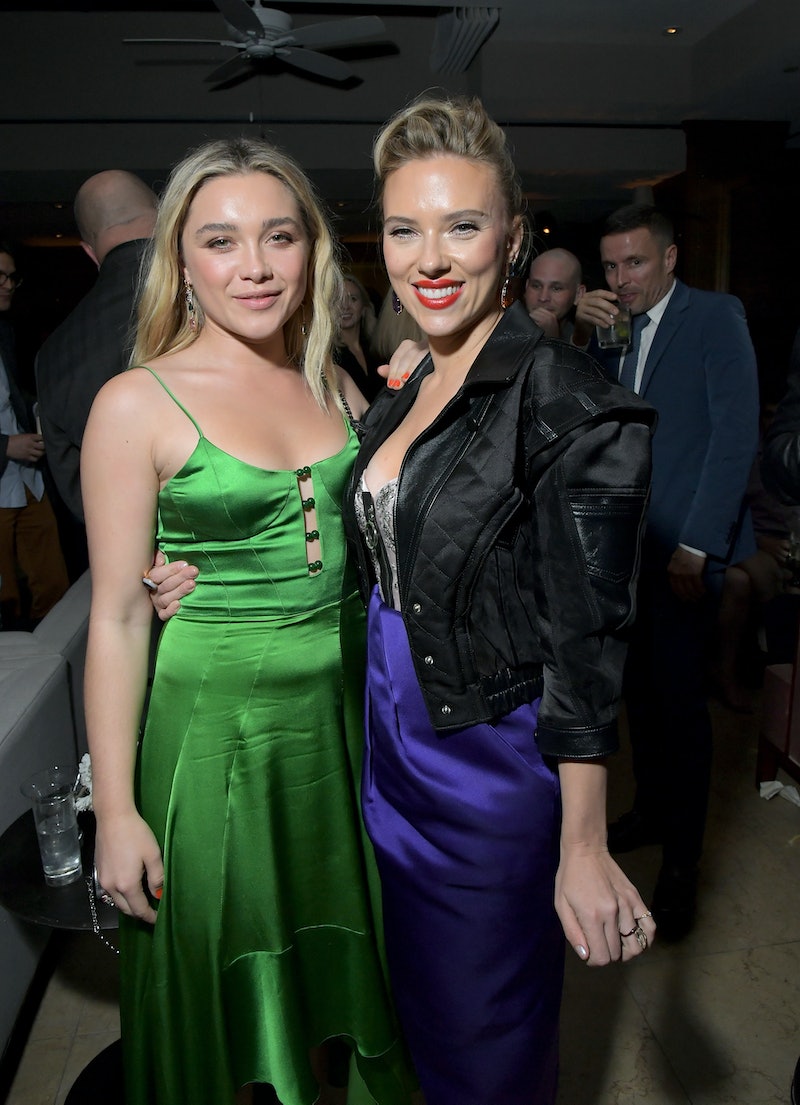 Natasha Romanoff may not have survived the events of Avengers: Endgame (RIP), but the hero known as Black Widow will continue to live on. During a recent interview with Empire magazine, Black Widow director Cate Shortland said Scarlett Johansson "hands the baton" to Florence Pugh in the upcoming superhero film, with the potential for Pugh to star in even more Marvel films going forward. But does that mean that Pugh will actually take on the title of Black Widow?

The movie — which will arrive in theaters Nov. 6, after being pushed from its original release date due to the ongoing coronavirus pandemic — will introduce fans to Pugh's character, Yelena, while delving more deeply into Natasha's life and backstory. "[Marvel Studios president Kevin Feige] realized that the audience would expect an origin story so, of course, we went in the opposite direction,” Shortland told Empire in their upcoming July 9 issue, teasing the film which takes place long after Natasha has become Black Widow.

But just because Black Widow isn't Natasha's origin story doesn't mean it's not Yelena's. "And we didn’t know how great Florence Pugh would be. We knew she would be great, but we didn’t know how great," the director added. While Shortland didn't explicitly confirm that Yelena will become the new Black Widow, she did note that Johansson felt she was "handing [Pugh] the baton" on set. "So it’s going to propel another female storyline," she added.

Shortland also dished on how Black Widow would honor Natasha's tragic death on the planet Vormir in Endgame, even though it will take place before hand. "In Endgame, the fans were upset that Natasha did not have a funeral," Shortland said. "Whereas Scarlett, when I spoke to her about it, said 'Natasha wouldn’t have wanted a funeral. She’s too private, and anyway, people don’t really know who she is.'" Instead, the director added that she and Johansson saw Black Widow as a way to send off the character with one last big adventure. "What we did in this film was allow the ending to be the grief the individuals felt, rather than a big public outpouring. I think that’s a fitting ending for her."

Back in October, Johansson teased that Black Widow will tackle some "real, complicated stuff" as part of its quest to give Natasha both the backstory and the send-off that she deserves. "[She's] a character that has a lot of shame," the actor told USA Today at the time. "And maybe in some weird, roundabout way, maybe some of the feelings I had going into this were actually some of her unprocessed feelings that I got to work through while making this film."

A month later, Pugh added that Black Widow would be a special sendoff to Johansson's beloved character. "I know lots of people will be emotional about her because her character had such a hard ending but it was special learning from [Johansson], and she’s been doing this for like 10 years in those films,” she said, while chatting with Beanie Feldstein as part of Variety's "Actors on Actors" series. “For this to be her film was special. And I got to be there and see how she does stunts and lives it, and it’s so her."

If Pugh is going to be the new Black Widow, it's clear she learned from the very best.