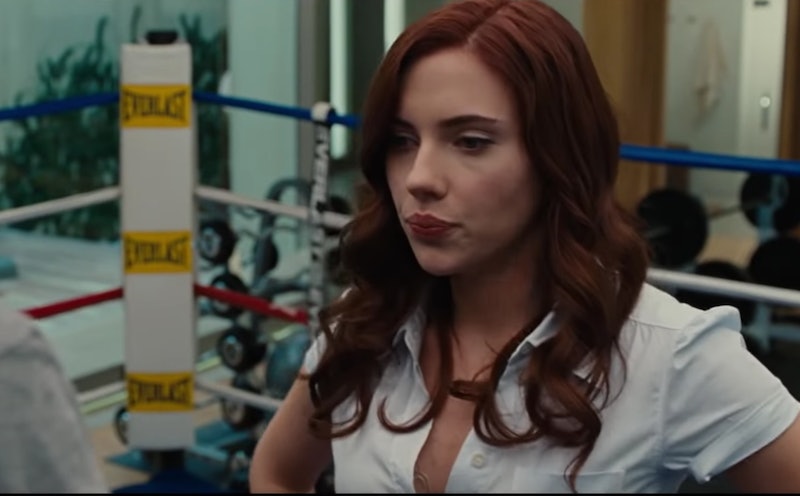 In the aftermath of Avengers: Endgame, some of the people behind-the-scenes have revealed how they made the big decisions for the film. Spoilers ahead for Avengers: Endgame. One of those big decisions in question was how Endgame portrayed Black Widow's (Scarlett Johansson) death. In fact, editors Jeffrey Ford and Matthew Schmidt just revealed that Black Widow's final Endgame scene was originally written very differently.

It turns out that what you see in Endgame is the product of a reshoot. "On script and what we first shot was an excellent scene," Schmidt said in an interview with Business Insider. In the film, fans watched Black Widow sacrifice herself to get the Soul Stone from the planet Vormir after an emotional scene with Hawkeye (Jeremy Renner). But, according to Schmidt, the original scene went something like this: "Thanos and his soldiers show up on Vormir and a small battle ensues between them and Natasha and Clint. Natasha decides to run off the cliff. Clint tries to stop her while also fending off the attack." Schmidt explained that they made the change after showing the first version to test audiences, even though they liked the scene. "We just came up with a better idea, something that serviced Natasha a little bit more," he said.

As you see in the film, the newer ending for Natasha shows a prolonged fight between Hawkeye and Black Widow as they argue over who should sacrifice themselves for the Soul Stone. And, it seems that the filmmakers thought it had more resonance, but was that a better idea? A lot of audience members were upset with Endgame's portrayal of Natasha's death, arguing that it nearly fridges the character who deserved a more significant sendoff.

Perhaps a better scene would have included an epic battle between Black Widow and Thanos (Josh Brolin). After all, Natasha Romanoff was one of the most consistently powerful superheroes throughout the MCU, despite not having superpowers. And she deserved to show off her epic ass-kicking skills one last time before making a heroic sacrifice.

Natasha's death wasn't the only scene of the character's that was changed from Endgame's original screenplay. In a recent interview with Slate's podcast, The Gist, the film's fraternal directing duo Joe and Anthony Russo revealed that Black Widow had a different storyline in Endgame that also was cut. "I believe at one point really early in development, Black Widow was actually leading the organization in D.C. that was in charge of orphans [left after Infinity War], basically. That was what she was heading up five years later," Anthony said.

Most Black Widow stans who argue that she's the strongest Avenger would probably agree that Endgame could have shown much greater appreciation for Johansson's character, and including a whole subplot about her own initiative to help the children left parentless following Thanos' destructive snap in Endgame could have provided that. Then again, the final cut of Endgame shows Black Widow basically singlehandedly leading the Avengers and keeping track of where everyone is in the post-snap world, so at least there's that.

Hopefully, for fans who were disappointed by Endgame's treatment of Natasha Romanoff's death, the forthcoming (and still not officially confirmed) standalone Black Widow MCU film could rectify things for the former Russian spy. Still, the plan for the future of Black Widow is largely unknown, so Endgame's goodbye to the character will have to do for now.

More like this
Nicola Coughlan Shared A Lady Whistledown Excerpt From ‘Bridgerton’ Season 3
By Grace Wehniainen, Alyssa Lapid and Sam Ramsden
Zendaya Shares Intimate Photo With Tom Holland To Wish Him A Happy Birthday
By Bustle Editors
The First 'Percy Jackson & The Olympians' Teaser Comes With An Ominous Warning
By Grace Wehniainen
The New Bachelor Will Be Announced Next Week & Here Are The Top Contenders
By Grace Wehniainen
Get Even More From Bustle — Sign Up For The Newsletter