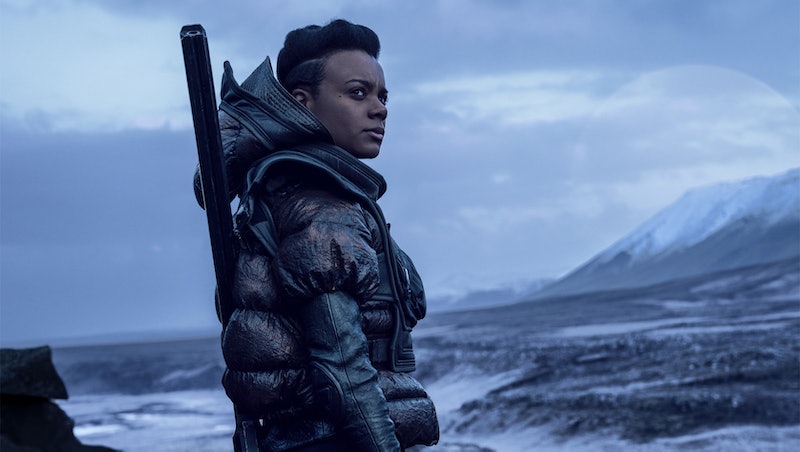 Apple TV+’s new show, Foundation, is a tour-de-force of world-building, full of arresting special effects and all-too-human drama. In short, it could be compared to Game of Thrones, but set 12,000 years in the future. And also in space.

Somehow, showrunners David S. Goyer and Josh Friedman managed to wrestle Isaac Asimov’s expansive, millennia-spanning sci-fi series into a TV-ready narrative. At its center is a group of exiles on a quest to preserve humanity’s knowledge and history, before their interstellar kingdom — lead by a domineering Lee Pace as “Empire” — collapses under its own weight. From the start, the series was an ambitious project; it reportedly cost a hefty $45 million to produce. Throw in a global pandemic and domino-effect of filming delays, and the already colossal television series became increasingly difficult to wrangle.

“I'd call my wife from the side of a mountain in Iceland or from the middle of a dust storm in the Canary Islands and just say 'What have I done?'” Goyer told BBC Culture about filming Foundation. “I had to try to root everyone in emotion because we filmed it all out of order. We might be filming a scene when the preceding scene had literally been filmed 14 months ago in another country, so you have to remind everyone where they are emotionally.”

In order to capture a wide range of alien worlds — and to finish filming — production moved across Europe and beyond. From Iceland to Ireland, below is a breakdown of every Foundation filming location.

Foundation was in the midst of filming in Ireland when production was shut down in March 2020 amid COVID-19 lockdowns. (Principal production resumed several months later, in October of that year.) The show utilized several locales across the country, including Dublin’s Trinity College, and both Troy Studios and the National Technology Park in Limerick.

Originally, only a small handful of scenes were set to be shot in Malta. But when strict filming protocols were initiated in the UK, Goyer told the Maltese press that the production decided to “expand their footprint” in the country. (The cast and crew received special permission from the Maltese government to film on the island for two months in early 2021.) Parts of the series were filmed in the town of Kalkara, as well as in Fort Manoel. Foundation also used Malta Film Studios’ facilities, including its two outdoor water tanks, which are among the largest in the world. The tanks were reportedly used to film scenes set on a water-covered planet — likely Gaal Dornick (Lou Llobell)’s home world.

Filming also took place in Reykjavik, Iceland’s capital city. In recent years, the Northern European nation has been a favorite for Hollywood, with the likes of Games of Thrones, Black Mirror, Die Another Day all shooting there.

Several exterior shots were also staged in Berlin, Germany, though it hasn’t been reported where exactly the production filmed — or how the scenes fit into Foundation’s story.

More like this
The Plane Crash In 'Dear Edward' Is Based On A 2010 Tragedy
By Grace Wehniainen
Stephen Graham & Steve McQueen Are Working On A Wartime Drama
By Darshita Goyal
'The Last Of Us' Video Game Revealed Tess’ Fate In The HBO Series
By Brad Witter
A 'Terminal List' Sequel & Spinoff Are Reportedly In The Works
By Kadin Burnett and Grace Wehniainen
Get Even More From Bustle — Sign Up For The Newsletter
From hair trends to relationship advice, our daily newsletter has everything you need to sound like a person who’s on TikTok, even if you aren’t.