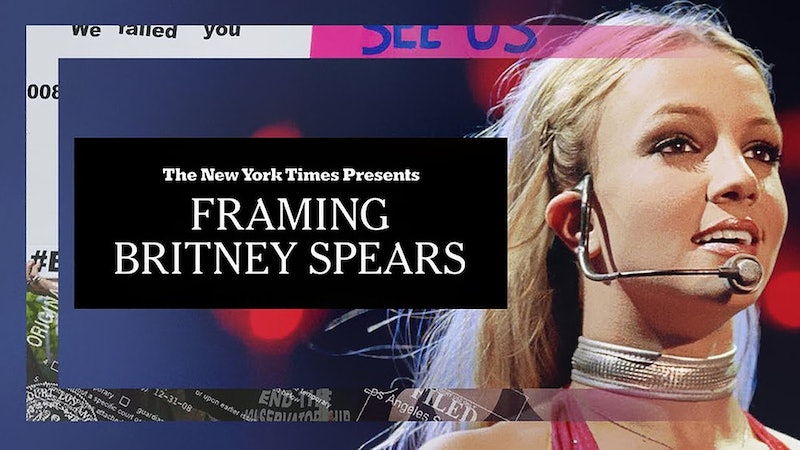 Even the Emmys want to free Britney Spears. Hulu’s New York Times film Framing Britney Spears was nominated for two Emmy Awards on July 13 in the categories of Outstanding Documentary Or Nonfiction Special and Outstanding Picture Editing For A Nonfiction Program. The Television Academy’s recognition of the documentary, which covers Spears’ controversial conservatorship and experiences with the media and started a cultural firestorm recognizing how famous women were treated by the public, makes it clear that the fight to #FreeBritney is resonating with the entire entertainment industry.

Director Samantha Stark tells Bustle immediately after learning of the nominations that she was having mixed feelings about the Emmys news, acknowledging that “it felt wonderful to be recognized” but remorseful that Spears couldn’t share in their joy. “I’ve been thinking a lot about how the person who could tell her story best is Britney,” she says. “And while this is happening, there’s so much going on in the court, and it seems like so much Britney wants to say.”

Indeed, on June 23, months after Framing Britney premiered on Hulu and FX, Spears spoke out against her conservatorship in court, confirming many fears that were outlined in the film. In her testimony, Spears alleged that she was held in a mental health facility against her will in 2019, compared her conservator, father Jamie Spears, to a sex trafficker, and said she was forced to wear an IUD that prevents her from getting pregnant under her conservatorship. For the first time, fans heard from the singer’s own mouth that she would like the conservatorship to end for good, which she has reportedly advocated for as far back as 2014, according to a June 22 report from NYT. “I just want my life back,” she said. “It’s been 13 years and it’s enough.”

Executive producer and NYT senior story editor Liz Day is “grateful and humbled” by the noms, but wants to keep the focus on Spears’ case itself, especially given that the next court hearing on her conservatorship is just one day after Emmy nominations morning. “She’s still fighting for basic rights, like trying to be able to pick her own lawyer,” she notes to Bustle.

Spears did not participate in the doc, and the film’s ending clarifies that it’s not known if she even received their request for comment. But before she finally spoke, Framing Britney told her story to a worldwide audience who had no clue what the singer was going through behind closed doors.

“The thing that we were so surprised about with the documentary is what a cultural reckoning it pushed and how many conversations it sparked with people all over the world,” Stark explains. “I was doing interviews via Zoom in India. It felt surprising. So many people wanted to talk about this because the film was really about us, our culture, and how we treated Britney, because, you know, we didn’t want to put anything inside Britney’s head.”

“The surprising thing about this is Britney alleged abuse in her speech ... There was all these very specific things, and it doesn’t appear like there’s anything in the system to immediately investigate that.”

Although she didn’t speak in Framing Britney herself, Spears did reportedly react to the doc on Instagram, explaining in a post shared on March 30 that she hadn’t seen the entire film but felt “embarrassed” by the light it put her in. However, fans have questioned whether Spears controls her Instagram, and therefore, if that caption was actually written by the singer herself. Stark thinks it’s impossible to know whether or not Spears is truly in charge of her own posts as of now, and takes caution when reporting on her famous Instagram.

“It’s surprising to me is how many reputable media outlets cover Britney's Instagram as if they heard her stay it themselves, and they just say Britney posted this,” she explains. “[At] The New York Times, we won’t say that because she did not say that to us in person or over a video chat in real life. We say ‘in a post, in something posted to her Instagram.’ And that’s not because we decided to change our minds because the Instagram said something critical of us. It’s just journalism. You wouldn’t say it was her, if you don't know if it’s her, because we don’t want to mislead the public. There’s been so much misinformation about Britney.”

While the Emmy noms are a monumental recognition of Spears’ fight to be freed from her conservatorship, there’s still much more work to be done. Stark and Day continue to help by reporting on Spears for NYT, and Day is specifically focused on what will happen during Spears’ next hearing. “Not much has really changed for Britney in court,” she says. “Her dad is still in charge of her money, which she’s been fighting for a year now. She’s still paying for the lawyers on all sides ... and we’ll see [July 14] if she has the ability to hire her own lawyer, which is kind of step one in any legal situation. So I think it’s just really important to keep the focus on Britney’s case and making sure that there’s not too much distraction.”

“It’s just really important to keep the focus on Britney’s case and making sure that there’s not too much distraction.”

The reporters are also doing research to see if there’s enough material for a follow-up documentary. Should a sequel be given the green light, Stark is particularly interested in other figures involved in the conservatorship. While she didn’t mention any names, #FreeBritney advocates are really questioning the roles of Spears’ former manager Larry Rudolph and lawyer Samuel D. Ingham III, both of whom recently stepped down from the Spears’ team. As for Day, she wants to uncover who actually profits from the conservatorship.

“I’m interested in everybody,” Stark emphasizes. “The surprising thing about this is Britney alleged abuse in her speech ... There was all these very specific things, and it doesn’t appear like there’s anything in the system to immediately investigate that because it was really surprising that now it’s weeks later and nothing’s happened. So I want to know, who are the players there and why is that not happening? How are there so many people involved and there’s so much silence around it?”

These are answers every fan would love to know.