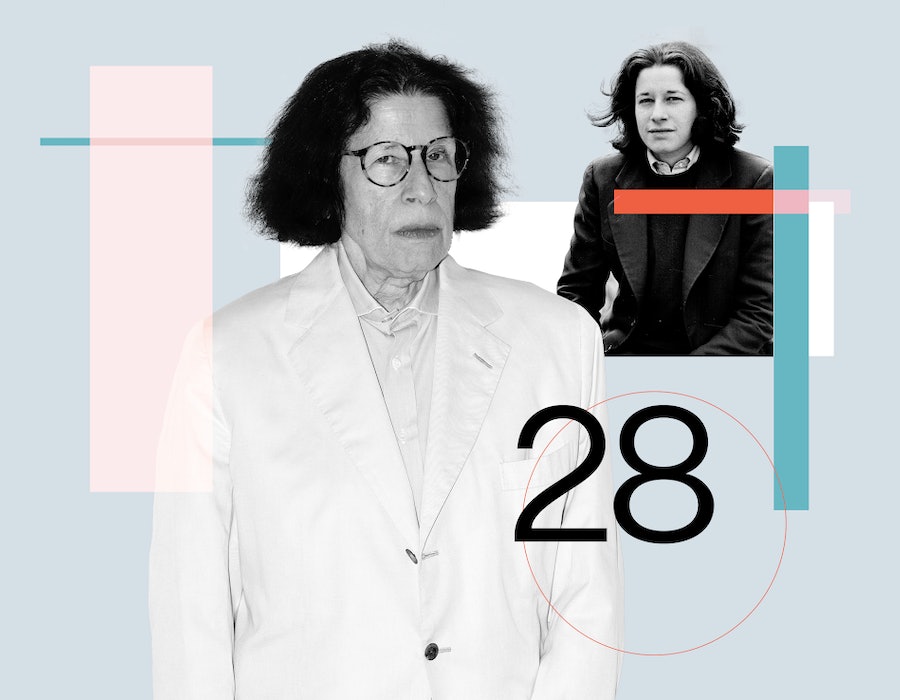 In Bustle’s Q&A series 28, successful women describe exactly what their lives looked like when they were 28 — what they wore, where they worked, what stressed them out most, and what, if anything, they would do differently. This time, Fran Lebowitz discusses Pretend It's a City and New York nightlife in the '70s.

It's impossible not to laugh along with Fran Lebowitz. Just ask Martin Scorsese, whose chuckle is so omnipresent throughout his new docuseries Pretend It's a City that it becomes the show's de facto laugh track. Part love letter to New York, part crotchety letter to the editor, the Netflix series follows the famously surly and sardonic Lebowitz as she skewers everything from urbanites carrying yoga mats, to people who ask for directions, to Times Square's entire existence. Through seven episodes, Scorsese laughs so freely at each of Lebowitz's witticisms that meme-ing the amused director has become Twitter's latest wholesome pastime.

Lebowitz's curmudgeonly opinions have entertained audiences ever since she published her first book Metropolitan Life at 28. The collection was not unlike Pretend It's a City — full of essays regaling readers with her misgivings on urban dwelling —but the book was a hit with readers far outside of New York City. "It was like a movie. In one minute I was in this life, the next minute, [I had] a completely different life," Lebowitz tells Bustle of how the book catapulted her from a beloved Interview columnist to a nationally renowned author. "28 was definitely a good year for me. I would recommend for [all] people who are turning 28 to publish a bestseller."

In the intervening years, the 70-year-old's productivity has waned as she's become nearly as well known for her writer's block as she is for her written work. "It was always hard to write. I think I was just younger, more driven, and more energetic [in my 20s]," Lebowitz explains. "I’ve always been lazy, so as soon as I could be lazier, I took it." Below, Leibowitz reflects on walking around New York barefoot, being a lounge lizard, and why Metropolitan Life almost never saw the light of day.

My first book came out and [my life] became different in literally one day. I have to stress to you how important the New York Times was then. The New York Times was the most important publication in the entire world, and I had two rave reviews in it in the same week. John Leonard was the main daily reviewer for the Times. He could make or break your life on one page and he literally changed my life.

Did you have any sense that the book would be such a success?

No, that would have been ludicrous. In fact, my original editor had been fired before the book came out — [it had] nothing to do with me. Usually when that happened to someone like me — a first-time author — that book wouldn’t even be published. But there was a man named Henry Robbins who was the head of the [publishing] house at the time. I’d come to know him from hanging around the publisher’s office because there was heat there and my apartment was so freezing. So he said, “I’ll take the book.” The fact that Henry had this book is the reason the book got [the press] it got. It wouldn't have [been as successful] otherwise.

It all comes back to heat with you. In Pretend It's a City you also mention asking people if they had heat before going home with them in your 20s.

I wouldn't say it was the only factor, but it was definitely a factor. It was something I would always ask [suitors]. "Do you have heat?” And lots of times people say, "Heat? No. Who has heat?”

You also revealed that you used to walk around New York City barefoot.

I was 20 [when I did that], I wasn't in my late 20s. I have to say that in retrospect, that is without question the craziest and dumbest thing I did when I was young. There's no defense. And let me assure you, New York was filthy then. I mean, it's pretty dirty again now because Bill de Blasio stopped picking up the trash, but it's a testament to what an incredible immune system I must've had that I didn't drop dead from that.

Did you splurge on anything to celebrate becoming a bestseller?

I bought everything. I bought a car right away, this kind of taxi cab called a Checker, which really startled almost everyone I knew. The reason people found this astounding is because who needs a car in New York? No one. And who wants a car in New York? Almost no one. But I happen to love cars. If I had lots of money, I'd have 50 cars. I still own the car.

When I bought the car I drove it everywhere, but I was also very young and very promiscuous and I was always sleeping in different places. A friend of mine said, "Do not drive that car all over town and leave it in front of different buildings, because everyone knows that's your car." I said, "That’s ridiculous." Then one morning I came out of someone's apartment and there was a note under my windshield from a friend of mine who lived in that neighborhood. The note said, "What are you doing in this neighborhood?"

You’ve frequently described yourself as a “lounge lizard.” What did a Friday night out look like for you at the time?

I was out every night, all night from the time I was like 19 or 20 until I was in my early 30s. Ten or 12 years of nonstop staying out all night is efficient. It’s not exactly a thing you can do your entire life — I guess you can, but you shouldn’t. Most of the places I went to were illegal. Because first of all, it was illegal to be gay then so it was illegal to dance with someone of your own gender. So a lot of them were private clubs. You had to belong to get in. I never belonged [to any clubs] until my first book came out, because I didn’t have any money. But I either knew the people running it or a friend of mine would take me.

There was not a lot of alcohol sold in most of these places because with most of the people that I knew it was not fashionable to drink, it was fashionable to take drugs. So there was a tremendous amount of drug-taking, that’s for sure. And these places would not only be open all night, but people would arrive there at 10:00 AM [having come from] 10 other places. Not me particularly, but [others].

What was your style like at the time? Had you already nailed down your signature look?

When I was young, I always wore sweaters. I wore crew neck sweaters and then probably in my early 30s I thought, "You know what, you're too old for this." But I always wore blue jeans. The main difference now is that I have my clothes made. Not my blue jeans, but my jackets and suits. So the clothes are better now, obviously, but they’re the same idea.

Were you as opinionated at 28 as you are now?

I was as opinionated at eight as I am now.

More like this
Here’s Everything Coming To & Leaving Netflix In August
By Jake Viswanath
Neil Patrick Harris’ 'Uncoupled' Character Will Make A Life-Changing Decision In A Potential Season 2
By Brad Witter
At 28, Tisha Campbell Was Newly Married & Dancing Through A Career Pivot
By Grace Wehniainen
At 14, Melissa Barrera Was Planning Her Quinceañera & Falling In Love With Musical Theater
By Gabrielle Bondi
Get Even More From Bustle — Sign Up For The Newsletter