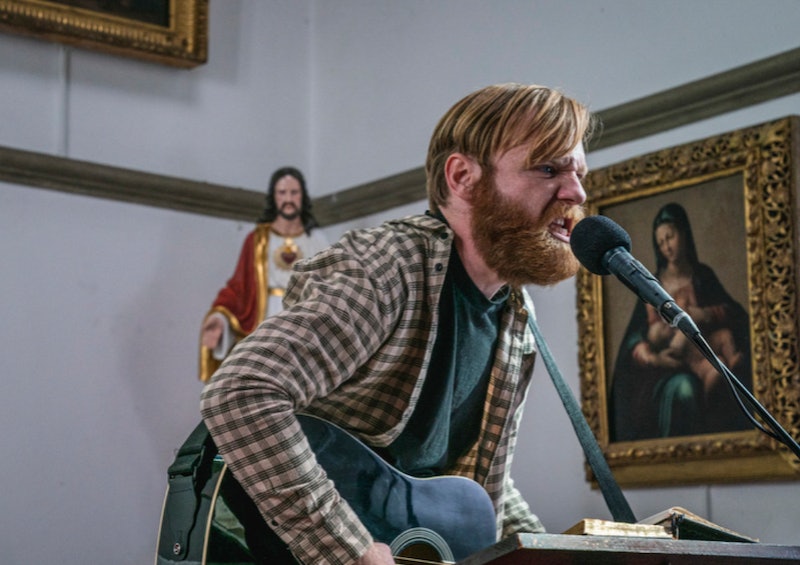 The titular Frank Marron is a 32-year-old catastrophe who by day roams the streets of suburban Dublin causing accidental havoc and by night still sleeps in his childhood home. His tale of arrested development is a well-worn TV trope, but Frank Marron from Frank of Ireland is a pure original, invented by actor Domhnall Gleeson, his brother Brian Gleeson, and their writing partner Michael Moloney out of thin air.

Which isn’t to say the character was invented overnight. The Gleesons have spent a few years working on their new sitcom from Amazon Studios and Channel 4, tinkering with character arcs and the series’ big set pieces. But the germ of the idea for the character Frank is even older than that, Domhnall Gleeson recently told The Guardian.

Domhnall started making home movies with Moloney when the pair were kids; they’ve worked on sketch scripts together ever since. Most of those movies were based on the world they saw around them growing up in Dublin. So when the trio was searching for the thread of Frank of Ireland, they did the same, walking the familiar streets and thinking about their misspent youth, making “bad” monster movies, according to Moloney, and going to McDonald’s. Over the years, the group evolved a country singer character who they even composed songs for. “We called him Duke Governs,” Domhnall told the paper. “And he led on to parts of Frank.”

It seems fitting that the man-child at the center of Frank of Ireland is the product of three writers who grew up together and rehashed those memories in the search of a script. Despite his age, Frank moves through the outskirts of the big city with little responsibility and uses swear words like he just heard them on the playground. He’s also inspired by the films the Gleesons watched when they were young. "It is a physical, slapstick and ... we were talking references earlier — if you grew up watching Jim Carrey in Dumb and Dumber, I think that element of it is important to us and is definitely there," Brian told the Irish Examiner.

But the strength of that comparison ends at slapstick. Jim Carrey’s Lloyd Christmas was disaster-prone, much like Frank, but ultimately incredibly well-meaning. Frank Marron? Not so much. Perhaps Domhnall explained the character best: a “13-year-old personality that's never grown up because he's too comfortable in life and has a temper and expects the world to do him favors."

More like this
Everything To Know About 'The Peripheral's Potential Season 2
By Brad Witter
Lib & Will’s Romance In 'The Wonder' Is Very Different From The Book
By Sam Ramsden
The First Trailer For 'That '90s Show' Includes So Many Nods To The Original Series
By Jack Irvin, Alyssa Lapid and Grace Wehniainen
Elizabeth Debicki On Her Approach To The Most Debated Scene From 'The Crown'
By Grace Wehniainen
Get Even More From Bustle — Sign Up For The Newsletter