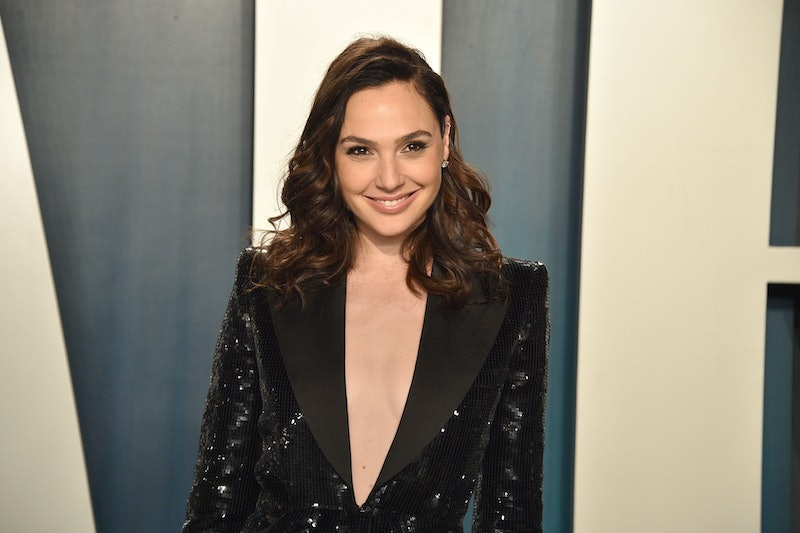 Even the best intentions can't protect you from criticism — just ask Gal Gadot. During a recent interview, Gal Gadot opened up about the backlash to her "Imagine" video, and the Wonder Woman star admitted that she understands why people may have felt that the video was tone deaf. Back in March, as the United States was headed into lockdown, Gadot and several of her famous friends — including Kristen Wiig, Jamie Dornan, Amy Adams, and Will Ferrell — recorded themselves singing John Lennon's "Imagine" as a gesture of support to everyone in isolation.

"We are in this together, we will get through it together. Let’s imagine together," Gadot wrote on Instagram, encouraging her followers to "sing with us. All love to you, from me and my dear friends." However, their message of love wasn't particularly well received by social media, as many people took issue with celebrities singing lines like "imagine no possessions" while others around the world were losing their jobs.

While speaking with VF, Gadot acknowledged that her gesture of good will wasn't what people needed in that moment. "Sometimes, you know, you try and do a good deed and it’s just not the right good deed," she explained. "I had nothing but good intentions and it came from the best place, and I just wanted to send light and love to the world."

"I started with a few friends, and then I spoke to Kristen [Wiig]," she continued, explaining how the video came about. "Kristen is like the mayor of Hollywood. Everyone loves her, and she brought a bunch of people to the game." However, Gadot takes full responsibility for the video falling flat upon it's release. "But yeah, I started it, and I can only say that I meant to do something good and pure, and it didn’t transcend," she said.

Back in April, Dornan confirmed that it was Wiig who recruited him for the video during an appearance on comedian Shane Todd’s podcast Tea With Me. "Kristen and I did a movie together last summer that’s meant to be coming out on July 31 but who knows what will happen," Dornan recounted. "I would do anything for her — that’s how highly I think of her. Kristen texted, ‘Gal and I are trying to organize this thing to lift spirits.’ So I was like, ‘Of course I’ll do it.’" After the video was widely criticized, however, Dornan revealed that Wiig apologized for getting him involved: "Then she texted days later saying, ‘Sorry.'"

Despite defending Gadot at the time, explaining that she was "trying to do a good thing," Dornan admitted that he completely understood the criticism — and actually somewhat agreed with it. "I literally did mine in the toilet of my house. Quite clearly, some people had escaped to their second home," he said. "There’s too much acreage in the background… clearly in front of an ocean. I was quite aware of that whenever I was doing it to make it normal."

The "Imagine" video wasn't just criticized by social media users and people affected by the coronavirus pandemic — there were also quite a few celebrities who shared a few spoofs of the clip. On March 19, The Daily Show's Trevor Noah shared a video of himself "serenading" New York City from his balcony; after he sings "imagine all the people," a voice shouts back, "Imagine you shut the f*ck up!" A few days later, John Mayer shared his own version on Instagram, although he sang Ariana Grande's "Imagine," rather than John Lennon's. He admitted in his caption it was "A simple misunderstanding."

More like this
Rihanna Shares Video Of 'Black Panther 2' Filmmakers' First Reaction To “Lift Me Up”
By Radhika Menon
Austin Butler Recalls Lisa Marie Presley Showing Him Elvis’ Bedroom
By Jake Viswanath
You’ll Definitely Recognise Isadóra Bjarkardóttir Barney’s Mum
By Maxine Harrison
Lisa Marie Presley's Secret Granddaughter Was Revealed At Her Funeral Out Of Nowhere
By Jake Viswanath
Get Even More From Bustle — Sign Up For The Newsletter
From hair trends to relationship advice, our daily newsletter has everything you need to sound like a person who’s on TikTok, even if you aren’t.