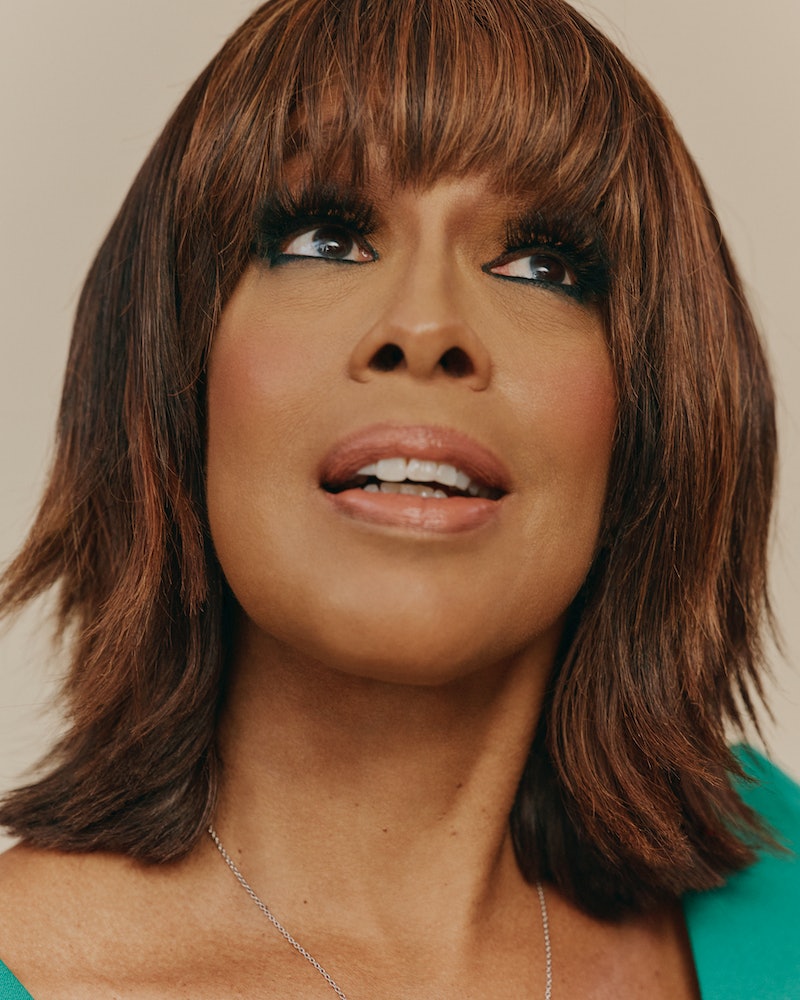 Gayle King meets me on the 31st floor of the ViacomCBS building in the center of Manhattan. It’s uncharted territory for the longtime TV personality, and she’s still exploring the new digs. In September, the rebranded CBS Mornings found a new home in Times Square after spending nearly a decade farther uptown. Wide-eyed, she marvels at the midtown Manhattan skyline through the building’s floor-to-ceiling windows and at an unopened cheeseburger eatery down the hall. “I feel invigorated from the time I pull down 44th Street,” she tells me, sounding almost like a tourist.

Then King, her emblematic bob, and a pair of purple-and-green leopard-print pumps enter the Bustle photo shoot.

Connecting comes easy to King. In the conference room where she’s being photographed for Bustle, she floats from person to person, offering introductory handshakes and deliberate eye contact. She solicits burger recommendations from the photo assistant, and bonds with the photographer about the alarming invasiveness of C-sections. When I introduce myself, she tells me that my name was on “favorite daughter Kirby's” baby name list. (King became a grandmother in September; she shares her daughter and son, Will, with ex-husband William Bumpus.)

Anecdotes and introductions aside, we breeze through the shoot. King knows where to hold her head, how to fold her arms, how to smile consistently without looking insincere (her tip: say “yay!”). She is prepared and amenable — she walks in wearing the photogenic pumps, then reveals she brought another three pairs of shoes just to be safe — but when the photographer suggests that she take off her purple bracelet, King politely declines. The rubber lilac band was gifted by the parents of Bakari Henderson, a young Black man who was beaten to death in 2017 by a mob of white men in Greece. She’s still close to Henderson’s family, whom she interviewed four years ago. She’s still close with some of the parents from the Newtown school shooting of 2012. She’s still close with many former interviewees. Gayle King doesn’t just build relationships: She plants them, tends to them, and waters the roots, if you will.

The morning we speak is the day after R. Kelly was found guilty on nine charges, including racketeering and sex trafficking, a long overdue conclusion to over 25 years of criminal allegations made against him by predominantly Black women. King’s immediate reaction to the verdict? “Justice. That’s what I thought,” she says. “The judge said some of the evidence was so disgusting and despicable that they wouldn't even allow it to be played in court,” says King, who was privy to the documentation. “Let's just say part of the evidence involved feces. Let's just say that. It was so stomach-churning.”

Back in March 2019, King’s explosive interview with Kelly immediately went viral, specifically one photo. The singer stands over her, physically reacting to one of her questions. He is emotional, with his arm raised, towering over King, who remained seated, upright, unmoved.

The day of her interview, she also spoke with some of the survivors, including Azriel Clary. “My heart aches for them because I know how painful this has been,” King says. “To us, this is a news story, but for them, this is life. And I feel sorry that for so many women, it took this long.” After the verdict was announced, she checked in on Clary, as well as dream hampton, the executive producer of the Lifetime documentary Surviving R. Kelly, because as we know, that is who she is.

Kelly’s trial was always going to be a big news story, and after more than 40 years in the industry, King can usually sense these things. But sometimes they still surprise her. Like in January, when she sat down with Miya Ponsetto, who had wrongly accused a 14-year-old Black boy of theft, and then verbally and physically attacked him. King describes the story as a bit “cuckoo for Cocoa Puffs,” and didn’t expect her follow-up interview with Ponsetto to make headlines of its own. But then Ponsetto, who was famously nicknamed SoHo Karen, not only continuously interrupted King but put her hand up mid-interview, and said, “Alright, Gayle, enough.” The camera was rolling. The disrespect was heard round the World Wide Web.

“Choices,” I say to her. “Choices,” she echoes back in confirmation.

King has reported on most national breaking stories from the last couple of years. “The Gabby Petito story was difficult. The R. Kelly story was difficult,” she says. “Whenever there’s a mass shooting, that’s difficult. You know, Black men being killed by police is very difficult. The vitriol in politics is difficult. Actually, there are a lot of difficult moments.” But wait, there’s more. COVID-19. Vaccines. The impeachment. The election. All the racial reckonings. Billionaires trying to colonize the moon. Afghanistan. Wildfires from Australia to California.

“I love my job, and sometimes the news is difficult,” she says. “But I’m glad that I get to be the one to bring it to you. And hopefully, we can navigate it and get through it together.”

When I ask her what she does for herself when it’s all too much, she doesn’t have a clear answer. There’s no immediate reply like meditation apps or bubble baths or logging off. Not even a shot of tequila. (King famously doesn’t drink alcohol.) “I think maybe I’m good at compartmentalizing,” she says. “I don’t know, because I try not to take it home, but again, I’m not a robot. So sometimes it does get to you.”

Regardless, when it’s all too much for us, she shows up.

​​King has been with CBS for nearly a decade. “I sort of feel like the last man standing here,” she says of the morning show’s rebrand. She’s watched co-anchors come and go, some more gracefully than others, and has weathered the network’s occasional turbulence. “I still feel that there’s always something for me to learn, even now. I’m always trying to figure out how to be better,” she says. “I’m sitting here talking to you at 66. Walter Cronkite had to retire at 65. Just think about that for a second.”

Part of the network’s plan to reel in a bigger audience? Nate Burleson, former NFL wide receiver and CBS Sports analyst, who joined King and Tony Dokoupil as the show’s third co-host for its September relaunch.

“As soon as she walks on set, all the heads pop up,” says Burleson of King. “She can give you the morning news and also walk right off set and onto a red carpet. That right there? That’s swagger. She is the definition of Black excellence.”

Truly, she has the range: the ’fits, the work ethic, the charm, the empathy, and lest we forget, Gayle King is fun.

In September, she did a segment with the Brooklyn-based designer Telfar Clemens, the creator of the sought-after vegan leather tote bag, which has been nicknamed the “Bushwick Birkin” and is worn by everyone from AOC to your local barista. She tried on a pair of Telfar’s “thigh hole” jeans, and sent a photo of herself to her son, Will, who texted back, saying, “That's an awful lot of thigh.” A few months prior, she shared a post-gym photo of herself on social media, in which her underwear was peeking out. Her daughter texted her, asking, "Are you sure you want to put that up?" In both cases, yes, she did.

“I just don’t take myself so seriously,” she says now, laughing. “And I don’t think that hurts me as a journalist.”

But even with her network’s revival, her return to radio, and a full-time job at O, The Oprah Magazine, her new grandson still takes the front seat. Her daily alarm clock remains set at 3:24 a.m. — yes, you read that right — her plate remains incredibly full, and she still manages to fly back and forth from New York to Los Angeles to see little Luca.

I ask King if she’s picked a grandmother name yet. “Grandma” just doesn’t feel right to her, she says. For the past month, she’s been testing out Gaea, an ancient Greek mother goddess who personifies the earth. As celestial as it sounds, not everyone is biting. “Oprah says it’s pretentious. Favorite daughter Kirby says, ‘I think it's a little extra,’” King says, laughing. Even a random, unknown woman approached her on the streets of New York City to say she didn’t like the name. She shook it off, laughed, and stuck with it. “I like the sentiment of Mother Earth,” she says. “And I wanted something that sort of sounded like Gayle. Somebody suggested Glamma to me. That really felt extra.”

Thirty-five years ago, King put a lot of thought into Kirby’s name, and more recently, she spent over a year-and-a-half brainstorming options for Kirby’s first kid. Because a name matters, whether it’s given or chosen, whether you go by a mononym or pseudonym. A name can even indicate whether you act like an entitled white woman. “I remember asking my mom, ‘Did you guys give any thought to the name Gayle?’” she says. Her mom hadn’t, she learned, but liked how it sounded. Upset at the memory, she says, “But it just sounds so... Gayle King? I mean, I don’t know.”

I laugh and don’t know how to tell her, but, uh, it’s a pretty big name now. She looks at me with an all-knowing smile, “Yeah, it worked out OK.”