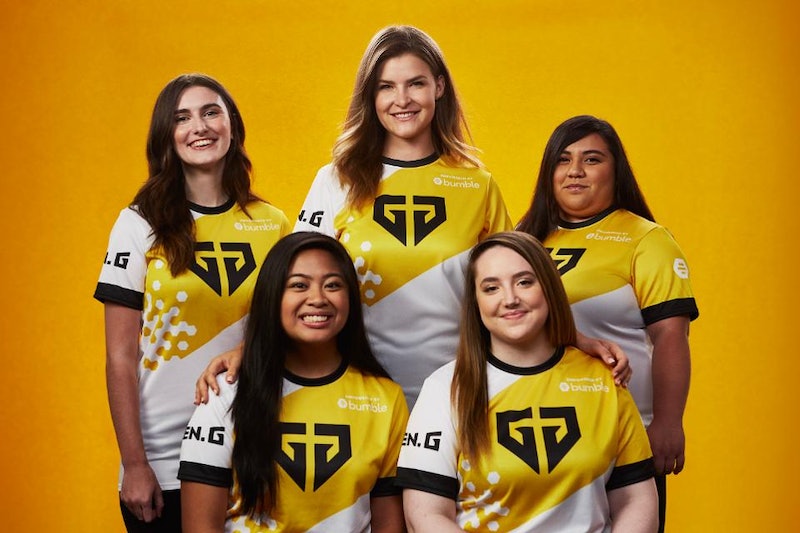 Streaming has become one of the most integral parts of the video game industry, and for a long time was dominated by one service: Twitch. But, as we've seen with TV streaming services, Twitch now has its fair share of competition from the likes of Discord, Mixer, and Caffeine. Gen. G, one of the world's leading esports organisations, has had a major presence on Twitch. But that's about to change with one of their rosters, as Gen. G's all-female Fortnite team has partnered with Caffeine to stream their content.

Formed by Gen. G and Bumble in October 2019, Team Bumble consists of Madison Mann (maddiesuun), Tina Perez (TINARES), Carlee Gress (Carlee), and Hannah Reyes (hannahfn), who will be streaming their Fortnite gameplay on Caffeine, as well as "a wide range of topics dedicated to empowering women in gaming including health and wellness and competitive gaming," a press statement sent to Bustle reads.

Speaking about the Caffeine initiative, Mann tells me: "I’m excited to be able to expand our audience and connect for with the female gaming community that is hungry for content that speaks to them – the female gaming community is constantly growing, and there should be more people who can speak specifically to that. In addition to our Fortnite streams, we are looking forward to talking more openly about health, wellness, and competitive gaming in a new way!"

Team Bumble's partnership with Caffeine will also provide players (and viewers) with a safe, inclusive space supported by a "multi-level moderation scheme" with "automated filtering with human moderators and an empowered community" to ensure that the service is "safe and healthy." As Mann explains: "Caffeine has a zero-tolerance policy for bullying, hate speech and racism – working with them will give me (and my teammates) the opportunity to broadcast content in a safe space and create a community that supports inclusivity and diversity in gaming."

In recent years, gaming has moved from a male-dominated arena to a much more inclusive one. But as Perez pointed out to The Verge last summer, there's still a long way to go. "I want as many girls to compete as possible. We're all given the same opportunity for this, and I want everyone to capitalise on it," she said. "Part of the reason they don't is that women are afraid that they'll do bad, or don't feel like they're skilled enough, or that they'll be harassed. That's what we want to change."

According to a 2019 study from data firm Intercept, "women compromise 30% of esports viewership and 35% of esports gaming," which is notably being represented through players such as Mann. What advice does she have for female players new to Fortnite, and those who want to become streamers or play competitively, I ask? "Say f*ck it and go after what you want and just be yourself," Mann says. "While there can be a toxicity towards women in gaming, sometimes you just have to accept that you can’t change the opinion of internet trolls, and can’t let rude comments get to you. I’ve learned that the people I compete against and who come back every day to watch me play Fortnite don’t care what my hair looks like or my gender – they just care about my gameplay and humour."

More like this
This Is When Netflix Is Going To Start Charging You For Sharing Passwords
By Darshita Goyal
This Wordle Rival Is Taking Social Media By Storm
By Sam Ramsden
'Brookside' Is Coming Back & Soap Opera Fans Are Going Wild
By Sam Ramsden
Ashamed Of Your Screen Time Stats? Here's How To Change That
By Alexis Morillo
Get The Very Best Of Bustle/UK
Sign up for Bustle UK's twice-weekly newsletter, featuring the latest must-watch TV, moving personal stories, and expert advice on the hottest viral buys.