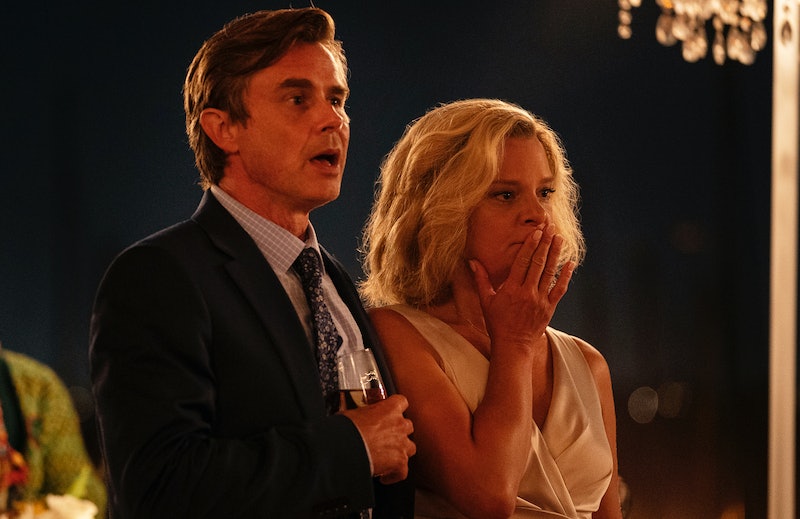 In Genera+ion’s fourth episode, Martha Plimpton’s Megan snaps. It’s a few days after her son Nathan (Uly Schlesinger) drunkenly confessed that he’s bisexual, and she’s at a PTA meeting discussing gluten-free cookies when the conversation takes a sudden turn. “There was a day when people were happy with cookies. Now it’s all, ‘Oh no, I identify as a sugar-hating fake celiac person, or whatever,” she scoffs. “So tedious. ‘Pay attention to me, the special allergic person, me.’ I’m sorry, but there was a time when people were just normal.”

It’s a startling (and undoubtedly homophobic) moment, but one that illuminates just how much Megan hates feeling like she’s losing any degree of control, particularly over the wholesome image she’s crafted of her family. “She's so committed to her organizational life, and she doesn't have a career of her own, per se, outside of raising these kids,” Plimpton tells Bustle. The prospect of Nathan and his twin Naomi (Chloe East) going off to college already has her “in a tailspin of anxiety and panic.” Finding out that Nathan is bisexual — which Megan views as him having “already left [her], in a way” — on top of that reveals how unequipped she is to deal with anything that doesn’t fit her limited conception of “normal.”

“I think this is a common problem people are having right now writ large in the culture,” Plimpton continues. Megan’s rant means that “her way of seeing the world has become irrelevant. And she cannot stand the fact that she's become irrelevant.” As younger generations become more comfortable exploring different identities and relationships, Plimpton says that adults like Megan feel increasingly like they don’t belong anymore.

“We're seeing a lot of adults who have a major problem with change. So Megan is speaking to that feeling, that panic, of being left behind,” Plimpton says. (This is smartly echoed by another pair of characters in the episode, when high schooler Chester tells guidance counselor Sam, “You’re the dinosaur. I’m the asteroid.”) Plimpton adds that these adults might not even think they’re being bigoted, but the fear of being schooled is such “an anathema” that it’s difficult for them to even step back and listen objectively.

While many of the characters in Genera+ion are based on real people who the co-creators — 19-year-old Zelda and her dad Daniel Barnz — have met in real life, Plimpton says that Megan is likely an “amalgamation” of several personalities that exist in the real world. “Megan is co-written by an adult, but she’s also fulfilling a young person’s concept of what this parenting issue is,” Plimpton explains.

She’s a difficult character, but Megan’s unwillingness to be vulnerable is meant to contrast against Nathan and Chester’s generation, whose open exploration of sexuality Megan belittles as attention-grabbing. “Megan is so desperately trying, and really failing, at compartmentalizing” Nathan’s coming out, Plimpton says. Though she makes a show of being friends with Patrick and Joe, two gay men, she refuses to even acknowledge Nathan’s sexuality to them. “He’s not [bisexual],” she says firmly when they ask. “I know my son.”

Plimpton says we’ll see “a slightly different side” of Megan in future episodes. And though she declines to reveal if Megan will ever embrace (or even acknowledge) Nathan’s sexuality, she says part of her character’s journey is needing to accept that. “Teenagers are supposed to be insane, and parents are supposed to not understand why they're insane,” Plimpton jokes. Ultimately, the onus of repairing the relationship is on the adult. “She's so resistant to even talk about it. That's where the disconnect is.”