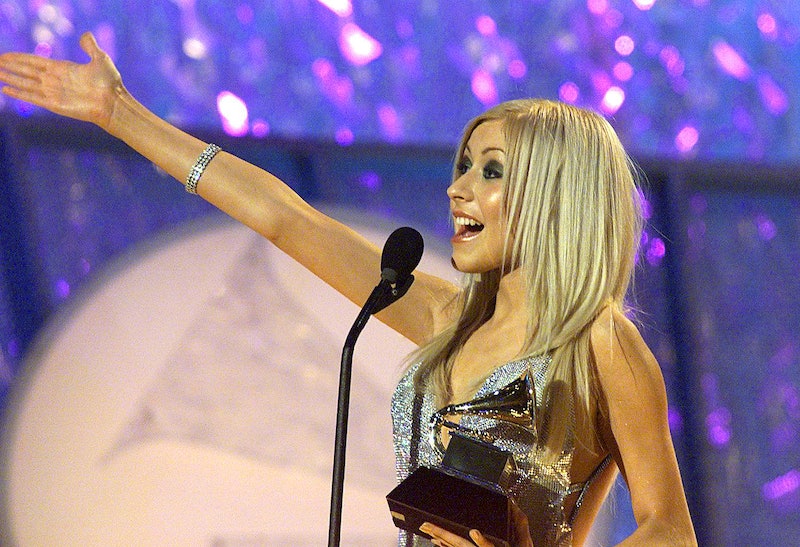 Christina Aguilera declared herself “Dirrty” back in 2002 with her sophomore album, Stripped, inspiring generations of influencers and next-gen popstars to liberate themselves however they choose (just ask Miley Cyrus and Kylie Jenner, both of whom have donned Aguilera’s *ssless chaps). However, the pop icon and should-be-Oscar-winner for her film Burlesque, was getting “dirrty” even before donning those chaps. The “Genie in a Bottle” lyrics that you were singing in 1999 may have caused your parents to ground you if they caught on to the song’s true meaning.

Aguilera’s debut single “Genie In A Bottle” — which almost had a different name — is often grouped in with the classic bubblegum-pop anthems from the late ’90s and early 2000s, but those hypnotic “oh, oh, ohs” disguise just risqué the track actually is. Even if you know the words by heart after listening 500 times on your old portable CD player, a closer read at the lyrics reveal how many obvious sexual references went right over your head. It turns out millennials spent middle school jamming out to a song about a girl who’s feeling frustrated about her lack of good action but refusing to go for just any D. At least it explains why you may not have been surprised when Xtina actually went straight-up “Dirrty.”

Most young millennials (and their parents) were completely oblivious to the true meaning of “Genie In A Bottle,” because the song was a smash regardless. It marked Aguilera’s first No. 1 hit on the Billboard Hot 100 and became the second best-selling single of 1999, just behind Cher’s “Believe.” VH1 named it one of the 100 greatest songs of the ’90s, and a study conducted by The Pudding said it was one of the most recognizable ’90s hits among both millennial and Gen Z listeners. At this point, it’s a certified classic that’s transcended generations and can get anyone in the club or grocery store dancing. Now, let’s dive into the lyrics and become more aware of what we’re actually singing along to.

For a century of lonely nights

Waiting for someone to release me

And blowing kisses my way,

But that don’t mean I’m gonna give it away

The first three lines of the song’s first verse are a standard trope for any story about a genie (see: the kid-friendly Aladdin). However, when she says “that don’t mean I’m gonna give it away,” the “it” means herself. While you may cringe thinking about how loud your preteen self sang these words, we should applaud Xtina for not letting some guy lickin’ his lips go anywhere near her. He sounds creepy.

But my heart is sayin’ no

This is a classic case of denying intimacy without a love connection, or in other words, “heart-over-libido.” However, there does seem to be a tinge of regret in these words. Those lonely nights have taken a toll.

If you wanna be with me

Baby, there’s a price to pay

You gotta rub me the right way

If you wanna be with me

I can make your wish come true

You gotta make a big impression

It’s miraculous that the sexual innuendos hidden in the song’s chorus went over your parents’ heads, because none of us would’ve been allowed to be Xtina fans if they knew what she was really singing about. When she says “rub me the right way,” she indeed means her body and, more specifically, her intimate body parts. She can make her suitor’s wish come true, meaning intimacy, but first, he’s “gotta make a big impression.” This could just mean a good first impression personality-wise, but let’s be real: She’s likely referring to his intimate body parts.

The music’s fading and the lights down low

Just one more dance and then we’re good to go

Waiting for someone who needs me

Hormones racing at the speed of light

But that don’t mean it’s gotta be tonight

Whatever words your classmates were singing in middle school, it probably wasn’t “hormones,” which just makes this song’s filthiness even more surreal. Those hormones might not have been enough to make Aguilera cave to this creepy dude, but she was definitely singing about the temptation. The song explains why it was only a matter of time before Xtina Stripped herself down, changing the landscape of pop music forever.

This article was originally published on Aug. 24, 2014