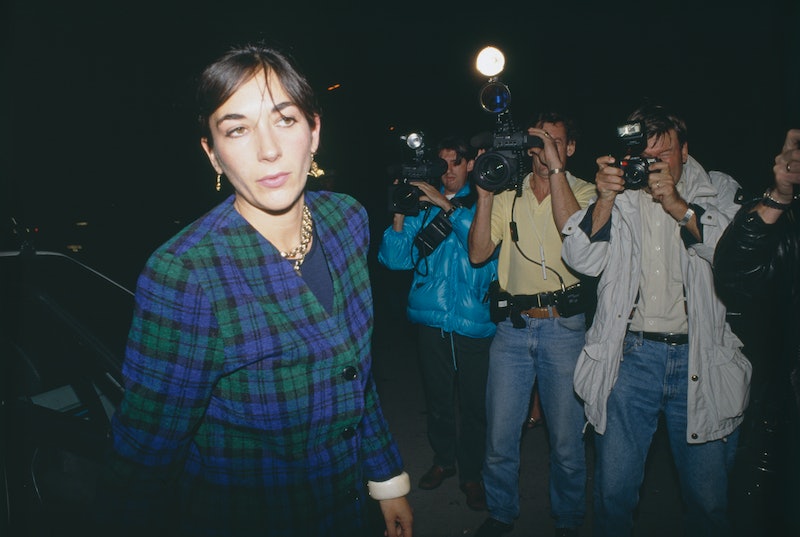 On July 2, 2020, Jeffrey Epstein's former girlfriend Ghislaine Maxwell was arrested in Bradford, New Hampshire. The British heiress had spent years evading the public eye and even tried to hide when the FBI arrived to take her into custody, according to The New York Times. But while Maxwell's case is still ongoing, her arrest marks a huge turn.

Though Maxwell has long denied any wrongdoing, many of Epstein’s accusers have alleged that Maxwell helped to recruit and groom underage girls in order to build a sexual abuse ring. In a 2015 civil suit, defendant Virginia Giuffre accused Maxwell of “acting as a madam” for Epstein by “recruiting, maintaining, harbouring and trafficking girls" for him.

"Maxwell was among Epstein's closest associates and helped him exploit girls who were as young as 14 years old," Audrey Strauss, acting U.S. attorney for the Southern District of New York, said at a news conference after Maxwell's arrest, per NPR.

Following Epstein's death in 2019, the FBI kept an eye on Maxwell. "We learned she'd slithered away to a gorgeous property in New Hampshire — continuing to live a life of privilege while her victims live with the trauma inflicted upon them years ago," William F. Sweeney Jr., assistant director in charge of the FBI's New York Field Office, said at the same conference.

According to the court documents, Maxwell stands accused of transporting a minor for the purposes of criminal sexual activity, perjury, and conspiring to entice minors to travel to engage in illegal sex acts. The indictment alleges a clear pattern of abuse: Maxwell would take the girls shopping and to the movies, ask them about their families and school, and once they were comfortable with her, attempt "to normalize sexual abuse." The indictment alleges Maxwell would do this by sometimes undressing in front of the victims, or by involving them in "sexualized massages." These charges carry sentences that vary from five to 10 years each.

Maxwell has been incarcerated since her July 2 arrest. On July 3, federal prosecutors discovered that for a five-year period beginning in 2007, Maxwell and Epstein exchanged more than $20 million dollars between their bank accounts. This has raised flags about possible money laundering, and that investigation is ongoing.

On July 14, Maxwell was denied bail. The judge noted that her significant financial resources, international passports, and "extraordinary capacity to avoid detection" made her an "extreme" flight risk. "The defendant has the ability to remain in hiding," prosecutor Alison Moe warned the judge. "She's good at it," and has shown an "ability and willingness to live off the grid indefinitely."

On Aug. 4, President Donald Trump defended Maxwell in an Axios on HBO interview. "Her friend or boyfriend [Epstein] was either killed or committed suicide. She's now in jail. Yeah, I wish her well. I'd wish you well. I'd wish a lot of people well. Good luck. Let them prove somebody was guilty," he said.

In response, Giuffre maintains that Maxwell molested her in front of Epstein, an incident that she details in her new manuscript The Billionaire's Playboy Club. “I didn’t know if she was doing this for the sake of his eye-candy,” Giuffre wrote, but it was one of the “darker experiences of my young life."

Per Newsweek, Maxwell will be held at the Metropolitan Detention Center in Brooklyn until her trial next year.

More like this
A New Netflix Doc Will Explore The Unsolved Murder Of Jill Dando
By Sam Ramsden
This First Look At 'The Gold' Shows Jack Lowden In A Whole New Light
By El Hunt and Sam Ramsden
Here’s What Happens To Bill & Frank In 'The Last Of Us' Video Game
By Brad Witter
Michael B. Jordan Tackled His "Public Breakup" With Lori Harvey On 'SNL'
By Brad Witter
Get Even More From Bustle — Sign Up For The Newsletter
From hair trends to relationship advice, our daily newsletter has everything you need to sound like a person who’s on TikTok, even if you aren’t.