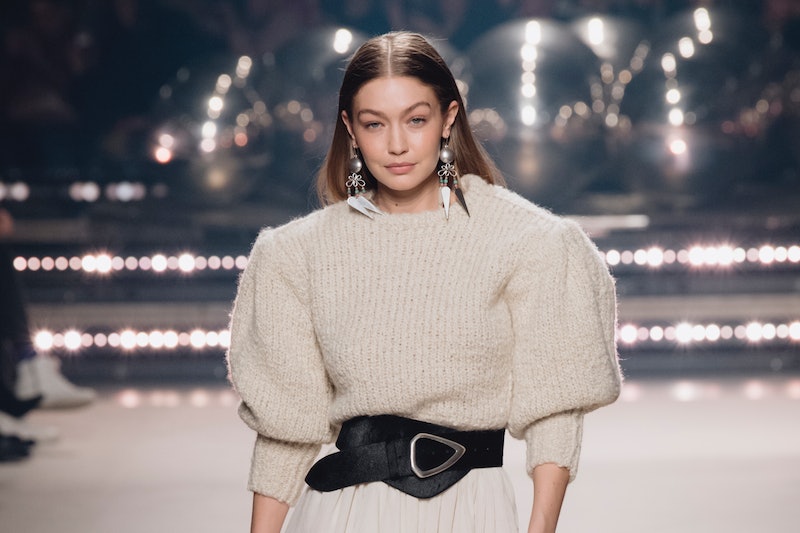 Being pregnant during a global pandemic is hard enough, let alone being pregnant and famous. Just ask Gigi Hadid, who has been keeping details about her pregnancy, including her growing baby bump, private — until now that is. Gigi Hadid showed off her baby bump for the very first time on Wednesday, July 15, during an Instagram Live. But don't get used to it. The model also said that she wouldn't be posting bump photos regularly, or sharing all the gory details of her pregnancy with fans anytime soon.

Hadid signed on to chat with fans to promote her newest collaboration with V Magazine, the Gigi Journal Part II, but it turns out all her fans wanted to know about was her pregnancy. "I am so grateful for the positive comments and the questions and wanting to know that we're all good and safe," she said, "And everything's going great, and I love you guys. I do appreciate those positive comments." She continued, explaining that the reason she wasn't sharing much about her pregnancy online is because, with everything going on in the world — the coronavirus and the renewed momentum behind the Black Lives Matter movement — she didn't want to use her social media to spotlight herself. "I felt that our social media should be used for that [BLM]," she said. But she assured fans that she has also been taking "a ton of pictures of my bump."

For now, Hadid's baby bump photos are being kept just for her and her loved ones. However, she did give fans a peek at her growing belly while addressing her previous Instagram Live, during which some fans questioned her pregnancy because they couldn't see her bump. "There's my belly y'all," she said, turning to show off her profile.

"I love you all and I really appreciate your positive messages. i'm just taking my time with sharing my pregnancy and you guys will see it when you see it," Hadid added after covering back up. She spent the rest of her Instagram Live going through her special Gigi Journal Part II, which spotlights various artists and gives fans a look at what artists have been working on in quarantine, with a specific focus on Black artists to highlight and recognize the BLM movement.

The model is expecting her first child with boyfriend, Zayn Malik. Hadid confirmed the news during an appearance on The Tonight Show with Jimmy Fallon on April 30, after her pregnancy leaked to the media. "Obviously we wished we could have announced it on our own terms," she told Fallon at the time. Given how little control she's had over the public nature of her pregnancy, it's understandable she'd want to keep this special time to herself.

More like this
You’ll Definitely Recognise Isadóra Bjarkardóttir Barney’s Mum
By Maxine Harrison
'Love Island’s Kai Fagan Is Very Clear About What He Doesn’t Like
By Sam Ramsden and Darshita Goyal
Adam Ali Hopes 'Waterloo Road' Will “Subvert” Queer Misconceptions
By Sam Ramsden
Turns Out George Clooney Is A Huge Fan Of This Classic British Game Show
By El Hunt
Get Even More From Bustle — Sign Up For The Newsletter
From hair trends to relationship advice, our daily newsletter has everything you need to sound like a person who’s on TikTok, even if you aren’t.