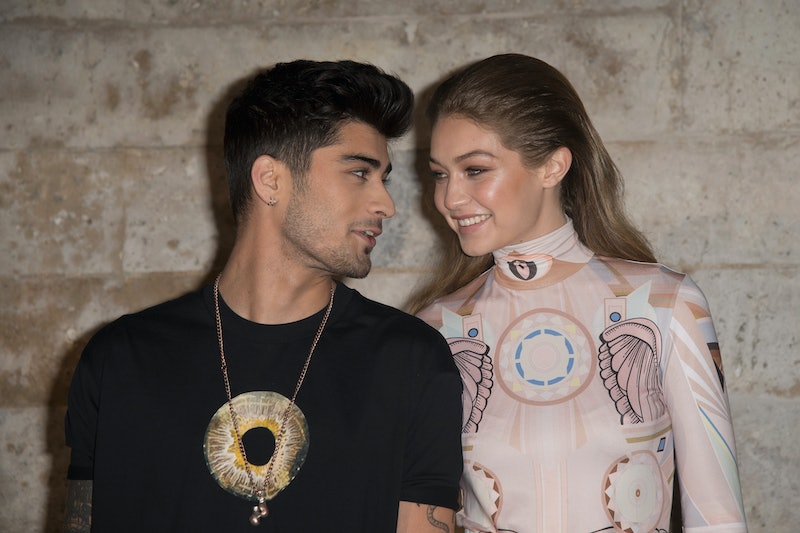 Parents with Instagram accounts have a lot of power. Exhibit A: Mohamed Hadid, father of Gigi and Bella, might have just spilled some major family news on the social media platform. Fans were convinced Gigi Hadid had given birth to her first child with Zayn Malik after Mohamed's since-deleted Instagram post shared Wednesday, Sept. 16. Bustle reached out to representatives for Hadid and Malik, but did not receive an immediate response.

The post in question was a letter from Mohamed to his "little grandchild," and while he is already a grandfather, it's pretty obvious he's talking about Hadid's bundle of joy. He tagged her in the photo and the caption, writing, "In the name of God [the] merciful I want to say I love you and so proud of you. @gigihadid." In the letter, Mohamed wrote in part, "Know that Grandpa's always near. I'll do anything, anything for you my dear." Mohamed's letter didn't contain any confirmation of birth, and it seems now that it was meant for his unborn grandchild. According to Us Weekly, after a fan asked if this meant Hadid had given birth, the proud grandfather wrote, "no not yet." He later deleted the post completely.

Mohamed is far from her only relative to have celebrated her pregnancy online. Just the day before, Bella Hadid shared a photo from June of the sisters showing off their "buns in the oven" — Hadid's was "from @zayn" and Bella noted hers was "from my burger."

This may have been a false alarm, but the timing would potentially match based on what we know about Hadid's pregnancy. Hadid confirmed her pregnancy in April a few days after the news leaked to TMZ. And, though she did not give any details about how far along she was at the time, months later, on Aug. 26, she shared her first official pregnancy photos on Instagram, noting that they were taken on July 26. A few days later, the model shared some more pregnancy shots, presumably from the same shoot, confirming in the caption that she was "33 weeks" at the time. And that would make her due date right around now.

Editor's Note: This post has been updated to reflect Mohamed Hadid's clarification and the deletion of the post.