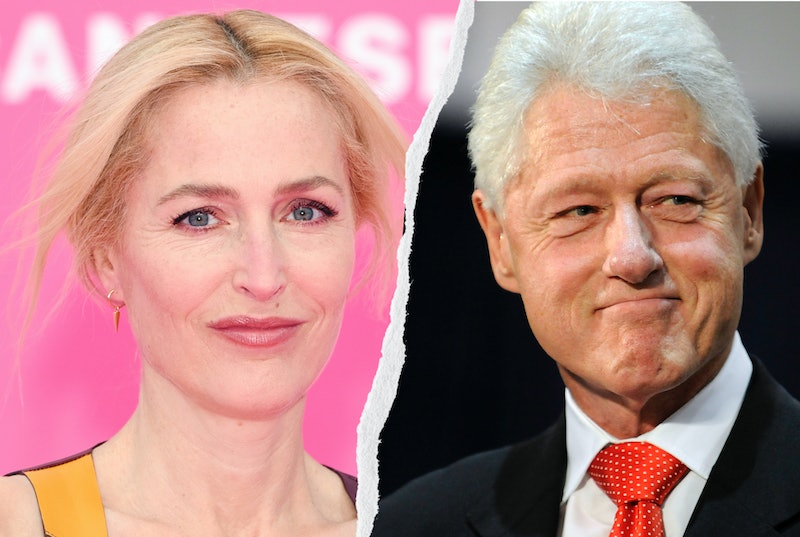 After winning an Emmy for her portrayal of Margaret Thatcher in The Crown, Gillian Anderson is stepping into the shoes of another political figure: Eleanor Roosevelt. The starlet dropped by Jimmy Kimmel Live! to talk about her lead role in Showtime’s The First Lady series. During her chat with the host, talk turned to the White House, and Anderson recalled the time she met Bill Clinton in the 90s.

“It was lunch for him at somebody's fancy house in the Hollywood Hills,” she explained. “At the end of his speech, or whatever, we you know, created a line for him to walk down the line and shake hands, and we got to meet him.”

She went on to describe his especially firm, “intimate” handshake. “He did the most miraculous thing in the world,” said Anderson. “That thing where he shakes your hand and grabs your elbow at the same time.”

“He, like, holds your arm further up, slightly intimate little thing, makes eye contact and then moves on to the next person. Then he looks back at you.”

At the time, Anderson felt the experience was so intense, that Clinton might somehow try to contact her afterwards.She explained, as the audience laughed, “I went home, this was in the days of answering machines, I literally thought that I was going to go home to a message from him. I did [think that]. It was that real.”

Kimmel quipped: “Your answering machine was probably broken, because he definitely called.” Upon hearing that Anderson voted for Clinton after the incident, Kimmel remarked: “Even though he didn't call? Wow.”