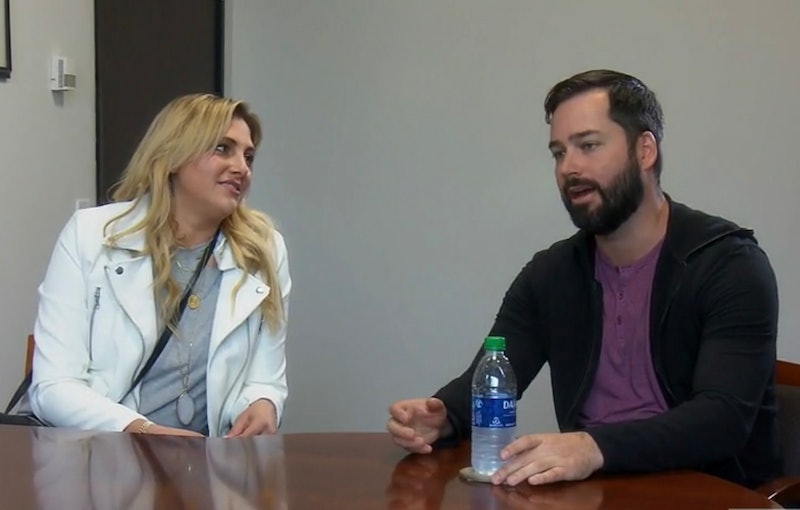 She may have confirmed their relationship about a year ago, but RHOC's Gina Kirschenheiter and boyfriend Travis Mullen didn't make their coupling Bravo official until the series' Season 15 premiere. In the episode, fans learned that in the gap between seasons, Gina had met her "forever person," and they were already living together. "This is my house, financially, but this is our home," she explained to costar Shannon Beador of the new three-bedroom Rancho Mission Viejo condo the couple is sharing with their collective six children. (They have three kids each, and the "little squad" has bunk beds.)

"Travis is the epitome of what a real man should be. He's compassionate, he's kind, he's kind of nerdy, but he's also really sexy," Gina said in a confessional, adding that Travis and her ex-husband Matt have "no relationship" but are "respectful" of each other. "He's like the most honest, genuine person I've ever met."

As for what else there is to know about Travis, his Instagram account is set to private, though he does frequently appear in Gina's social media posts. According to Travis' LinkedIn page, he works in investment banking and is currently a private equity partner at Alpine Creek Capital Partners in Orange County. He previously received accounting degrees from California State University-Fullerton's College of Business and Economics in 2010 and from the University of Southern California's Marshall School of Business in 2011.

In February, Gina told People that though they'd only been dating for six months at the time, she felt like she'd "known him forever," and they were "so comfortable" together. "It’s the weirdest thing. I'm not the type of girl who has to be with a guy or in a relationship," she said. "Even throughout drama with my ex, I was perfectly fine on my own and doing my own thing. But from the moment I started talking to Travis, I knew I had very sharp feelings for him."

Don't expect wedding bells anytime soon, though. "I'm enjoying having a partner in life so much that marriage doesn’t really matter to me," she added to the magazine. "Who knows, maybe one day. But it's way too early now."

More like this
Zach Swears He Didn’t Look Up Contestants Before The Bachelor Began Filming
By Brad Witter
The Bachelor’s Christina Mandrell Comes From One Of Country Music’s Most Famous Families
By Brad Witter
'RHOSLC' Star Jen Shah Refuses To Do A Post-Sentencing Interview With Andy Cohen
By Brad Witter and Jake Viswanath
'RHOP' Stars Robyn & Juan Reportedly Got Remarried & Filmed The Ceremony
By Brad Witter
Get Even More From Bustle — Sign Up For The Newsletter
From hair trends to relationship advice, our daily newsletter has everything you need to sound like a person who’s on TikTok, even if you aren’t.