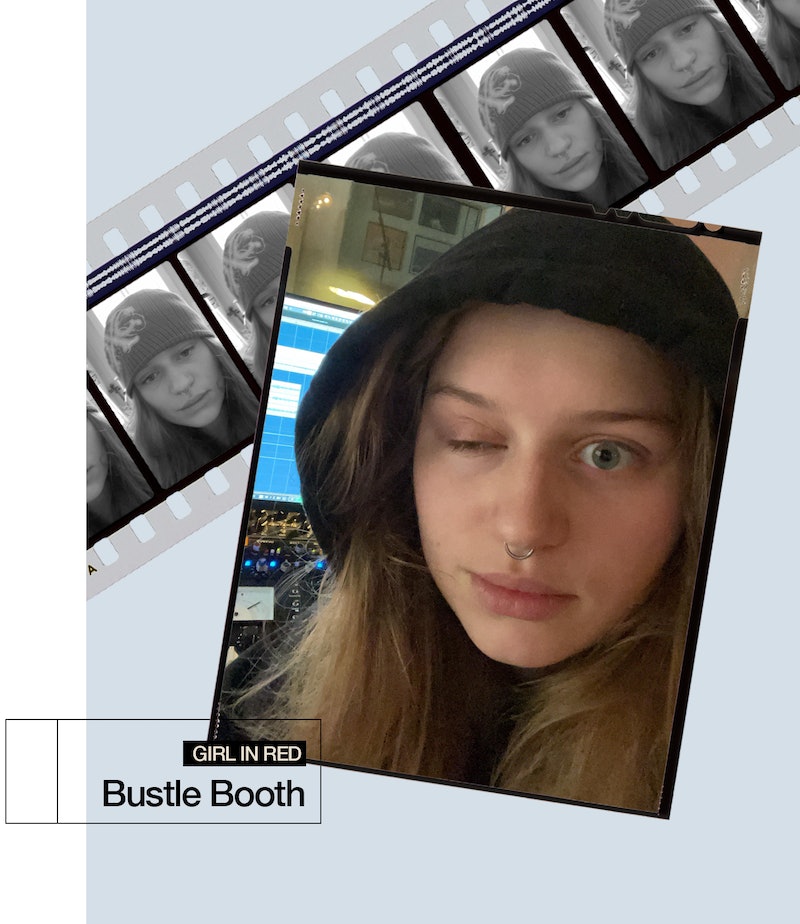 If you peruse queer TikTok, you’re bound to stumble across the ‘do you listen to girl in red?’ phenomenon. The question has become a discreet way to ask another woman if she's interested in women — and no one is more thrilled about this trend than the artist behind the viral pick-up line. “Everything I have written about comes from a queer perspective,” the singer-songwriter, whose given name is Marie Ulven, explains to Bustle. It's the kind of musical representation Ulven wishes she'd had growing up queer in a small town in Norway.

Instead, Ulven first found her love of music through American Top 40 radio, and describes herself as a Beyoncé fan who watched a lot of Hannah Montana. (Ulven's been rewatching the Disney classic over quarantine and thinks it's “honestly f*cking genius that they literally [created] a teenage icon.") She got her first guitar when she was 13 as a Christmas gift from her grandfather and then started writing, playing, and producing her own music. While she didn't have any visions of becoming a famous musician, it didn't take long for her songs to get noticed.

Now 21, Ulven is one of the leading artists in the bedroom pop movement, having broken onto the scene with her SoundCloud song turned smash indie hit, “i wanna be your girlfriend.” (The New York Times even named it one of the best songs of 2018.) Ulven was relatively unknown in Norway when she released her seminal track, but suddenly she started gaining traction in the U.S. “I was really scared and worried that I was going to become a diva," she says with a laugh. "That I was going to become a bitch and that I would wear sunglasses every time I met a person inside... but that didn’t happen."

Instead of fretting over the perils of fame, Ulven's been channeling her energy into her upcoming debut album. Her most recent releases have explored her own mental health struggles on the Euphoria-inspired single “rue” and celebrated queer love at Christmastime on “two queens in a king sized bed.” Yet despite these recent outputs, the pressure to craft a debut album still weighs on Ulven. “I’m at a point where I need to figure out how I make music again,” she says before regaining her confidence. “But I’m going to figure it out and do some cool sh*t.”

I don't have one really

I really loved The Simpsons but I'm not sure if that passes as a cartoon because it's adult humor. I didn't understand the humor I just thought the cartoons were cool

I'm really into Gilmore Girls and I have been for a while. I'm nearing the end of all of the seasons now but I'll find something else after that

[Something with] Gordon Ramsay! I love him

I've never done karaoke so I'm not sure

That I'm nice and that I'm a good person

More like this
Hailee Kaleem Wright's Topsy-Turvy Path From MTV To Broadway
By Samantha Leach
Lizzo Scares Herself Meeting Her Madame Tussauds Wax Figures In A TikTok Video
By Alyssa Lapid
All The Best Celebrity Reactions At The 2023 Grammys
By Brad Witter
The Beyhive Is Mad At Harry Styles After Beyoncé’s Album Of The Year Snub
By Jake Viswanath
Get Even More From Bustle — Sign Up For The Newsletter
From hair trends to relationship advice, our daily newsletter has everything you need to sound like a person who’s on TikTok, even if you aren’t.