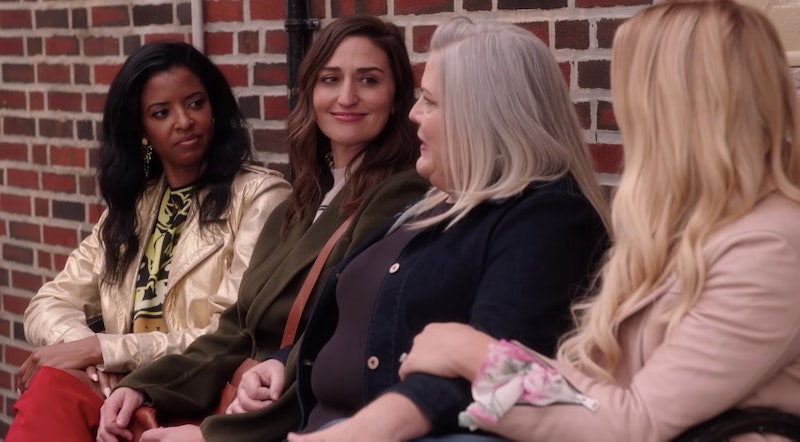 With news of its official trailer, it’s evident that the time for Peacock's forthcoming comedy Girls5eva, which gives an inside glimpse into a fictionalized, hilarious account of one-hit-wonder girl groups, is near. In it, actors Busy Phillips, Sara Bareilles, Renée Elise Goldsberry, and famed Saturday Night Live writer Paula Pell are given the rare chance to relive their glory days as Girls5eva after booking a gig 20 years past the group’s prime. It’s set to be one of the most anticipated series this year, so here’s everything we know about Peacock’s latest offering:

News of the musical sitcom about the fictional '90s stars who were given a second chance at superstardom was first announced in August. Bareilles' lead character, Dawn, is described as “a former member of Girls5eva, who is now a bit restless in life managing her family’s small Italian restaurant in Queens.” Phillips, Goldsberry, and Pell round out the rest of the reunited girl group as characters Summer, Wickie, and Gloria, respectively. More specifically, Goldsberry stars as the group’s resident fashion plate, Phillips as the one most likely to become a reality show star, and Pell as the one who appears to have acclimated the most to normal post-Girls5eva life.

Behind the scenes, Tina Fey, Jeff Richmond, and Robert Carlock are credited as executive producers of Girls5eva. (Carlock is best known as working with Fey as the showrunner of 30 Rock.) In August, Bareilles told Variety, “It is a pinch-me moment to get to cross paths creatively with women like Meredith Scardino and Tina Fey, who I have been a fan of forever. I am a longtime admirer of so many of the characters they have brought to life in other projects, and I am already in love with the women at the center of Girls5eva." She continued, "I am so excited to help bring to life what I will know to be a smart, creative, hilarious show with a lot of heart.”

Girls5eva is Bareilles’ TV comedy debut; however, the performer did show off her golden vocal chops on the small screen alongside John Legend for NBC’s Jesus Christ Superstar: Live in Concert broadcast in 2018. And Bareilles isn't the only Girls5eva cast member who has portrayed a singing character on television. Phillips fans may remember her as Joey Potter’s free-spirited college roomie, Audrey Liddell, on Dawson’s Creek. Not only was Liddell a Worthington University college student, but she was also an aspiring singer.

Goldsberry and Pell are also accomplished singers in their own right. Goldsberry portrayed Angelica Schuyler in the Off-Broadway, Broadway, and filmed-for-TV production of Hamilton and has a Tony award to boot. In 2021, Pell, who crafted a memorable performance in Wine Country, told WNYC Studios’ Here’s The Thing that she held down a job “singing and dancing at a Florida theme park” before joining Saturday Night Live as a writer.

On April 6, 2021, the official Girls5eva trailer landed, teasing the Real Housewives jokes and pointed social media commentary to come. Some glimpses in the trailer also showcase Broadway and Emily In Paris star Ashley Park, whose character is described as “the glue that held the short-lived girl group Girls5eva together.” Deadline reported her casting in October 2020, adding that Park’s character — also named Ashley — had been a member in seven failed girl groups.

Girls5eva premieres May 6 on Peacock, so secure your login now.

More like this
'Bel-Air' Season 2 Finally Has A Release Date & A New Trailer
By Brad Witter, Kadin Burnett and Sam Ramsden
The 'Wednesday' Creators Are Already Discussing A Potential Season 2
By Brad Witter
The First Trailer For 'That '90s Show' Includes So Many Nods To The Original Series
By Jack Irvin, Alyssa Lapid and Grace Wehniainen
Everything To Know About 'Interview With The Vampire' Season 2
By Grace Wehniainen
Get Even More From Bustle — Sign Up For The Newsletter