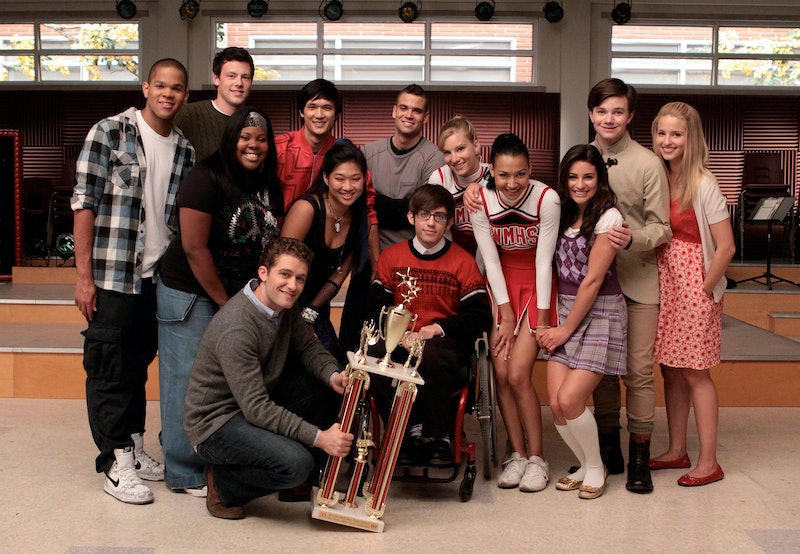 Six days after disappearing from a boat while swimming with her 4-year-old son, Naya Rivera's body has been recovered from Lake Piru, as confirmed by the Ventura County Sheriff's Department. Celebrities and Glee stars have begun paying tribute to Rivera, who played the charismatic cheerleader and singer Santana Lopez on the Fox series, on social media. Cast members including Jane Lynch and Josh Sussman shared their memories of the 33-year-old on Twitter, as well as sending their condolences to her family, including her son, Josey, who was found alone and safe in the boat on July 8.

As Santana, Rivera quickly became a fan favorite character on Glee. The sharp-tongued cheerleader presented herself as someone brimming with bravado. Santana's relationship with fellow cheerleader Brittany, became a touchstone for the series, and a beautiful example of LGBTQ+ representation on TV at a time when the medium wasn't known for its inclusivity. Off screen, Rivera championed the couple and the fans who supported them. In a May 2011 interview with the Los Angeles Times, the actor said, "Honestly, I never thought I’d actually be playing a teen lesbian. I didn’t think it was going to go this far. But I’m glad that it did, because there have been a lot of fans who have expressed that they’ve been going through similar situations in their lives. I’ve heard from girls that are in high school, they’re 16, 17, and they’re like, 'I came out to my mom,’ or ‘I came out to my friends, and thank you for helping me do that.'"

Both Rivera and her character were pivotal parts what made Glee such a special show, and her co-stars' messages of grief and love show how much she'll be missed.

Rivera's onscreen love interest, Heather Morris, paid tribute to the actor on Wednesday, July 15, with a moving Instagram post. "You constantly taught me lessons about grief, about beauty and poise, about being strong, resilient and about not giving a f*ck," she wrote in part, alongside photos of their sons playing together.

Glee creators Ryan Murphy, Brad Falchuk, and Ian Brennan released a joint statement on Tuesday, July 14, honoring Rivera and reflecting on her legacy, calling her "one of the most talented, special stars we would ever have the pleasure of working with," per The Hollywood Reporter. While they commended her musical performances on the show, the three writers agreed that Rivera's most lasting impact in the Glee community might just be her character's onscreen relationship with Brittany. "Naya understood what 'Brittana' meant to the many young women who were seeing themselves represented on television for the first time," the wrote. "Naya always made sure Santana's love for Brittany was expressed with dignity, strength and with pure intentions."

The three also announced that they would be creating a college fund "for the beautiful son Naya loved most of all," Josey.

Dianna Agron, who starred as one of Santana's best friends, Quinn, remembered how Rivera became her "first friend and ally" on set. "Naya lead with truth, humor, wit. I loved her for all of these reasons," she wrote.

Chris Colfer, who played Kurt on Glee, wrote a heartbreaking tribute on Instagram. "Her brilliance and humor were unmatched. Her beauty and talent were otherworldly. She spoke truth to power with poise and fearlessness," he wrote in part. "She cound turn a bad day into a great day with a single remark."

Jenna Ushkowitz, another original Glee cast member, also took to Instagram, sharing a sweet photo of her with Rivera. "I cannot believe I took for granted that you'd always be here," she wrote in part. "Our friendship went in waves as life happens and we grow, so I will not look back and regret, but know I love you and promise to help the legacy of your talent, humor, light and loyalty live on." She also pledged to "make sure Josey and your family" feel how loved Rivera was.

Darren Criss recalled how "Naya made me laugh like no one else on that set."

Kevin McHale, another original Glee cast member, wrote that Rivera "made me a better person," on Instagram, and revealed that the two had been joking about "running away to Hawaii" just last week.

Sharing one of Rivera's videos of her singing with her young son, Riley wrote a short message on Instagram. "My favorite duet partner. I love you. I miss you," she wrote in part, adding that she didn't "have words right now."

Lea Michele paid tribute to both Cory Monteith, who died seven years ago, and Rivera on her Instagram, sharing some personal photos of the two.

Matthew Morrison, who played Glee leader Mr. Schuester, wrote a lengthy tribute to Rivera on Tuesday, July 14. "Glee acted as only a snippet of her life that we all, thankfully, had the honor of witnessing," he wrote in part. "But Naya would shine brightest when surrounded by her wonderful family." He continued, "Naya was fervent about motherhood and had a steadfast love for Josey. It is that powerful love that ensures us that her story does not end here."

Lynch, who played Coach Sue Sylvester, tweeted, "Rest sweet, Naya. What a force you were. Love and peace to your family."

Harry Shum Jr. also promised to keep Rivera's "legacy and spirit alive" for her son Josey in his lengthy tribute.

Grant Gustin, who performed a memorable duet to "Smooth Criminal" with Rivera when he guest starred on Glee, remembered the actor in an Instagram post shared Wednesday. "I was intimidated by her talent and presence on set, but she was always so kind and welcoming to me," The Flash star wrote, sharing a photo of Rivera and her son. "My heart breaks for her family and friends. I'll always keep Naya in my heart and remember her for the strong, talented and compassionate person she was to me in the brief time I got to spend with her," he wrote in part.

Ashley Fink, who played Lauren Zizes on Glee, recalled one of her favorite moments with Rivera on the Glee tour.

Alex Newell, who appeared in later seasons of Glee, tweeted a message to Rivera's son, Josey, writing in part, "Josey you are truly loved by every single person who loves your mommy! I love you Naya!" Newell also wrote a longer tribute on Instagram, sharing a video clip from one of their Glee behind-the-scenes videos.

Glee was known for attracting a wide variety of guest stars, many of whom also took to social media to honor Rivera. Gwyneth Paltrow shared a video clip of her time on Glee, recalling the "special moment" she sang "Landslide" with Rivera and Morris. "I am in utter shock and disbelief that someone so full of life and passion and talent is no longer with us," she wrote.

Other celebrities, who had been sharing wishes and prayers for Rivera's safe return, also tweeted their condolences on Monday. Gabby Sidibe remembered the actor as "sweet, smart, funny and endlessly talented." Kehlani paid tribute to Rivera, recalling her performance of "Songbird" on Glee, writing, "the reason songbird by fleetwood mac is one of my favorite songs ever is because of the glee soundtrack version. she transformed it."

Even Glee's official Twitter account shared a tribute, writing in part, "Naya was a fierce talent with so much more to do and this is such a terrible tragedy. We are forever grateful for the indelible contribution she made to GLEE, from the first episode to the last."

This post will be updated as more tributes are posted.

This article was originally published on July 13, 2020