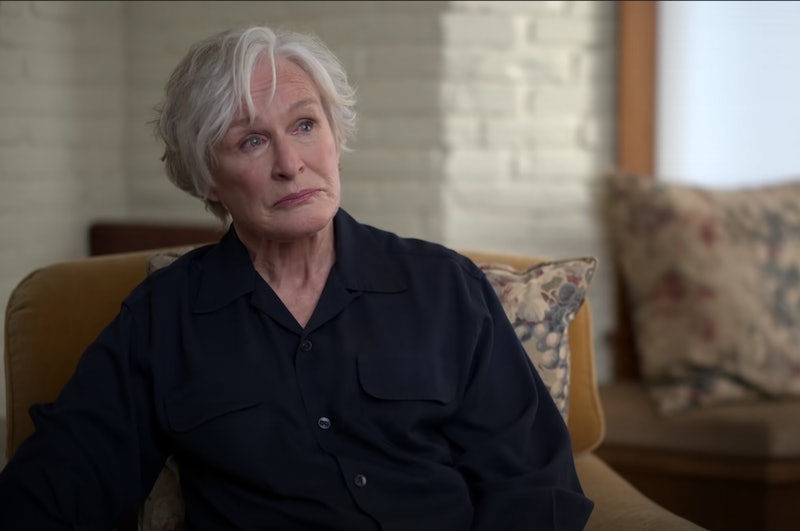 In an emotional interview, Glenn Close revealed that she was raised in a religious “cult” until she was in her 20s. The Oscar-nominated actor appeared on The Me You Can’t See, Oprah Winfrey and Prince Harry’s new Apple TV+ series focusing on the importance of mental health, and opened up about how her family’s upbringing affected their collective mental health.

Close said her family enlisted in a group called MRA, which stands for Moral Re-Armament, when she was just 7 years old, and was only able to leave when she was 22. She said the group mandated many rules and had a “lot of control” over their members. “Everybody spouted the same things,” she said. “Because of how we were raised, anything that you thought you would do for yourself was considered selfish. We never went on family vacations or we didn’t have any collective memory about stuff other than what we went through.”

The MRA was founded in 1938 on the belief that you had to make change within yourself in order to change the world. According to The Independent, Close’s father got so involved with the group that he moved the whole family to Switzerland, and the Albert Nobbs star only escaped when she embarked on her acting career in the U.S.

However, her 15 years in the group had a profound impact on her family’s relationships. “It was so awful,” she said. “We were so broken up. It’s astounding that something you went through at such an early stage of your life still has such a potential to be destructive.” Close even attributed her three divorces to the severity of her childhood trauma. “I have not been successful in my relationships and finding a permanent partner, and I’m sorry about that,” she said. “I think it’s our natural state to be connected like that.”

Close has been a staunch activist for combatting the stigma of mental health, inspired by her family’s own struggles with mental health. Close’s sister Jessie was diagnosed with bipolar disorder in 2004, after discovering a line of mental health illnesses in their family’s genetics, while her nephew Calen has schizophrenia. Close told PEOPLE in May that she’s also dealt with acute depression. “I think what I’ve lived with probably a good portion of my life is a low-grade depression that can sometimes feel like a mist or like there’s a veil over you,” she explained.

Since becoming more open about their mental health struggles, Close’s family bond has grown much stronger, resulting in the actor moving to Bozeman, Montana in 2019 to live near all of her siblings. “That has psychologically grounded me in very important ways,” she said. “There’s millions of other families who are going through the same thing. My story is fully realized when I’m with my family. People die without connection. That’s how we’re wired.”

More like this
Everything To Know About 'The Real Housewives Ultimate Girls Trip' Season 4
By Jake Viswanath
Andy Cohen Apologized To Larsa Pippen After A 'RHOM' Season 5 Reunion Dust-Up
By Brad Witter
Stephen Graham & Steve McQueen Are Working On A Wartime Drama
By Darshita Goyal
Ashton Kutcher Wants Danny Masterson “To Be Found Innocent” In Rape Retrial
By Jake Viswanath
Get Even More From Bustle — Sign Up For The Newsletter
From hair trends to relationship advice, our daily newsletter has everything you need to sound like a person who’s on TikTok, even if you aren’t.