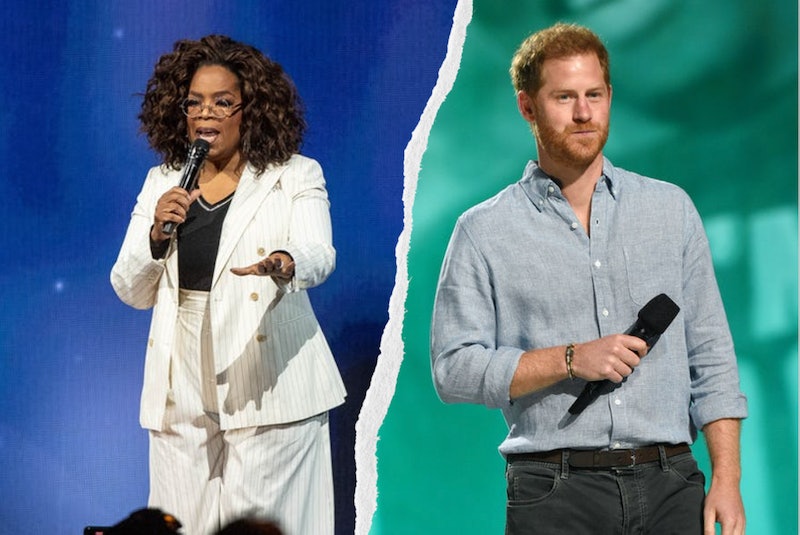 Considering her talk show ran for 25 seasons, it’s safe to say Oprah Winfrey knows a thing or two about interviews. That’s exactly why she was trusted to conduct the instantly iconic March 2020 sit-down chat with Prince Harry and Meghan Markle about their decision to step away from their royal duties. The discussion featured a heavy emphasis on mental health, a topic close to Prince Harry’s heart as he’s since nabbed a position working for BetterUp, a startup that aims to promote mental health discussions in the workplace. Combined with Winfrey’s long-running promotion of mental and physical wellness, it’s only fitting that she and Prince Harry are teaming up for a new AppleTV+ docuseries featuring mental health discussions with A-list celebrities. Here’s everything we know about the forthcoming series titled The Me You Can’t See.

What Is The Me You Can’t See About?

Per AppleTV+’s official show description, The Me You Can’t See will feature “honest discussions about mental health and emotional well-being” guided by Winfrey and the Duke of Sussex, who will also open up about their own mental wellness journeys. The pair will chat with high-profile guests from the world of entertainment about their experiences to reduce the stigma surrounding mental health, aiming to reach viewers of all cultures, ages, genders, and socioeconomic statuses. The series will also provide viewers with insight on various types of mental health treatment, thanks to a team of 14 accredited and respected experts and organizations.

Speaking to AppleTV+, Winfrey revealed the series’ goals. “Now more than ever, there is an immediate need to replace the shame surrounding mental health with wisdom, compassion, and honesty,” she said. “Our series aims to spark that global conversation.”

“We are born into different lives, brought up in different environments, and as a result are exposed to different experiences. But our shared experience is that we are all human,” Prince Harry told the streaming service. “The majority of us carry some form of unresolved trauma, loss, or grief, which feels — and is — very personal. Yet the last year has shown us that we are all in this together, and my hope is that this series will show there is power in vulnerability, connection in empathy, and strength in honesty.”

Who Is Involved In The Me You Can’t See?

The Me You Can’t See Trailer

A powerful trailer for The Me You Can’t See was released on May 17. In it, Winfrey says, “With that stigma of being labelled the other the telling of the story, being able to say, ‘This is what happened to me,’ is crucial.”

In the trailer, we see Winfrey and Prince Harry sitting opposite one another, discussing the ways they’ve heard mental health be discussed. “‘Crazy,’” Prince Harry offers and Winfrey follows up, “‘Lost it’, ‘San’t keep it together.’”

The trailer then transports us to places around the world, spotlighting different people from different walks of life who will tell their story for the documentary.

One of the people we hear from is Lady Gaga, who says, “I don’t tell this story for my own self service. I’ve been through it and people need help.” We also see Glenn Close appear on screen, along with Hussain Manawer, DeMar DeRozan, and others.

Meghan, the Duchess of Sussex, also pops up twice during the trailer: once alongside Harry on a video call and once with baby Archie, reading a story.

The Me You Can’t See Release Date

The Me You Can’t See is set to premiere on Apple TV+ starting May 21, though the platform has yet to announce details regarding how many episodes will be released at a time.

This post will be updated with the trailer, release date, and additional details as more information on The Me You Can’t See becomes available.

This article was originally published on May 10, 2021