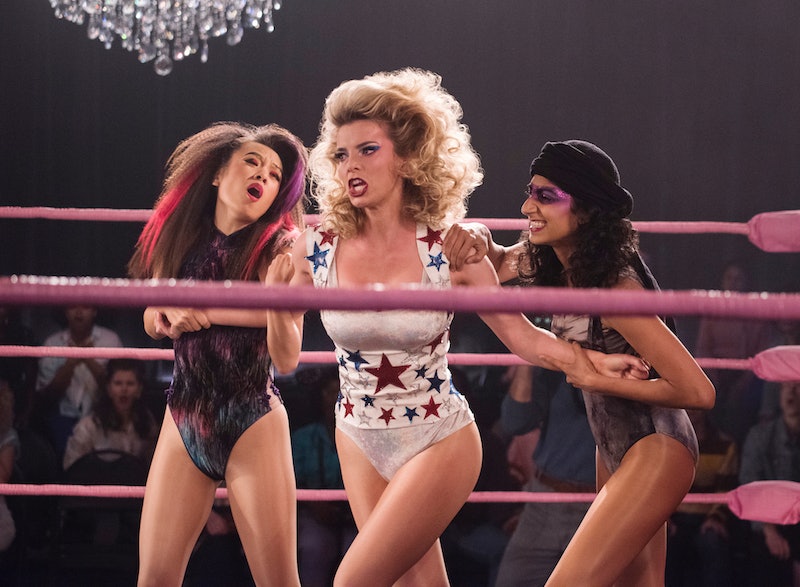 Following the show’s cancellation, GLOW actors said Season 4 of the Netflix female wrestling dramedy would have done better in terms of representation. In statements shared on Instagram on Monday, Oct. 19, six of the show's stars revealed that they had penned a letter to GLOW’s creators and executive producers to demand a more nuanced development of characters of color in the wake of the Black Lives Matter movement. The actors — Sunita Mani (Arthie), Sydelle Noel (Cherry), Britney Young (Carmen), Shakira Barrera (Yolanda), Kia Stevens (Tammé), and Ellen Wong (Jenny) — saw their push lead to "a series of poignant Zoom conversations" and a positive response from showrunners, per Mani, but Netflix ultimately cut the cord on the fourth and final season due to COVID-19.

Noting that Season 4 “would have been such a catharsis,” Mani wrote, “Our show creators and producers HEARD US. They were in the process of making Season 4 reflect some of the system problems we outlined.” Mani continued, “I was so afraid to speak on these issues to my bosses, whom I respect and I think are so brilliant, but was deeply moved by the support of my fellow cast mates. This was a huge deal — creating space for change — and it was a testament to the love and support that was, by no twist of fate, an intentional element seeded by our shows creators and germinated in the entire cast.”

“This is the part of GLOW’s ending that I grapple with as a larger metaphor for our times,” she added. “Our show-within-a-show was an ambitious, female-powered underdog that got cancelled. And here we are, life imitating art.” Mani explained that the statement "is not posted to save" the show, but simply "some personal stuff that we wanted to share."

The group shared the full contents of their letter, explaining that sharing it is a form of “personal closure” or catharsis. In it, they had cited the lack of people of color in the writer’s room (zero, to be precise) and the “racist and offensive stereotypes” imbued on characters of color. More specifically, they had outlined three requests for change: hiring an executive producer or consulting producer of color; addressing how stereotypical and offensive personas have impacted character of colors’ professional lives and dignity; and amplifying the voices and importance of their characters within the narrative.

The actors' posts were also full of mixed emotions. As much as they are proud of their courage, they are disappointed to never see their progress fully realized.

GLOW, which followed the adventures of a women's professional wrestling circuit (short for “Gorgeous Ladies of Wrestling”) in the 1980s, is the latest series to suffer a renewal reversal amid COVID-19. Netflix’s The Society, Showtime’s On Becoming a God in Central Florida, and Comedy Central’s Drunk History are a few titles that have experienced the same fate.